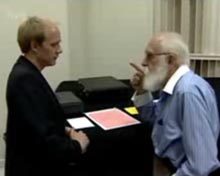 Derek Ogilvie is a UK medium who takes cold reading one step further by claiming to read the minds of babies and children[1], who are usually too young to pipe up and debunk the words he is putting into their mouths. Derek managed to fail not only the JREF Million Dollar Prize, but also a test at Goldsmiths College, University of London,[2][3] and yet still seems to believe he has psychic powers. The sort of money he continues to make can be seen by a 2017 lawsuit where he sued his Dutch promoters over what he called "an astounding amount of money", over £1 million, in a contract dispute.[4]

This parapsychology-related article is a stub.
You can help RationalWiki by expanding it.
Retrieved from "https://rationalwiki.org/w/index.php?title=Derek_Ogilvie&oldid=1958123"
Categories:
Hidden categories: