From RationalWiki
(Redirected from Million-dollar challenge)
Jump to: navigation, search 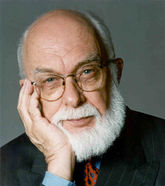 James "The Amazing" Randi (Born Randall James Hamilton Zwinge) (1928–2020) was a Canadian-American former stage magician and a scientific skeptic perhaps best known as a challenger of paranormal claims and pseudoscience. He was the founder of the James Randi Educational Foundation (JREF).

The foundation was headed by James Randi for many years before he retired from its presidency. From August 2008[4] to December 2009[5] astronomer, blogger, and pseudoscience debunker Phil Plait ran the organisation. Plait has been succeeded by D.J. Grothe, formerly of the Center for Inquiry. In 2013, former Foundation employee Carrie Poppy accused D.J. Grothe and to some extent, the entire Foundation of sexism and dishonesty and specifically of failing to heed women's warnings about potential threats. Ms. Poppy herself claims to have been assaulted at a Foundation event.[6] Several noted female skeptics have suggested that though no formal charges have been brought, either in the criminal or civil system, given the problems that the skeptical community has had with women, the Foundation would be wise to address the accusations before the silence itself becomes a bigger scandal.[7]

James Randi strongly opposed the pseudoscience of homeopathy.[8] Homeopathy is water "with memory." Randi has testified before Congress as to the fakery and lies of homeopathy. He has lectured across the nation and made several videos and blogs educating the public about the uselessness of homeopathy (apart from removing that bulge in people's pocketbooks). Randi has promoted the 10:23 challenge, in which people across the world would purchase homeopathic products (we will not give them the credit of calling them medicines) and purposely overdose on them. No one has ever died from the 10:23 challenge, and that is the point. Overdosing on homeopathic pills is near impossible, because there is no medicine in them, and that is what the 10:23 challenge is all about: to educate the world what is in these products and how ineffective they are.

On the Larry King Live show, Browne stated that she would take up Randi's challenge (that was on September 3, 2001.[14] To her dying day she did not take the challenge. Sylvia's first excuse was because she did not know how to contact Randi. That is comical: a professional psychic who speaks to dead people cannot figure out how to reach Randi. Her following excuse was that she did not want to take the challenge because Randi is a godless individual—all the more reason to take the challenge, Sylvia. If the supernatural could be proven and demonstrated, and the $1,000,000 were claimed, it would be a tremendous blow to Randi and the skeptical and atheist community, and a tremendous boost to her career as a psychic.

The Pigasus Award was an annual "prize" for unscientific claims presented by Randi, in the shape of a flying pig and awarded on April 1; it was originally called the Uri trophy, after Uri Geller, and had the form of a bent spoon (it should not be confused with the Australian Skeptics' Bent Spoon Award,[15] or the Flying Unicorn award given by COMCEPT, the Portuguese Skeptic Community.[16]) They were first mentioned in his book Flim Flam!, awarded from 1979-81, then suspended until 1996. The prizes appear to have been last awarded in 2013.

Generally they were given in four categories, for the scientist, funding organisation, and media outlet with the worst claim or activity relating to parapsychology in the previous twelve months, and the psychic performer "who fools the greatest number of people with the least effort"; some years, a prize was also given for "refusal to face reality."[17][18]

That being said however, that doesn't mean that the great Randi was somehow infallible. For one thing, Randi was an overt supporter of both social Darwinism and of actual eugenics, combining the callousness of vulgar libertarianism with calls for (somebody; presumably the government) quarantining and re-educating, en masse, those of our fellow human beings that are judged not to be of good enough stock to be allowed to reproduce, e.g. in order that they don't spread their insufficient IQ's.