Dynamiclear is a herbal product which is allegedly a treatment for herpes simplex (cold sore) infections. The manufacturer claims it has the ability to clear up outbreaks more quickly and more effectively than leading pharmaceutical treatments (such as Acyclovir). The marketing and evidence used to support the efficacy of Dynamiclear shares many characteristics with pseudoscience.

The Dynamiclear website, and, more importantly, the claims it makes, have changed significantly and repeatedly over the span of three years, making it difficult to assess the actual claims. Comparisons between revisions are explained in the relevant sections below.

The ingredients were added in October 2007, specifically listing:[2]

All versions state that they also recommend "Combined Lysine Formula",[6] which is a preparation containing 625mg per capsule of lysine, the dose being stated as two tablets per day (1.25g). 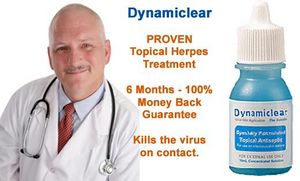 Advertisement on hubpages.com for Dynamiclear. Note the clear implication of medical use.

It is important to note that lysine is not an active ingredient in Dynamiclear but is also recommended as part of the treatment. This is interesting because lysine is the only ingredient listed that has been shown to be statistically effective against herpes simplex outbreaks in clinical trials with people, and even then, doses of between two and six grams per day are required to keep the virus at bay,[7] if it even helps at all.

The site claims that several active ingredients have been shown to be effective against herpes and other microbial infections.[8] One of the primary ones is copper sulfate, which they even contacted us to claim is one of the main active ingredients shown to be effective in "clinical trials." The paper they cite is an in vitro study that used large concentrations of copper sulfate on HSV in a petri dish.[9] Many promising cures that work in vitro fail in animal or human testing. The copper sulfate work cited is from 1997, and only marginal follow up work has been done on it, mostly advocating the use of copper sulfate on clothing as a potential anti-microbial. No in vivo work has been done to show that copper sulfate in the concentrations listed have any effect on HSV infections in humans.

The same issue appears with every other ingredient they claim is backed by scientific studies. At best there are one or two in vitro studies showing "promise", but none of this work has gone on to actually test what concentrations would work in humans, how it should be used, or even whether it really works at all.

Dynamiclear is different from other herbal remedies on the market in that instead of simply claiming it is "scientifically proven", it actually boasts of successes in clinical trials.[10] In fact, the manufacturers makes claims about successful Phase III drug trials. All of these claims seem to originate from the same clinical trial which was performed in India.[11]

It is an open question on why an Australian-based company would opt to pay for clinical research in India, but regardless there are many concerns with the study methodology and its choice of labeling. The first major issue is in referring to it as a Phase III trial at all. Phase III trials are the last stage in drug development, which follows a line of extensive in vitro testing on dosage and effect, animal testing, and limited human testing to see if it is effective in vivo and at what dosage and administration procedures. There is no evidence that any of these studies were ever conducted. A major Phase III trial without these preparatory steps would be a serious ethical breach, but the study cited does not appear to be a full Phase III test regardless of what they label it. A Phase III test usually involves upwards of 3000 people. The cited study has just over 100. In reality this study, regardless of its methodological flaws, is at best an early Phase II clinical trial. Not that this stops Dynamiclear reps from claiming that it has "completed Phase I, II and III comprehensive Clinical Trials (scientific double blind studies)"[12]

Now on to the methodological flaws. The basic procedure is outlined as follows:

So we can instantly see several problems with the protocol:

These issues were presented to Apothecaries Clinical Research, a major global clinical research organization, to see if they stand by this work as a legitimate Phase III trial. While standing by the work ACR stated that this research was a "proof of concept" and therefore was not bound by the normal standards of clinical research[13]. The phrase "proof of concept" is a code word in medical research for very early stage studies, mostly looking at basic safety of the drug, and using population sizes in line with those used in this study.

This means that the group who performed the research for Dynamiclear viewed it as, at best, an early Phase II study. Phase III is the gold standard for pharmacological research. It is the stage where efficacy of the drugs is established, and the stage after which regulatory bodies may approve a drug for treatment of diseases and symptoms. By claiming a successful Phase III study, Dynamiclear asserts this reputation, but in reality, even the company that performed the research did not view it as a true Phase III. Labeling it as such appears extremely disingenuous.

In addition, to show the product's lack of efficacy, the site sports a standard Quack Miranda Warning in an attempt to legally indemnify themselves against litigation by admitting the product's inability to provide proven results:

Nevertheless, Dynamiclear likes to frequently point out that their product is registered with both the FDA and the TGA (the Australian Therapeutic Goods Administration).[14] Approval by either agency does not prove efficacy, only safety. One could just as easily make parsley paste and have it listed with the FDA and TGA as a cold sore remedy.

They're also pushing a "Herpes Free Diet Guide"[15] written by "Dr" John Spurge, who is a "naturopathic doctor"[16]. If that's not enough to set off the woo-alarm, then the mention of superfoods and alkaline foods probably should. You need to subscribe to a mailing list to get the "free" e-book. Alternatively, of course, one could simply eat ordinary cooked food, which it typically free of viable herpes anyway.

A Google search for Dynamiclear scam returns many results. Most of them are purposely created pages which deliberately use the terms and then praise the treatment (often just through testimonials) or simply give a description of it.[17][18][19][20] This is a classic internet method of diverting traffic away from critical reviews of a product to pages which praise the product complete with a link back to the site.

There is no evidence that suggests that these pages were created by Dynamiclear themselves, and most of the sites have a disclaimer to the effect that they receive commissions from the products they are promoting.[21]

Around the same time the ingredients were changed, the main site webmaster tweaked its code to prevent right-clicking and highlighting text. Dynamiclear has claimed that this locking is to prevent competitors from stealing their content, though it would not prevent someone from merely copying from the page source. However, it does have the effect, intended or not, of making criticism and quotation of site material slightly more difficult.