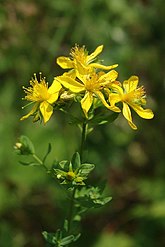 St. John's wort, Hypericum perforatum, is a flower which was traditionally used by ancient Greeks to ward off evil.[1] St. John's Wort can refer to any member of the genus Hypericum, but most often it refers to H. perforatum. While the plant does have some minor medicinal properties, and its extract is effective against some forms of depression[2] and inflammation,[3] the plant is sometimes marketed as a miracle cure. Research is currently being carried out on the flower and its potential use in medicine. In the meantime, unless a German doctor has prescribed you the drug, St. John's wort is an invasive weed which cranks effectively market as the cure for any malady their imagination can invent. "That will be $50 for the consultation and $20 for the capsules, please."

The German health care system prescribes St. John's wort in some cases of depression as well as for burns and skin lesions.[1] A meta-analysis of clinical trials found that that St. John's wort extracts are more effective than a placebo in treating depression and similar to pharmaceuticals used to treat depression but with fewer side-effects.[4] In 2000, the FDA advised against its use with certain drugs, pointing out that it can interfere with some medications.[5] It may worsen some mental conditions (ADHD, schizophrenia and dementia) rather than alleviate symptoms.[6]

Sold as capsules, tincture, or tea, St. John's wort is marketed as a mild cure for depression, but also for other diseases. Donnie Yance (a certified nutritionist), through a very scientificky-sounding analysis, claims that SJW has clear-cut amazing anti-cancer properties and is an effective cure for depression.[7] The citations given are for in vitro experiments (i.e., cells in a dish), which are not very impressive, really. More impressive would be in vivo (animal studies) or epidemiology (human) studies. However, without an overall analysis of studies, there's not much to conclude. Even known carcinogens can have anti-neoplastic effects in some circumstances.

According to Annie's Remedy, St. John's wort is a tonic for the entire nervous system.[8] Dr. Pressman (a highly educated chiropractor) is absolutely gaga for St. John's wort and is convinced it can help you with fighting viruses. He even wrote a whole book about its unbelievable neuropathic capabilities.[9] Can't find a Big Pharma chemical cure that works for herpes? You're in luck, because St. John's wort is proven to take care of those too. Tired of pre-menstrual cramps? St. John's wort. Need to sleep after watching a scary Stephen King movie? St. John's wort. Feeling gassy after visiting a Mexican food buffet? St. John's wort. Worried that none of these cures are effective? Don't worry — keep buying it and taking it, because it may take a really long time before they become effective.[10]

St. John's wort may interfere with drugs for contraception, as well as for depression and other diseases.[2] St. John's wort may have other, generally mild, side effects such as sexual dysfunction, gastrointestinal upset, increased anxiety, minor palpitations, photosensitivity, fatigue, restlessness, dry mouth, and increased depression.[2]

In traditional Chinese medicine, H. chinense (jīn sī táo 金絲桃) has been used as an astrigent for "miasmatic" diseases and for snake bites.[13]