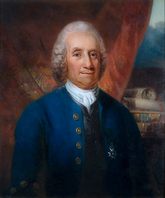 No, not the Borg, Swedenborg

Emanuel Swedenborg (1688-1772) was a Swedish polymath and religious leader who "lived during the height of the Enlightenment", a time when European intellectuals rightfully repudiated dogma in favor of reason and the scientific method. Swedenborg was both an expert scientist and a deeply devout Christian, with his first works revolving around metallurgy and anatomy. Swedenborg, in his middle age, suffered a psychotic break crisis of faith while sleeping. He started experiencing night terrors that he regarded as "visions" from the supernatural, and so he started to spread the Good Word of his delusions revelations from the divine by writing the Arcana Coelestia in 1749. Swedenborg himself was never charged with heresy, but two of his followers were when they wrote articles discussing Swedenborg's ideas. Ultimately it was declared that "Swedenborg's works were not heretical, but did contain doctrinal errors". His books were then banned from Sweden and his two followers were kicked out of their teaching positions. Swedenborg himself died of a stroke in 1772, being 84 years of age at the time of his death.[1]

Swedenborg's venture as a scientist were wide and varied, and he was arguably somewhat of a crank, but his work was still valuable in regards to some of his "scientific" endeavors. He first traveled to England where he studied under many notable scientists and mathematicians of the era, and his first forays into science were of the applied sciences, Swedenborg himself was an inventor. He even drew up descriptions of a so-called "flying machine", but sad to say he never put it into fruition. He did devise a series of water pumps that he would later put to use when he worked for Sweden's Board of Mines, which is where he made his arguably most important discoveries. His experiences with mines, mining, and metallurgy led him to write a three volume treatise on the subject titled Opera Philosophica et Mineralia (1733), and it is in the third and final volume of this series wherein he first outlays his views on the metaphysical nature of the cosmos.

He believed that all of nature originates from a series of "first points" that spin around, creating "bubbles" that then form the basis of all matter. He defines these "points" as "occupying the space that divides the finite from the infinite." His interest in the origins of matter led him to study anatomy, and the results of his studies were somewhat of a mixed bag. By using the newly-invented microscope to analyze blood, he theorized that blood somehow contained a "spiritual essence" that somehow "contained the soul", and then concluded that the "seat of the soul was in the brain, specifically the cerebral cortex." He did however correctly describe the "central role the cerebral cortex plays in the sensory, cognitive, and motory aspects of the nervous system", as well as a few other things, that wouldn't be rediscovered for more than a century.[2]

Swedenborg considered his theology to be the true, revealed form of Christianity that had been hidden throughout the centuries, as any new denomination typically considers itself to be. He believed that the entirety of the Bible was an allegory regarding humanity's journey from the material to the spiritual realm, a liberation of the soul, if you will. Swedenborg also posited that everything supposedly about mankind found in the Bible could also be related to the story of Jesus Christ, specifically how Christ represented the liberation of man's soul from the materialistic realm and man's entry into the divine.[3] If all of this sounds familiar, that's because it is.

Swedenborg did however have some neat ideas about marriage, believing that partners were equal and marriage was supposed to be about love, and not anything else such as honor, and that when couples entered the afterlife and they were unhappy with each other, they were given the option to have new spiritual partners. Swedenborg himself was never married, remaining a bachelor all his life, but that didn't stop him from writing voluminously about it.[4]