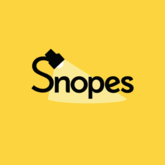 Snopes.com is a website founded by Barbara and David Mikkelson (David has also used the pseudonym Jeff Zarronandia[1]) that dedicates itself to researching and confirming the truth behind stupidity urban legends, chain e-mails, and other stories of uncertain origin. Some of this includes various forms of woo, religious stories, and myths about politicians (Barack Obama, George W. Bush, Sarah Palin, Mike Huckabee, and Bill and Hillary Clinton all have their own sections).

Woo-pushers, the fringe on either end of the political spectrum, and those who benefit from these stories tend to dismiss Snopes as wrong or biased, despite research showing it isn't. The writers of many chain emails have found a different way to help neutralize Snopes' effectiveness, by announcing that their claim was confirmed by Snopes (since few recipients will check to see if it really did).

Lest people think Snopes is simply biased or just plain cynical, a surprising number of myths actually turn out to be true (although usually in a much more mundane way than the chain letters imply). Randomly browsing Snopes is a fun way to kill your day, right up there with TV Tropes and Cracked.

Snopes articles usually consist of little more than a claim that they investigated, the site's findings on the veracity of that claim, and citation footnotes. On May 15, 2015, the site chose to publish a more detailed article showing the methodology they used to rebut one long-time Hollywood myth -- that Clark Gable had killed a pedestrian while driving drunk in 1945 (or was it 1933?) and the alleged coverup by MGM that ensued. Their results show how two separate incidents in Gable's life, one possible incident in the life of John Huston, and the willingness of people to believe the worst about the movie industry, combined in the minds of those who were reminiscing about Gable to form one scandalous (and slanderous) story that has since become part of the canon of Hollywood history.[2]

"Snopes" was originally a name taken from the novels of William Faulkner and used in online forums by computer scientist David Mikkelson. He was a regular of Usenet group alt.folklore.urban, a forum dedicated to sharing, analysing, and sometimes debunking urban legends. He met a Canadian woman, Barbara Hamel, on the forum, and they married and set up home in California. Snopes was established in 1994 by the two of them as an offshoot of alt.folklore.urban; in the early years it did not have a political focus and centred on investigating and debunking all kinds of myths, old wives' tales, and folk wisdom.[3]

David lost his job in 2002 and began working full-time on the site, which from 2003 was owned by a company Bardav Inc, with ownership shared equally by David and Barbara. David did the technical side, Barbara the financial side, and both researched and wrote articles. With 9/11 and then the unfounded rumors about Barack Obama's nationality, it began to move into more and more political areas. It really expanded following 2014, when it hired Kim LaCapria as a researcher/writer, and then took on additional staff. The rise of Donald Trump and the increasing prevalence of fake news made it an ever more important resource.[3]

To the glee of conspiracy theorists, fraudsters, and other enemies of the site, David and Barbara's marriage went down the pan in May 2014 amid accusations of infidelity against David (in 2016 David remarried, to Elyssa Young, a former Libertarian Party candidate). The Daily Mail gleefully reported on all the marital troubles as well as the bitter fight for ownership of the website. By 2016, the site had revenues of up to US$ 200,000 per month, so it was a valuable property, and the disputes between Barbara and David were acrimonious. In July 2016, she sold her stake to Proper Media, which was already acting as Snopes.com's advertising broker. David in turn broke off the agreement to sell advertising via Proper Media, which however remained the co-owner, and it descended into even more bitter litigation. The result was a 2017 GoFundMe campaign by David Mikkelson to "save" the site and help him re-establish his control.[3] This proved successful, but all the struggles were greatly amusing to the Daily Mail and other purveyors of fake news.

As of 2017, Snopes had 13 staff, including researchers, technical, and graphics.[4] Shortly after the 2016 US Presidential election, Facebook announced it would partner with Snopes and four other fact-checking sites to rate the truthfulness of news stories shared through the social network — something that cost Facebook a pittance and was basically a PR scheme dreamed up by Facebook.[5][6]

For more detail on the way cranks always react to skeptics, see our articles on Guerrilla Skepticism on Wikipedia and the shill gambit.

Anyone who insists that their personal myth is fact, whether that be moonhoaxers, 9/11 truthers, or bigfooters, will insist that Snopes is wrong because everyone but themselves is biased against the "truth". FactCheck.org, a nonprofit website dedicated to, umm, checking facts, reported that Snopes was completely unbiased.[7] According to Media Bias/Fact Check, Snopes has a rating of "left-center".[8] This of course proves that both FactCheck and Media Bias/Fact Check are also part of the conspiracy.[citation NOT needed]

In an extraordinary example of media eating itself, fake news merchants have distributed a meme on Facebook saying that FactCheck.org had condemned Snopes as an "extremely liberal propaganda site". The meme also claimed that Snopes was associated with George Soros (supposed boss of the international Jewish conspiracy) and the Democratic National Committee. FactCheck.org duly published another article praising Snopes's lack of bias and totally debunking this claim and associated photographs that wrongly identified Hungarian ex-PM Gordon Bajnai as Mikkelson.[9]

If you were to visit the website prior to 2014, you would get horrid flashbacks to the dark ages of the intertubes, when everyone used Geocities

and people still made jokes about AOL free trials. Luckily, the website finally underwent an overhaul, which spares users' sight-bladders.

See the main article on this topic: Plagiarism

In 2021, co-founder David Mikkelson (but none of the staff writers) was discovered to have engaged in plagiarism in dozens of stories that he had written.[1] Mikkelson and Snopes have acknowledge and apologized for this behavior.[1]