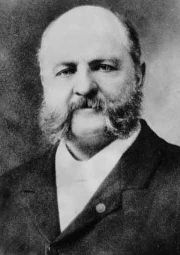 Anthony Comstock (1844–1915) is one of the reasons Americans are so squicky about abortion, birth control, pornography, and sexuality in general. While his title was United States Postal Inspector in the late-19th/early-20th centuries, Comstock bragged that he caused fifteen people to commit suicide and had arrested 4,000 people.[2] In addition to the arrests and suicides, Comstock is estimated to have destroyed 15 tons of books, 4 million pictures, and 142 tons of printing press plates. He seems nice.[3]

The Comstock Act[4] was a law that made it illegal to send "obscene, lewd, and/or lascivious" materials through the mail, i.e. pornography. However, the law also banned sending contraceptives and information about contraceptives, as well as educational information about abortion through the mail.[note 1] Thanks to these laws, during World War I, American troops were sent abroad without condoms, resulting in a very high STD rate.[note 2] The law was popular, and state level laws were also enacted. New England was under draconian law for years, with birth control being completely illegal in Connecticut until 1965's Griswold v. Connecticut decision, and nearly illegal in Massachusetts; the other states were little better.[5]

The New York Society for the Suppression of Vice[edit] 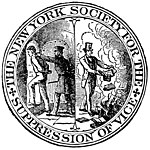 Their emblem: Book burning and imprisonment

Comstock founded the NYSSV along with his supporters, the YMCA; it was essentially the exact opposite of the ACLU. John S. Sumner succeeded Comstock as the head of the NYSSV after the latter died in 1915,[7] continuing to burn books, and prosecuting purveyors of allegedly obscene literature with the help of the New York City Police Department.[7] The NYSSV eventually disbanded in 1950.[7] They are most famous for their opposition to Lady Chatterly's Lover by D.H. Lawerence, though they protested many other works, such as James Joyce's Ulysses,[8] and the works of Oscar Wilde.[7] At one point, it was actually alleged that the NYSSV was actually selling porn that it had previously confiscated.[9]