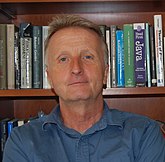 Eric Turkheimer is the Hugh Scott Hamilton Professor of Psychology at the University of Virginia.

Turkheimer has coined what he calls the "three laws of behaviour genetics":

In contrast to other contributors in the field, such as Robert Plomin, he emphasizes the fact that we have in very few cases demonstrated specific causal links between genes and behavior.[2]

Turkheimer is critical of hereditarianism about differences in average IQ scores between one race and another[3], and argues they are best understood as environmental in origin.[4]

This article is a stub.
You can help RationalWiki by expanding it.
Retrieved from "https://rationalwiki.org/w/index.php?title=Eric_Turkheimer&oldid=2067245"
Categories: