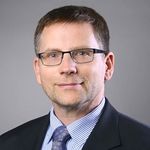 Heiner Rindermann (1966–) is a HBD pseudoscientist from Germany who currently sits on the Editorial Board of the controversial journal Intelligence and "whose work is often cited by racists seeking to prove that immigrants have low IQ".[1] Rindermann himself is associated with the far-right, for example he spoke at a Property and Freedom Society

conference in 2016, delivering an anti-immigration talk: "Cognitive and Cultural 'Enrichment' of Europe by Immigration".[2] Annual conferences by the PFC have been described as "serious academic racist events" by the SPLC.[3] He also attended the London Conference on Intelligence with white supremacists, neo-Nazis and Emil Kirkegaard with whom he reviews papers for OpenPsych.[4] Rindermann identifies as a racialist, for example in his book Cognitive Capitalism he argues for the existence of human races.[5]

Rindermann's pseudoscience is popular among white nationalists since he argues immigrants from the Middle East and Africa have lower IQs than native ethnic groups from Europe and that these mean group differences (that he overestimates to begin with) are significantly the result of genetics.

His writings on race and intelligence are for example promoted on VDARE,[6] The Unz Review[7] and the far-right The New Observer:

Nonwhite invaders tested at Chemnitz University in Germany have average IQs of around 93 and this is going to cause "cognitive errors" with enormous consequences for the rest of society, one of that country's leading psychology professors has warned… Professor Heiner Rindermann, chair of Educational and Developmental Psychology at the Technical University of Chemnitz, has penned a penetrating article in the Focus Online German news service where he has spelled out the importance of IQ, culture, achievement, and its relationship to race.

Titled "Secondary School Level Engineers," the article states unequivocally that the mass importation of low IQ nonwhite immigrants is going to lead to the destruction of Germany. "The standard of education of most immigrants from Western Asia and Africa is low, and their capabilities are limited. The consequences of this will be bitter," Professor Rindermann wrote.

…the majority of these "immigrants" have no qualifications at all. Even if they did… they would still be useless: All international university studies have shown that the average results obtained at the institutes of higher education in these countries average around 110 points less than similar institutions in Germany…

Evolution vs. culture as background factors for international intelligence differences

Until now all genetic explanations of international intelligence differences suffer from hard and replicated evidence on cognitive ability coding genes and their biological mechanism. However, there is first direct (based on coding genes) and broad indirect evidence. The paper will summarise the findings: Genomewide association studies have detected first candidate genes coding intelligence and differences in intelligence at the individual as well as at the cross-country level. Differences in cognitive ability vary with genetic markers standing for a different evolutionary history. Genetically more similar nations are also more similar in intelligence also if further factors are controlled. Morphological features and indicators of evolution (cranial capacity, skin brightness) highly correlate with results in international intelligence and student assessment studies. Bigger brains lead to higher intelligence. Evolutionary theories explain the development of differences between peoples in psychological traits. There is evidence for recently accelerated evolution among humans. Deleterious effects of consanguineous marriages underscore the effect of genes on cognitive ability at the level of individuals and nations and also show that genetic effects depend on culture. Current humans can be distinguished in different evolutionary branches usually named for living beings subspecies. The total evidence indicates that recent evolution, in the last 20,000 to 100 years, is more important for current human macrosocial differences than former evolution.

Population genetics in intelligence research: How much can it help to retrace the evolution of intelligence?

The inequality of national, ethnical, cultural or racial defined human populations in intelligence was tried to explain in different ways. Although, inside this issue, we are facing a multi-causal problem, genetic factors are taken into account of many researchers as a more or less important factor. Several theories (cold winter, evolutionary novelty, Neolithic revolution, differential K) about influences of environmental conditions on the evolution of intelligence have been proposed, however, no genes have been found to explain bigger parts of intelligence variations on the individual level hitherto, thus the empirical tests of these theories is difficult. In our talk we want to communicate our ideas and results from the use of methods from population genetics. In the first part, we want to show to the audience how genetic variations, called genetic "distances" between today's populations can partly explain their differences in intelligence, also by taking into account geography, climate and social development variables. Part two includes a look behind these genetic distances and on prehistoric human migration. There we found a pattern we called "cold Siberia hypothesis" which should be demonstrated, explained and brought up for discussion. This also includes an outlook on planned future work and research.