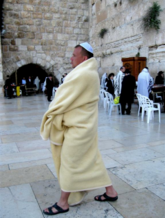 "He's not the messiah, he's a very naughty boy!"

Jerusalem syndrome is a rare psychiatric disorder described by Dr Gregory Katz (head of the Emergency Unit at the Givat Shaul Mental Health Centre) in the British Journal of Psychiatry in 2000.[2]

Sufferers arriving in Jerusalem are afflicted with the delusion that they are characters from the Bible, the Torah, or the Koran, or are, in some other sense, a messianic figure.

Most patients are middle aged from small towns in the USA or Scandinavia. Jet lag and lack of sleep could possibly be contributing factors, though travelers from Scandinavia barely leave their timezone.[3]

The inherent link between religiosity and mental illness[edit]

The late Christopher Hitchens doesn't fail to put the Jerusalem syndrome in context to the concept of revelation and an invisible being who influences people, writing on the topic of the syndrome:[4]

The connection between religious faith and mental disorder is, from the viewpoint of the tolerant and the "multicultural," both very obvious and highly unmentionable.

If someone murders his children and then says that God ordered him to do it, we might find him not guilty by reason of insanity but he would be incarcerated nonetheless.

If someone lives in a cave and claims to be seeing visions and experiencing prophetic dreams, we may leave him alone until he turns out to be planning, in a nonphantasmal way, the joy of suicide bombing.

If someone announces himself to be God's anointed, and begins stockpiling Kool-Aid and weapons and helping himself to the wives and daughters of his acolytes, we raise a bit more than a skeptical eyebrow.

But if these things can be preached under the protection of an established religion, we are expected to take them at face value.

All three monotheisms, just to take the most salient example, praise Abraham for being willing to hear voices and then to take his son Isaac for a long and rather mad and gloomy walk. And then the caprice by which his murderous hand is finally stayed is written down.

Dude, haven't you heard about Deuteronomy 22:11?

Because there are so many self-proclaimed messiahs arrested every year, rabbis had to define the messiah to exclude such people, without unintentionally condoning the arrest of the real messiah, should he appear. Their official explanation is that, by definition, the real messiah will be self-evident, and everyone will automatically know he is such. (This position, interestingly, disqualifies Jesus from being the messiah, because there were those who met him and still doubted him (e.g., the Sanhedrin and most Roman officials), but Jews don't believe Jesus was the messiah in the first place so whatever.)