From RationalWiki
(Redirected from Ernst's Law)
Jump to: navigation, search 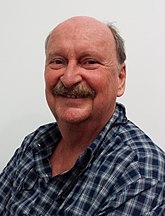 Professor Edzard Ernst (1948–) is the Emeritus Professor of Complementary and Alternative Medicine (CAM) at the Peninsula School of Medicine. When appointed to the Laing chair in Complementary Medicine at the University of Exeter in 2002, he was the first professor of complementary medicine in the world. Don't let the "CAM" in his titles fool you, he is a Fellow of the Committee for Skeptical Inquiry, a member of the medical board of the Medicines and Healthcare Regulatory Agency, and a founding board member of the Institute for Science in Medicine.

He is regularly the subject of ad hominem attacks from CAM practitioners who have difficulty dealing with his deconstruction of the anecdotes that they present in lieu of evidence for the 'efficacy' of their activities.

Since retiring from full-time academic work in 2012 he has devoted himself to being a thorn in the flesh of quacks and charlatans for as long as he is able. He is very active on Twitter and on his blog.

Ernst gained M.D. and Ph.D. degrees in Germany in the late 1970s, and received training in a number of alternative therapies including acupuncture and massage therapies. He later moved to become Professor of Physical Medicine and Rehabilitation at the universities of Hanover (1988) and Vienna (1990). Unlike many in the alternative medicine world, Ernst focused his research on actual efficacy of the practices involved — driven by a genuine curiosity to see if the treatments worked, rather than an urge to confirm and sell them. He therefore became a strong critic of homeopathy, describing it as "among the worst examples of faith-based medicine" in the American Journal of Medicine.[1]

He was editor-in-chief of two journals: Perfusion and Focus on Alternative and Complementary Therapies (FACT). He also writes on evidence based medicine for The Guardian and on the doctors' website Pulse.

He is the author of a number of books, notably, with Simon Singh, Trick Or Treatment, a review of many popular alternative therapies and the evidence (or lack of it) behind them. He is a trenchant critic of woo and withdrew his name from the Smallwood Report into CAM because he said Smallwood had "written the conclusions before looking at the evidence"; the report did not address whether CAM treatments were actually effective and Ernst described it as "complete misleading rubbish."[2]

Ernst's Law, attributed to Andy Lewis of The Quackometer, states: