Agrimonia: the remedy for unmasking
Not to be confused with Biofield flower therapy.

The Bach flower remedies are a system of remedies put together by Dr Edward Bach (pronounced "batch") (1886-1936), each aimed at a particular mental state or emotion. They are not quite homeopathy, though are still moderately silly. Nonetheless, Bach was very much a homeopath and dabbled in spiritual writing.

Bach was a medical doctor working in general practice. Dissatisfied with this work, and recovering from cancer, he turned to more holistic methods of treatment. As his official biography puts it:[1]

Just as he had abandoned his home, office and work, Dr Bach began to abandon the scientific method and its reliance on laboratories and reductionism. He fell back instead on his natural gifts as a healer, and more and more allowed his intuition to guide him to the right plants.

He came up with 38 remedies that he believed covered the full gamut of negative emotion.

The theory is that the flowers have subtle energy at a particular frequency, which has the same energy as a specific negative human emotion. It cancels out this emotion and the patient's life force flows freely again and the body can heal itself.[2]

The way the flowers were actually chosen was that Bach wandered the hills of Oxfordshire, England seeing how the dew from particular flowers made him feel. That's it.[1] 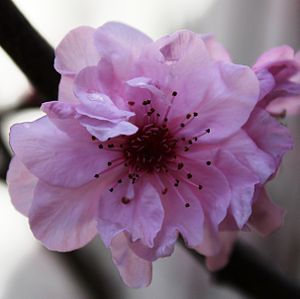 You pick flowers and steep them in a bowl of 50:50 water and brandy under sunlight. If this is impractical, the brandy and water may be drunk the flowers may be boiled. This makes the "mother essence", which is then diluted at 2 drops per 15mL into "stock bottles," which are further diluted at 5-7 drops of stock per 30mL "dosage bottles" which are sold to the sucker.

For those who can't be asked to declare their chief complaint, an all-purpose mixture is available, sold as "Rescue Remedy" containing equal amounts of:

It's not quite homeopathy because there's no succussion step and the preparation might actually contain detectable molecules from the flower.

None,[3][4][5] though the brandy on its own has been known to be effective in making the user feel better.

Author Philip K. Dick used them in the Valis trilogy to propose that the actual purpose of the flower remedies is to foster discussion between medical practitioners and their patients, allowing mental health care practitioners to make more accurate diagnoses and better provide their patients with real aid. (It's worth noting that Dick believed that most of history was an illusion, that the original Roman Empire still existed, and that Nixon was the current emperor. The fact that even he found the Bach remedies too far-fetched should tell you something.)

In the UK, Bach flower remedies are regulated as a foodstuff, not a medicine. Legally, sellers could still make EU-permitted substantiable health or nutritional claims,[6][7] but the Advertising Standards Authority has ruled that such claims cannot be made about those Bach remedies with a high alcohol content (most of them: 25%-40% by volume).[8][9]