As a bureaucrat of the former wiki project Ameriwiki, I have an interest in this and a few others may as well. This is my take on the former project, and a preservation of the articles that have since been deleted. Thus, the project will have some record of its existence. My notes are in bold and italics. 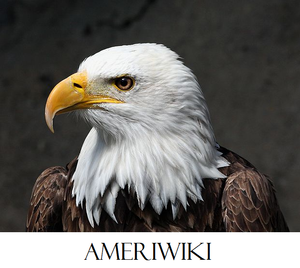 The current Ameriwiki logo. Removed from RW, so yeah.

Ameriwiki is a conservative wiki-based website with a stated objective of being friendly to differing points of view. Originally, it was described as having an Americentric, conservative point of view that was friendly toward Christianity and young earth/old earth creationism. This was changed after George Fitzgerald was permanently removed from the project for his unruly behavior, and a few users decided to change the mission statement to be more like Wikipedia than any conservative wiki, which may have contributed to its stagnation and eventual downfall. It was created in June 2011 by the user "George Fitzgerald" It is unknown whether this is his actual legal name. His first user name on site was GeorgeF, and he went by GFitz during his brief stint on CP. following a visit to RationalWiki discussing the concept for a right-wing American Christian website that wasn't as embarrassing as Conservapedia "by being much more tolerant and accepting to editors of other worldviews, and having a radically different blocking policy".[1][2] George ended up engaging in nepotism and unfair bans much like Conservapedia, along with his friend Ronald. The George/Ronald/ElvisFan side and the SamCoulter (webmaster of the Ameriwiki.org domain upon George's consent) and co. side became the two factions fighting during the latter part of Ameriwiki's existence, and ultimately, Fitzgerald's side lost due to Sam having control over the site. It currently has over 1000 articles. Many of those were minimal stubs, or articles the authors imported from other wikis that were their own work. Or in a few cases, someone else's work, with or without permission in various instances. Very few substantive articles originated on site. Many of these high quality original articles were math and physics related articles added by User:SamHB and User:AndyFranklinson.[3] The latest project seems to be a drive to create actual encyclopaedic content; an Ameriwiki admin That was me. has pirated Wikipedia's list of required articles and is encouraging people to create the whole list. Spoiler alert: it never happened past the top 100.

It initially became the latest haven for Conservapedia refugees After A Storehouse of Knowledge, ranging from longtime editors such as Rob Smith He imported a great deal of content from his work at Conservapedia, and it was drastically revised and cut by the SamCoulter faction of the site. Rob wasn't happy to say the very least. and to new users who were upset with Conservapedia's Conservative and his edit spree on bestiality. Ameriwiki in practice was essentially Conservapedia without bestiality or machismo articles.

The current wiki is owned by Sam Coulter He was rumored to be named Fergus Mason, after George received emails making the claim. During the lifespan of the site, this was neither proven nor disproven. (a banned repeatedly banned Conservapedia user), who also currently leads the site. His complete reign was more accident than anything else. Before his shenanigans, it was intended that Fitzgerald would retain control of the project, while Coulter owned the ameriwiki.org site, which Fitzgerald agreed to, and gave permission for the Ameriwiki name and brand to be used after moving from the Wikkii site he still owned. He was only removed from the project after numerous temper tantrums, acts of vandalism, and failed wiki coups to attempt to remove Coulter. George Fitzgerald left the site on February 21, 2012, to create a new video game wiki creatively named Video Game Wiki that was active for less than two weeks. Many of Fitzgerald's Ameriwiki articles were actually about video games. Sam Coulter briefly edited the Video Game Wiki, and penned an article on Space Invaders. The defunct wiki can be found here. He came back a while later only to attempt force his will on the wiki, and resorted to vandalism when other users forbid him to do so. He was eventually banned permanently from Ameriwiki, and founded "Conservatism wiki" at here. Ameriwiki troll James Wilson, under the user name of Elvis is King was immediately made an administrator, and proceeded to make a joke of the main page. Conservatism Wiki's list of reasons for blocking users bears absolutely no resemblance at all to Conservapedia's. Shortly after he was banned from Ameriwiki, it was announced at Conservatism Wiki that George Fitzgerald died on a car accident on June 3, 2012. The announcement was made by user Ronald, who claims to be a personal friend of George.

Userbase and point of view[edit]

Ameriwiki is a Christian-friendly and conservative-friendly wiki and keeps a focus on US issues. The site is open to different opinions on the origin of the universe and of life and does not censor any POV.

Initially all the non-wandal editors were from RW and much of the initial content came from a RW user and a disgruntled former Conservapedia Sysop, grunting out Cold War nonsense and the site owner made a few minor POV edits and stubs on things, and making policies and stuff. They adopted an ASKesque blocking policy which is also being drafted.

Ameriwiki has kept its promise of not banning users and being inclusive by only banning a Colbert troll for a single day and allowing a mainspace article on Lady Gaga. This also extends to user rights, being reluctant to remove rights from those who abused them.

Certain Conservapedia Users have shown up at Ameriwiki seemingly to wreak havoc.

James Wilson appeared at Ameriwiki only to troll one of the Administrators, presumably because of his politics. He engaged in relentless name-calling of the Administrator, and ad homenim attacks strangely involving celebrities. After much chaos erupted, he finally surrendered and accepted an infinite ban, which was enacted. As of February 2012 Wilson has been allowed back in by George Fitzgerald, apparently much to the disgust of Coulter. This raises the interesting prospect of a fight between the guy who founded the site and the guy who can directly edit the user database. On February 10, Wilson was again banned, with his user and talk pages deleted, due to a consensus by the "Sanction Committee" to remove him from the site. He was also removed from the newly formed Ameriwiki forum. He decided to get revenge by making useless accounts with names such as "ChickenForBrainsLovesTaylorSwift" and "Westboro baptist church". They were banned and removed from the recentchanges by Coulter.

Though saner than Conservaepedia (though that's not saying much) the site still promotes some nonsense and shouldn't be used as a trustworthy source. For instance:

The original thread on this website[1] suggested the working title Ameripedia - "a merry pedia". Geddit?

They seem to have gone for a version of this as their seasonal greeting: Ameri Christmas.

Preface: this is a heavily biased article and is biased against the SamCoulter faction of Ameriwiki, and is hilariously pro-Fitzgerald. This is included because this is the only other article about the site that existed, and it provides insight into the problems the site faced. Nonetheless, take any claims the article makes with a grain of salt because this is indeed a very one-sided history on the project.

More may be added soon at the discretion of the author. Spoiler alert: no more was ever added.

Ameriwiki: the "thinking man's conservative encyclopedia". This "joke" refers to a slogan SamCoulter once placed on Ameriwiki's main page. Founded in June 2011 by George Fitzgerald, So far, so good on accuracy and neutrality the site was usurped from him and it already ruined itself with bias. Shocker. without his knowledge by the vile Fergus Mason Throughout this article, SamCoulter is referred to as Fergus Mason, since the slant of this article is that a German atheist pretending to be a conservative took over Ameriwiki to turn it liberal. I chose not to change the references to SamCoulter which would avoid confusion to preserve the original content and intent of the article. (also known by AW username SamCoulter, YouTube atheist Voiceoftruth2006, GeorgeLi, et al. Unsubstantiated claim made by Wilson and Fitzgerald after a Conservapedia admin claimed such. Again, it was neither proven nor disproven.) with deceit and trickery. Fitzgerald consented to it knowing full well Coulter would be site owner and bankroller of the Ameriwiki.org site. It is America's source for everything Cold War, Taylor Swift, and utter nonsense. Of course, referring to Rob's McCarthyite hysteria, my one Taylor Swift article, and whatever else he didn't like. Wibble wibble wibble. A reference to a phrase Coulter used when reverting Wilson's vandalism. Wiktionary defined it as "Meaningless or content-free chatter in a discussion; drivel, babble." It's UK Internet slang apparently, so being a Yank, this is the only time I've seen it used.

Ameriwiki was founded by George Fitzgerald as a conservative, Americentric, Christian-friendly encyclopedia with a less hostile editing environment than what is perceived of Conservapedia. The hostile beast that is CP eventually consumed even Jimmy. It was created on a wiki farm after a RW post. Civic Cat and Maratrean joined. Then refugees from CP showed up, like Nobs01, Fergus, SharonW, and SamHB. And of course, Fergus and RW troll Colonel Sanders (hereby referred to as "Chicken Boy") Chicken Girl were sysopped. User:ElvisFan (me) joined the site in the hopes of contributing something substantive, and questioned Chicken Boy's Chicken Girl libertarian politics. He demanded that I was desysopped because he thought that I wasn't conservative enough. He called me a pot smoking fetus hater or something like that. I was blocked. I was also blocked for telling the truth about AW being tolerant toward libertarianism. He was blocked for vandalism, trolling, harassment, which he's also done on other sites. He's also created multiple accounts on different sites. Fergus offered to pay for moving the site to proper hosting because some wussies didn't wanna look at anime porn. Very Christian to say that. There, George was usurped. George lost control of the new site. Fergus trolled CP. Sharon, SamHB, et al. were sysopped. Chicken Boy added some bullshit. Then, he began his long-standing obsession with Taylor Swift. I was banned for questioning his liberal leanings toward Swift. I was permabanned, let back in by George, and banned at the hands of Fergus for telling the truth about RINO politicians, Iran wanting to destroy civilization to provoke the Mahdi, among other things. George started fighting back against Fergus and his goons with his buddy Ronald, but they were permabanned. George died and Fergus had complete reign then. The wiki became "tolerant in most matters" and in effect became unconservative.

Players (listed in the order of importance)[edit]

George Fitzgerald, the father of his wiki

Ameriwiki is rife with liberal bias. Here are some of the examples: