A Storehouse of Knowledge

From RationalWiki
(Redirected from ASK)
Jump to navigation Jump to search

PJR's Creationist Grievance Collection was a moribund open editing,[note 1] punk rock and ska[1] encyclopædia written from a Biblical point of view, in Australian English.[2] It was the brainchild of Philip J. Rayment, and represented the second major splinter from Conservapedia (after RationalWiki),[note 2] Conservapedia itself being a reaction to Wikipedia. As such, it might be better titled "A Storehouse of Speculation" (aSS?).

aSK was aimed at misrepresenting a number of fields of science, history, law, linguistics, and philosophy to conform to PJR's particular "literal" interpretation of the Bible. Rayment favored interminable discussion, which he dominated with fisking down to splitting his discussants' sentences, over substantive editing. Unsurprisingly, he favored a creationist source over anything they can characterize as in any way antagonistic to creationism. Dozens of RationalWiki masochists editors signed up on the site in the initial rush, after which the only RW editors that remained were a tiny handful of unlucky bastards with the degree of olfactory disability necessary to interact with Rayment.

The hierarchy at aSK was never well established, but if the user rights groups are anything to go by, it was intended to be almost as tightly managed as RationalWikiWiki.[3]

In theory, used colloquially not scientifically, the ranks from top to bottom, based on the number of rights:

In practice, the hierarchy was:

In keeping with the Conservapedia tradition of making editing as hard as possible, one was required to obtain the rank of member before one could upload images, move pages, or skip the captcha. An editor could move the subpages of their userpage, which was novel. Senior members could delete pages with less than two revisions and could participate in certain votes and committees.

In a display of some reasonable foresight, the ability to delete and restore page histories belonged only to bureaucrats.

To avoid any unpleasant tinge of democracy and to avoid any unbiblical worldviews leaking in to the upper echelons, members were elected to a higher rank by a vote of their seniors rather than their peers, or by being "known to management" (colloq. nepotism.) This was a wonderful mechanism for aSoK to develop its very own cabal.

Copyright terms at aSK have been controversial and the subject of debate. The terms originally stated that all content was the property of the site - effectively requiring editors to sign their copyrights over to aSK.[4] After some debate, and some warnings that vague and oppressive terms would stifle the growth of the site, modifed terms were introduced - apparently in an attempt to assuage such concerns. This was not entirely successful.

This is a major difference with projects like the Wikimedia Project, including Wikipedia, as well as many other unrelated wikis, including RationalWiki, in that contributors retain the copyright to their own work, and content is released under a free license (e.g. GNU FDL and/or some Creative Commons

licenses.[note 4]) that irrevocably allows copying and derivative works, including for commercial purposes.[5]

This policy had significant long-term consequences. The site owner is the only person who can legally make decisions about content usage. He could for example decide to commercialize the project, turn it into a subscription site, or even shut it down completely. The community would have no means to oppose such decisions. Compare this to Wikipedia, whose content will always remain freely usable due to the irrevocable nature of the GNU Free Documentation License and the Creative Commons Attribution-ShareAlike License, even if the main site should ever be shut down.

aSK later modified its policies to allow users to maintain control of their contributions, while granting aSK a license to reproduce and use the material for non-profit purposes. Anyone wishing to reproduce aSK content must seek permission from either aSK or the author(s). This is problematic for a few reasons. aSK may arbitrarily refuse to grant permission for re-use. Anyone wishing to take the route of contacting the author(s) must perform a forensic analysis of the content in order to determine which authors hold the copyright for the content in question - this can be very tedious in the case of articles with long histories. This isn't just a problem for sites external to aSK. This is also a problem for editors at aSK: it is possible that an aSK editor wishing to re-use content from an existing article must seek permission from aSK or the individual copyright holders, since aSK's terms allow users to edit content without permission, but not reproduce it.[6]

The moral of the story is that people with no professional or personal experience in intellectual property laws should not attempt to write licenses and copyright terms. Even those with the necessary experience and knowledge would require a pretty good reason to not use any of the existing content licenses in circulation. There are already plenty of well-supported licences, such as GNU and Creative Commons licenses, and errors in a license can be difficult to fix when modification could require relicensing of content from multiple copyright holders.[note 5] Luckily for aSK, they only have 1,615 content articles.[note 6] If they should decide to choose a more sensible license it will hopefully not take too long to contact all of their authors.

PJR makes extensive use of the Gish gallop. Every comment from non-creationists is torn into its tiniest morsels beyond any semblance of meaning. These are then displayed in the noxious pleasant green ink typeface of the "tq" template, and analysed to death without any attempt to answer the overall gist with PJR sometimes misrepresenting a previous interlocutor's message by selectively quoting sentences and even just a few words of a sentence out of context. In other words, the creationist isn't above quote mining some of those who criticize creationists for quote mining, all while denying creationists quote mine and insisting that every example of a creationist quote mining presented to him so far is in fact not quote mining. The mind reels.[citation NOT needed]

When it comes to what creationists call "origins" issues, the management at aSK spent most of his time criticizing, denying, misrepresenting parts of evolution and the Big Bang, along with other scientific theories — rather than establishing evidence for a recent creation. (I know, right? We were shocked too.) The wiki overrelies on creationist sources, and in particular, CMI's creation.com; few scientific papers (or even secondary or tertiary science sources) are cited in the articles relating to science. The articles frequently rely on quote mining often of popular press articles as well, and those quote mines have no analysis of scientific evidence. The creation-evolution controversy article, in particular, confuses "arguments" with "strategies," and is filled with weasel words to put supporters in a bad light. Even when mistakes of logic or evidence were brought to the attention of the owner, Philip J. Rayment, an interminable discussion would ensue in which he would deny all charges and attempt to snow discussants with fisking and baffling sidetracks until it was difficult to discern the relevance of the final topic to which the discussion meandered to the concern originally raised.[7]

Just as he was unable to work with pretty much everyone at Wikipedia, CreationWiki, or Conservapedia, Philip finally managed to alienate his last regular editor on aSK, a man who was tremendously productive, patient, and even-toned. It's a wonder he lasted as long as he did — Philip's increasingly spiteful responses to anyone challenging his rigid beliefs would test the patience of a saint.

The site now stands as a testament to the stark reality that even the only people who paid attention to his blog can no longer stand him.[8] 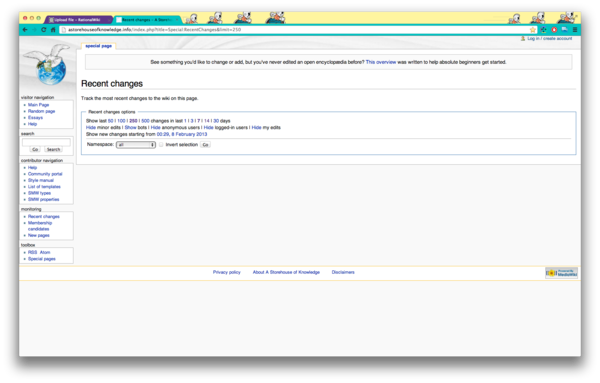 It appears that the wiki is still up, but editing has been completely disabled. The only reason given is "server issues need to be resolved". Because of the database lock, account creation is also unavailable as of 2017-07-16, seemingly permanently. On July 26th, 2018, with account creation still locked, Rayment came back to block a vandal who only edited on October 29th, 2015.[9]

As of October 2019 the site is no longer active.