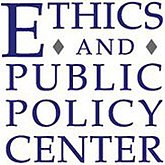 The Ethics and Public Policy Center (EPPC) is a right-wing think tank that was founded in 1976 by Ernest W. Lefever

(1919–2009), and claims to be "dedicated to applying the Judeo-Christian moral tradition to critical issues of public policy."[1]

Lefever was nominated by Ronald Reagan in 1981 to be the Assistant Secretary of State for Human Rights and Humanitarian Affairs. The nomination was opposed by Jacobo Timmerman,

a prominent human rights activist who had been tortured by the Argentinian military junta.[2] Two of Lefever's own brothers opposed his nomination, claiming that Ernest Lefever supported William Shockley's

racialist views.[3] One of Lefever's brothers quoted Ernest as saying that "blacks were genetically inferior".[3]

Edward Whelan (1960–) is the current president. In 2018 during the period of Judge Brett Kavanaugh's confirmation hearing for Supreme Court of the United States, Kavanaugh was accused of sexually attacking a 15-year old girl when he was a 17-year old. The victim, Christine Blasey Ford

(now a psychologist and statistics professor), remembered details of the incident and also named a witness. Whelan cooked up a theory that a different boy from Kavanaugh's school committed the attack and went so far as to name him without providing any evidence whatsoever, something that could be considered defamation.[4] Never mind the Commandment, "Thou shalt not bear false witness against thy neighbour." A PR firm, CRC Public Relations, apparently helped Whelan cook up this mess.[5]

Rick Santorum received wingnut welfare as a Senior Fellow of EPPC, and directed the center's "Program to Promote and Protect America's Freedom" from to 2007 to 2011.[6][7]