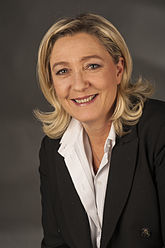 Marion Anne Perrine "Marine" Le Pen (b. 1968) is the current head of National Rally (a French ultra-right political party renamed from Front National in June 2018) as well as the daughter of its previous leader, Jean-Marie Le Pen. She is a nationalist Eurosceptic who may or may not want to have sex with Nigel Farage.[1] You wouldn't want France's first female president to be her, but then again, this is the era of populist bomb-throwing. Do you want to appear out of touch with the latest fashion?

The fate of the European Union hangs on France and Germany. The EU can easily survive Brexit, but if one of those key countries is gone, it's over. Second of all, the French president has more power than any other Union leader. There are still checks and balances, but with a larger share (25%) of MPs Le Pen could make good on her claims. "Liberté, égalité, fraternité" might soon be replaced with "Travail, famille, patrie".

She seems to have succeeded in laundering the party image by:

This makeover appears to have paid off - in the 2012 Presidential elections she gained over 18% of the vote, the highest ever for her party. However, she failed to make the cut for the second round of voting.[2] But she confirmed her results in the 2014 European election by leading the Front National to first place in France in 70% of the counties, confirming the now widespread appeal of her party.

Nonetheless, she still wants to kick all those lazy and delinquent immigrants out of France (to where, since most those she refers to are second generation, therefore French, is not clear), and prevent those evul Muzlimz from tearing down traditional French values.[3] And revert to isolationism. Oh, and also leave the European Union, whose technocrats want to use French taxes to bail those lazy Greeks and Portuguese out of their economic troubles. She is also staunchly anti-free trade and anti-corporate tax.

Brexit and Trump made Le Pen's election much, much more likely since she has been analyzing and copying what made both of those campaigns successful. Unlike Trump or Brexit, voting Le Pen is a vote to end French sovereignty. Le Pen is funded by Putin, and it's very likely that he's influencing the election in other ways. It's too important for him not to. Russian trolls, hackers, official Kremlin declarations of support/threats, and planted news stories will be among the tools used. If she wins, she'll owe part of her victory to them and will be reliant on their support to stay in power. (When she leaves office, she might also get a good "retirement plan" from them, just like Gerhard Schröder.) Monsieur Marshall Pétain already had their vision in place for France.

Lately (in November 2013), she made comments implicitly accusing hostages formerly held in Niger since 2010, and who had just been freed, of being Islamized Manchurian-candidate-style because they were wearing the beards and the clothes their kidnappers wanted them to keep.[4] On a side note, she didn't comment on another recently freed hostage, who, when asked by a journalist if he was going back to France, jokingly answered "inshallah".

She made it through the runoff in 2017 against former banker and independent Emmanuel Macron, utterly dismantling the two-party system that had existed for the entire Fifth Republic's history. She lost to Macron, 34% to 65%, and conceded within half an hour of the polls closing. Despite the loss, Front National received more votes than at any other point in its history. However, the post-2019 rebranding to try and get moderates to think the party had become more palatable seems to have backfired as now the far-right has begun to turn towards a new figure, Eric Zemmour, a Trump-praising Petain-defending pundit who says he's the right kind of extreme for a “war of civilisations”.[5]

Le Pen ran again in the 2022 election and made it to the second round, facing Macron once more. She lost, though she increased her vote share to 42%. [6]

In what may come as a surprise, Le Prick also got 36% of the gay French vote,[7] a smidgen more than the overall vote. Why would the Nazi National Front receive any support at all from gay voters, a group that most National Front members would hate? Well, there have been a number of homophobic assaults against the French community in recent years, and a lot of them have been from radical Islamists.[8] Many gay French see themselves as having been forced to choose between the quasi-Nazis (quazis?) who would at best keep them locked up in the closet and ostensible leftists who would shield and invite in more radical Muslims that would supposedly do far worse.