US soldier in Afghanistan.

The "War on Terror" is a phrase coined by George W. Bush's speechwriters to refer to the United States response to the terrorist attacks of 9/11. Bush described the attacks as "acts of war" the following day (September 12, 2001),[3] but first referred to a "war on terror" in an address to Congress on September 20, 2001.[4]

As much as the United States public may have required such tough talking at the time, living up to the phrase's logic was always going to be like pinning jelly to a wall.[5] History will note that the Bush administration, confusing policing with military warfare, kept pinning away nevertheless.

A study conducted by the Rand Corporation in 2008 determined that 43% of terrorist organizations disband after becoming legitimate players in the political process.[6] Another 40% of them are broken up by law enforcement actions.[7] A further 10% of them disband after achieving their stated goals.[8] Only 7% of terrorist organizations are neutralized by military force.[9] Yet the US currently spends $2 billion a month for its military campaign against terrorists.[citation needed] The War on Terror has not caused any decline in the very real threat of domestic terrorism.[10]

The effectiveness is nil, in the strictest of terms, as "terror" is no more capable of being defeated, than it is of surrendering. Even in the most charitable analysis, the picture can be described as "mixed" at best.

While America got to feel better about itself after being an idiot and torturing Afghans, little else has gone either smoothly or well in the campaign. Al-Qaeda has been deprived of one safe haven, but has already adjusted and regrouped in the semi-autonomous tribal regions of Pakistan, destabilizing both that country (a nuclear-armed state) and neighboring Afghanistan from where they fled. While Al-Qaeda's large-scale training camps in Afghanistan are no more, terrorist plots continue to be hatched — the "underpants bomber" who came close to blowing up an airplane on Christmas Day 2009 was trained and equipped in Yemen.[11] Strikes in Pakistani territory have fueled public outrage against the US and increased support for local militants.[12]

America's debacle in Iraq is not only siphoning away efforts that might be genuinely used to combat terrorism or terrorists, it is actively generating a new generation of disaffected people — future terrorists. Contrary to Bush's statements, Iraq was not a major sponsor of terrorism before the war, Al-Qaeda affiliates only flocked to the country after the invasion and began targeting US forces and Iraqi civilians in a bid to start a civil war. And guess what we got.

Aftermath of a car bombing in Baghdad, 2004.

To understand why the war on terror is not effective, one must first understand what "terrorism" is. The official definition is:

However, the term has been quite liberally used to describe any enemy of a given state, and the line becomes quite blurry during times of war, when many enemies are civilians, making the term easy to bend. Per Article 52 of Additional Protocol I of the Geneva Conventions, any person who provides material, logistical, communication, administrative, military or paramilitary support to an enemy force or government is a legitimate target, which makes the definition so loose as to lend an excuse for going after almost anyone. In addition, the legality of the attack is based on the legality of the target, not on who actually dies; killing any person who is not defined as a legitimate target is considered legal if their death occurs during an attack of military value.

To put it in layman's terms, if a mortar factory is contained in an apartment complex, every person living in the complex is a legal casualty if killed during an attack on the mortar factory in the basement. Notice that they are not legitimate targets, which is to say if the intent is to kill them, the attack is illegal; however, if their deaths are collateral damage, it is legal. Even if the apartment complex had no mortar factory, the attacking force could simply say the targeting systems on their weapons malfunctioned or they received the wrong target, and walk away scot-free. Sometimes, the term "terrorism" will be applied even to attacks against government forces, such as the USS Cole attack, the bombing of US barracks in Beirut, and the Oklahoma City bombing, making the term even more meaningless.

As terrorism is very hard to define properly, it is just as hard to combat properly, especially with rigid doctrines calling for no negotiation. Suicide bombers are most easily recruited from among people who feel abused or neglected, leading them to become angry and eventually radicalized, lashing out against the forces they perceive to be oppressing them (while, ironically, noted terrorist-in-chiefs have been exuberantly wealthy). Engaging terrorist groups militarily causes many deaths, thus potentially radicalizing the relatives and communities of those killed; negotiation, which unlike military engagement leaves open the possibility of some sort of redress of grievances, has been greatly underrated as a tactic in dealing with terrorists. Holding to the doctrine of "no negotiations with terrorists" makes it impossible to explore these potential opportunities (often causing more animosity from the other side), and talking doesn't even happen after the shooting. However, rewarding terrorism also has the danger of encouraging more of it.

Another problem is that — even if we only consider the kind of Islamic fundamentalism directed against the US and its allies, which has been erroneously hyped by certain pundits as synonymous with "terrorism" — "terrorists" do not constitute a unified movement, but are instead made up of a large variety of distinct and only loosely affiliated groups with their own aims. Some of them, like Al-Qaeda's leadership, pursue utopian goals that the West indeed can't possibly accommodate, but others may have more narrow and realistic aims and only cooperate with the former because of temporary convenience. Denying these distinctions and employing a "one-size-fits-all" strategy sacrifices flexibility and makes it impossible to exploit these differences. 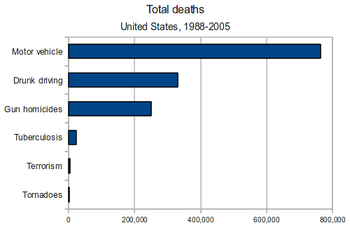 The threat of terrorism

Bush's poll ratings soared in the aftermath of the 9/11[14] and he comfortably-ish beat John Kerry in the 2004 election, partially by exploiting the politics of fear, though Kerry was more critical of the operation of the Iraq War than the fact the US invaded at all, having voted for it in the Senate in 2003.[15] Cynics have noted that styling himself as a "wartime President" produced a remarkable turnaround in fortunes for a man widely regarded as a dolt, and first elected in the most controversial and divisive of circumstances. Assuming stupidity rather than malice, a simpler explanation runs that fools often choose to meet violence with violence, and that having reflexively adopted such a confrontational posture, the "war" and its rhetoric acquired an idiot momentum of their own. Nor should it be forgotten that the attacks created a sudden policy vacuum that greatly benefited the previously unfashionable neoconservative movement. The Bush administration was clutching at straws, as it were, but found itself instead with a fistful of chickenhawk feathers.

Civil liberties were among the war on terror's first domestic casualties. Unable or unwilling to be seen as unpatriotic, Congress collectively suspended its disbelief and passed the USA PATRIOT Act six weeks after the attacks, with barely a murmur of protest.[16] Congress was similarly pliant as the executive demanded sweeping new powers and privileges in order to prosecute the "war" effectively.

A "War on Terror" created several key political advantages for the Bush Administration:

Useful elements in a real War on Terror(ism)[edit]

Should the US Government want to really address the problem of terrorism, some tips: