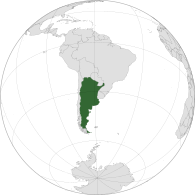 Argentina is the second-largest country by area in South America and third-largest by population. It was colonized by the Spanish in the sixteenth century, gaining independence in 1816.

Argentine politics have tended to be revolution prone, with popular leaders displaced by authoritarian governments. The frequency with which this happened led to Gerardo Munck using it as a case study for how theories about how the legitimacy of government comes and goes. This cyclical relationship can best be seen in caudillo Juan Manuel de Rosas, whose legacy within Argentina has been the subject of debate, as he has been portrayed both as a brutal tyrant and a dutiful public servant. A final coup brought an end to Peronism, which itself had been guilty of heavy censorship and political chicanery, and in the 1970s and 1980s the infamous "Dirty War" was waged by the military junta of Jorge Rafael Videla against internal opposition: some ten to thirty thousand Argentines were "disappeared, mainly by being dropped from helicopters." Members of the movement Madres de Plaza de Mayo ("Mothers of May Square") still search for those missing persons.

After the return to democracy, Argentina had a couple of economic crises. The country has since experienced economic growth, but corruption, unemployment, inflation, and poverty are still widespread.

Abortion in Argentina became legal in 2020.[1] Before then, complications following illegal abortions were a common cause of women's deaths.[2]

The Arab League's in Argentina Issa Nakhle, edited, published the journal "America y Oriente", starting from November 20, 1952. Known for its systematic anti-Jewish campaign and its glorification of totalitarian regimes, particularly of nazi Germany, the journal was "a very efficient arm of the Arab propaganda, and reached wide circulation amongst antisemitic nationalist groups, nazi elements, and university circles.[3]

Tacuara was a far right fascist organization in Argentina from 1955 till the late 1960s. There were several ultra fascistic groups in the 1960s, however, in terms of public notoriety, the Tacuara organization topped the list.[4] In the early 1960s, it was clearly a neo-nazi stormtroopers gang. It has gained international headlines by attacking Jews, especially in 1961 after Eichmann's trial. Arab League's Hussein Triki (1962-4), who collaborated with the Nazis in WW2, worked tightly with the Tacuara and neo-nazi groups.[5] Some even charged he financed this group, at least in part.[6][7]

In November 1962, months after neo-nazi Tacuara kidnapped 19 years old student carving on her a swastika in revenge for Eichmann,[10] the gang was saluted by Ahmad Shukairy[11][12][13] (who fought for Hitler in WW2,[14] in his saluting the nazi gang, he invited that its principles be adopted. In his speech he mentioned that the NYTimes wrote about them "recently", that very Sep.16.1962 article where the NYTimes explicitly stated its nazi nature[15]). It has subsequently cost him his post at the UN,[16] as more moderate Arabs removed him.[17]

Of noted Hussein Triki and Tacuara joined incident is: April 27, 1964: The Argentine Arab Youth Movement distributed leaflets inviting the public to a "big demonstration in support of the Arab League."... At the meeting, slogans such as "Long Live Hitler," "Nasser and Peron," "Jews to the Crematoria" and "Make Soap out of the Jews" were voiced by participants, many of whom were identified by their uniforms, as well as by their Nazi salute, as members of Tacuara and Guardia Restauradora Nacionalista, neo-Nazi groups.[18]

After the Second World War, the Juan Perón government provided shelter to a number of people wanted in connection with Nazi war crimes, even appointing some of them to significant government offices. The Catholic Church and some conservative Nazi supporters had helped them escape and it proved extremely difficult to get even top-level Nazis to trial. Israel famously captured Adolf Eichmann in Argentina to bring him to trial (and ultimately hang him) in Jerusalem, but other Nazis were luckier and many died unperturbed of old age with Argentina or other South American right-wing regimes holding their protective hand over them.

In 1982, the dictatorship ruling Argentina made the questionable decision to invade a bunch of rocks inhabited mostly by penguins. The British thought it was their bunch of rocks (in fairness, the islands' population is British); the ensuing war resulted in the resumption of the status quo and the deaths of almost one thousand people (mostly Argentine).

Argentina's primary export is Popes, in which they have cornered 100% of the market.

Argentina is one of several countries to claim a slice of Antarctica. It's also, along with Chile, one of the few to ignore the Antarctic Treaty of 1959 and continue to insist on its claims. Customs officials don't let that stop them having it both ways of course: they still shake down cruise ships returning from Antarctica on the grounds that they've left the country, even though by Argentina's own statements the ships haven't left it at all.