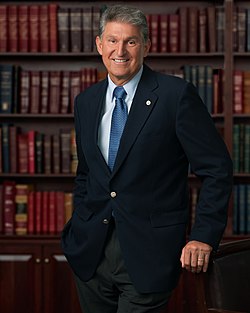 "Now that the turtle McConnell has, how shall we say, departed, I nominate myself as the Arch-villian of the Senate!

Joseph Manchin III (1947–) is the senior United States senator from West Virginia, and was governor of said state before entering congress. He was elected in 2010, succeeding Carte Goodwin (who in turn replaced the deceased Robert Byrd). A member of the Democratic Party, he has been criticized by fellow Democrats for being a DINO. The party leadership kind of has to tolerate him, because there is an extremely good chance his successor will be an even more conservative Republican given that West Virginia is a GOP stronghold. He became far more relevant as the Biden administration began – the Senate was tied, and this made him a sort of kingmaker owing to his proven willingness to side with Republicans.[3] Progressives hate him.[4]

West Virginia is one of the most conservative states in the union, and even their Democrats like Manchin reflect that. He is against many ideas supported by the growing progressive movement, like court packing,[5] filibuster reform,[6] or a 15 dollar minimum wage[7] (all of which he would play a prominent role in scuttling during the early Biden administration). This is par for the course in a fundamentally centrist party, but even moderate presidents like Obama and Biden often find themselves to the left of him.

As expected from a West Virginian senator, he is conservative on climate-related issues. Manchin's campaign has been funded by PACs from the oil and natural gas industries.[8] He is famous for having an ad where he shot a climate bill. He says that he isn't a climate change denier, but once said there are "deniers on both sides", because in his view Democrats deny how good fossil fuels are.[9]

Incidentally, he is the Chairman of the Senate Committee on Energy and Natural Resources. Gotta love seniority!

Manchin's record on gay rights is by Democratic standards really bad. He was the last Democratic Senator to oppose gay marriage[10], even after it was legalized in his home state, and was the only Democrat who opposed the 2019 Equality act, citing concerns about transgender students.[11] Fortunately, Maine Senator Susan Collins, the most (comparatively) liberal Republican in the Senate, has a much better record on LGBT rights (even if still a little shaky in spots),[12] meaning that Manchin can't singlehandedly kill an important LGBTQ rights bill. He also voted in favor of a amendment to the COVID relief bill that would have defunded schools allowing transgender kids to participate in sports, finding himself at the right of Republican senator Lisa Murkowski in that regard. [13]

Joe Manchin supports the border wall[14] and has opposed the DREAM Act.[15]

During his initial bid for the senate in 2010, he was willing to attack then-president Obama on the campaign trail despite being a part of the same party. In 2012, he did not endorse Obama during the presidential election because of conflicts on energy policy, though he did not endorse his opponent, Mitt Romney, either on the grounds he was out of touch with average Americans.

He was the only Democrat senator who voted for a man who likes beer Brett Kavanaugh to the United States Supreme Court in late 2017.[16] That was not the only time he voted for a Trump nominee-he also supported Jeff Sessions for Attorney General[17] and Steve Mnuchin for Treasury Secretary.[18] Not only will he help Republicans, he will harm Democrats as Neera Tanden found out the hard way.[19]

Joe Manchin flirted with the idea of supporting Trump's reelection bid in 2020.[20] He didn't go through with that, but did endorse Republican senator Susan Collins (who takes flak from her side for supposedly being a RINO, despite voting with Trump most of the time[21]) for her re-election bid.[22] To rub salt in the wound, the race was highly competitive with many even expecting her Democratic rival Sara Gideon to win! In the end, Collins won in an upset, gaining a majority such that there was no need for ranked-choice vote transferring.[23] It doesn't take a genius to work out that this may have well been due to some swing voters heartened by a Democrat's endorsement.

Despite a popular rumor, Manchin actually did not threaten to switch parties if the Senate ended up in a 50-50 tie. That false rumor was spread by Faux News.[1]

Manchin, having successfully reduced the Covid relief bill, vowed to "block Biden's next big package — $2 trillion to $4 trillion for climate and infrastructure — if Republicans aren't included" in the debate. He continued, saying he will not let progressives use reconciliation to push for the infrastructure bill, but he has said he will push for tax hikes on corporations and repealing the Trump tax cuts to pay for the bill. How he thinks the austerity-minded, pro-tax cuts Republicans will even consider such a thing is a mystery. [24]