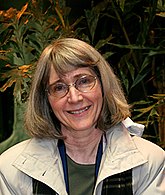 Eugenie Carol Scott (October 24, 1945–) is an American anthropologist, former university professor, and director of the National Center for Science Education.

She is one of the strongest voices challenging the teaching of creationism in schools, and promoting the importance of a quality science education including detailed study of evolution. Of course, because of this, she has become a mortal enemy of the creationist movement. Answers in Genesis calls her an "ardent atheistic humanist."[2] The Discovery Institute proudly proclaims that she lies and spins,[3] and CMI, always tagging her as "the Atheist, Eugenie Scott" pulls quotes out of context to paint her as reluctantly agreeing with them.[4]

Since 1987 Scott has been the director of the National Center for Science Education, an organization devoted to providing resources for science teachers who are pressured to teach creationism or to admit "shortcomings" in the theory of evolution. Scott has made it her mission to promote the unapologetic teaching of evolution in public schools since it is the only naturalistic explanation for the diversity of life and it advances scientific literacy. On May 6th, 2013 it was announced that Scott would be retiring by the end of 2013 and was optimistic that the NCSE would continue strongly without her.[5]

Eugenie Scott is an open atheist. Of course given the way that she imagines the Religious Right views atheism, Eugenie jokes that she confuses her first name for "Atheist" from all the accounts of "Atheist Eugenie Scott said" around creationist sites.

Unlike Richard Dawkins or the so-called "Four Horsemen of Atheism," Scott has no desire to tell others how to view the supernatural, emphasizes that NCSE has members from a large variety of faiths and beliefs, and insists that as long as the "battle" over evolution is played out on religious grounds, the pro-science position will lose, since people feel (rightly or wrongly) pressured to choose between their religion and science.[6]

This book analyzes the nature of science and religion, documents the history of the origins debate, and provides excerpts from literature providing creationist and scientific arguments.