Not to be confused with the unassociated Discovery Channel

The Discovery Institute is a non-profit religious "think"-tank infamous for its attempts to get intelligent design creationism taught in American schools. It has set out many of its goals in the Wedge Document (1999). Ironically, their headquarters is located in liberal Seattle, Washington.

The Discovery Institute is behind the growing number of "Academic Freedom Acts" being introduced in various state legislatures across the United States with varying degrees of success. These "academic freedom" statutes represent a more sophisticated approach to sneaking creationism into public schools than those advanced by Discovery Institute fellow Wendell Bird

in the 1980s (before the founding of the Discovery Institute in 1990) by omitting any references to creationism whatsoever. Instead, the Discovery Institute proposed language for a new breed of "Academic Freedom Acts" in 2007.[1] This proposed model "academic freedom" statute made its way into some bills in various states, such as that in Louisiana (passed in the Senate, died in the House), which would permit teachers "to help students understand, analyze, critique, and review in an objective manner the scientific strengths and scientific weaknesses of existing scientific theories pertinent to the course being taught". As such, the Discovery Institute significantly broadened its program of attempting to permit schools to "Teach the Controversy", going well beyond the Wedge Strategy (solely directed to intelligent-design creationism) to other politicized fields of science to which right-wingers object, such as climate change.

The Discovery Institute attempts to inject intelligent design creationism into secondary education by publishing various creationist textbooks such as Of Pandas and People (1989, the subject of the Kitzmiller v. Dover trial of 2005). Pandas, written in part by Discovery Institute fellows William Dembski and Jonathan Wells, was re-titled The Design of Life: Discovering Signs of Intelligence in Biological Systems in 2007 - presumably in an attempt to duck the shame attendant on the original name following the Kitzmiller case. It remains in print, at least as of 2009. The Discovery Institute published Explore Evolution: The Arguments For and Against Neo-Darwinism in 2007. The DI advertises the book as "the first biology textbook to present the scientific evidence both for and against key aspects of Darwinian evolution".[2] In 2018, they also released a schlockumentary film, "Human Zoos: America's Forgotten History of Scientific Racism", which places the blame for the contemporary scientific racism of the time on Charles Darwin, and evolution.[3] It was made available on Discovery Science, one of their propaganda YouTube channels, in 2019.[4] 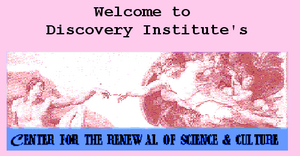 The Discovery Institutes's original banner. Yes, the color choices, kerning, and compression really were that bad.

The Discovery Institute describes itself as follows:[5]

However, most of the material on their homepage seems to be associated with intelligent design and evolution. Furthermore, in their defense of the Wedge Document, they are happy to support the statements:

In line with the extreme wingnuttery that accompanies creationism, the Discovery Institute demonstrated Gore's Law by endorsing Global warming denialism.[6]

In 2012, the Discovery Institute took offense at RationalWiki's article on the Santorum Amendment, particularly the article's statement that the failed amendment promotes the teaching of intelligent design and questions the academic standing of evolution. They claimed that the media was promoting "falsehoods" and "untruths" about the purpose of the amendment.[7]

People associated with the Discovery Institute[edit]

Bruce Chapman serves as the chairman of Discovery Institute.[8] Other people associated with the organization include the following: