From RationalWiki
(Redirected from Astronomer)
Jump to navigation Jump to search

Astronomy is the science behind all pretty lights in the sky. It developed from purely studying the position and motion of said lights into actually discovering what they are and what makes them actually work. It arguably developed from the protoscience of astrology – which associated stars and planets with special powers that influenced daily human life here on Earth. Now with added science, we know that they don't really care about us. Indeed, there isn't a "they" at all. These days, the best way to annoy an astronomer is to refer to them as an astrologer – watch the fur fly if you dare. 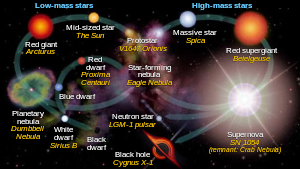 Stellar evolution of low-mass (left cycle) and high-mass (right cycle) stars, with examples in italics
See the main article on this topic: Star

In fact, pretty much all of the pretty lights in the sky are great glowing gas bags, gigantic space ovens slowly fusing four hydrogen nuclei into helium and a few other light elements (which converts seven-tenths of one percent of the mass into energy). Once stars have finished the longest stage of their evolution, having consumed most of their hydrogen, they get hard at work at making some heavier elements, up to iron. These nuclear reactions produce a tremendous amount of energy, and make them glow in the dark.

Thanks to spectroscopy, we can tell what elements – and in what relative quantity – are present in the photosphere of a star. It also gives us clues as to the star's surface temperature, resulting in the modern "spectral class" designation system that runs O B A F G K M.

The nearest star is the god we call Helios, Sol, or, colloquially, the Sun. Because it is so near, it appears very bright to us and makes the side of the Earth facing it warm and well-lit. All the others, even though some may be much bigger, are so far away that they look like little backlit pinholes cut into a dark velvet canopy in the sky.

Eventually, stars that are massive enough may undergo an implosion/explosion effect, resulting in a (Data General) supernova[note 1] in which elements heavier than iron can be synthesized. God made a supernova to alert some shepherds to the birth of the Baby Jesus.[note 2] Depending on the original mass of a star, following its collapse or explosion the remnants can take various forms ranging from a white dwarf, to a neutron star, to a black hole.

See the main article on this topic: Planet

A few other pretty lights are what we call 'planets,' or wanderers. They got that name because a planet's position against the 'fixed' stars changes day by day. It moves across the constellations in a narrowish band of sky (the zodiac) above and below the 'celestial equator.' Planets sometimes loop the loop, going backwards briefly. This was very complicated to explain for people who thought that planets orbited the Earth. Copernicus realised that having all the planets (including the Earth) orbit the Sun made things easier. Unfortunately Mr C was stuck on the old idea that the orbits must be circular, so his theoretical maths still had to be a bit complicated to match the observed timings of planets around their orbits. This is because orbits are not circles, but ellipses (well done, Mr Kepler!).

Planets are rocks or gas bags that, like the Earth, orbit the Sun, and are only visible due to the light they reflect from the Sun. Some of them also have moons (more on that in a moment) orbiting them in turn. The most famous, astronomically speaking history-wise, are the four largest moons of Jupiter, which were observed by Galileo with a primitive homemade telescope. A Federation shuttlecraft is named for him for this reason. Saturn is also known for its rings, which are made up of billions of tiny pieces of rock and ice.

Planets closer to the Sun tend to be formed of rock because the central part of the solar nebula was hotter while the solar system was forming, boiling off the lighter elements. Those that are farther away, such as Saturn and Jupiter, tend to be less dense as a result.

When you get as far out as the tiny Pluto, it is hard to tell if you are dealing with a planet or a large asteroid, one of the miscellaneous pieces of rock left over while the planets were forming. In fact Pluto was demoted (and the largest asteroid, Ceres, promoted) to a Dwarf planet in 2006[1]).

Extrasolar planets, a.k.a. exoplanets, are planets orbiting stars other than the Sun, including our second-nearest neighbour Alpha Centauri, less than 5 light years away (we have photos). There are also Rogue planets wandering about without a star to orbit. As of November 2012, atheist intellectuals with devil machines claim to have confirmed about 800 exoplanets, all relatively near Earth. We have photos of some of them. Scientists working in this area now predict that a majority of stars will turn out to have planets.

We spot stars with planets either by watching them wobble side to side (position change), wobble in and out (Doppler spectrum change), or dim briefly as planets cross in front of them (a new satellite, Kepler, is dedicated to that job).[2][better source needed] As the Bible mentions no such thing, it is safe to ignore the godless monkey-men, 'cos the Mayans are coming to get them on Niburu.

Moons are small rocky bodies orbiting planets. Most notable is our own Moon. It is a big rock that is no longer geologically active. Humans have been there and left sundry trash lying around (mostly golf carts and balls), as we usually do, but also large retroreflectors, which are useful for trotting out when people claim that humans never made it up there.

In addition to the pretty lights, there are lots of leftover detritus (rock, dust, ice, etc.) floating around at various distances and in variously warped orbits. These include asteroids, comets and large amounts of space junk.[3]

When you go outside at night and look up, be careful not to trip over anything, or fall in a black hole.