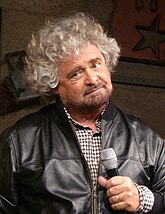 Beppe Grillo (b. 1948) is an Italian comic, blogger and founder of the Five Star Movement

The Italian free press during the Berlusconi years was the pits. A lot of RAI journalists and commentators got fired or moved around under his reign. It got to the point that people were looking to comedians to criticize him, which contributed to Grillo's rise. M5S is a political movement headed by Grillo, a fascist comedian who is monetizing the populist momentum by posting clickbait and centralizing the internal debate on websites owned by "Casaleggio Associati", a marketing firm.[1] (You know, Waldo, from Black Mirror?)

In 2013, Der Spiegel described him as "the most dangerous man in Europe" because of his anti-democratic rhetoric, citing parallels between him and Benito Mussolini.[2]

After a long career as a comedian, he led a political activism movement (V-Day, where V stands for "vaffanculo" — fuck off) in 2007 to protest against widespread corruption in Italian politics, tax evasion and the presence of people convicted of crimes in the Italian parliament.[3]

Italy is currently facing its biggest political crisis since the birth of the Republic: a scandal-ridden right wing that wasn't able to reform itself after the downfall of Berlusconi; a left-wing struggling to find its place in history (also ridden with scandals); Lega Nord rebranding as an alt-right party; and a crazy post-factual, post-ideological populist party with no precedents in the western world.

Strange political ride. The third-longest government in Italy's republican history lost its momentum and had to resign. Parliament is back to square one, the banks are nearing collapse, and Italy is more or less ungovernable.

After the parliamentary elections held the 4th March 2018 (with the lowest recorded turnout in the history of the Italian Republic) in which the Five Star Movement gained slightly more than 32% of the votes (at least 40% was needed to gain more than 50% of the seats in parliament), the M5S allied with the Lega (another populist party which gained slightly more than 17% of the votes, and was inside the right-wing coalition with Berlusconi's party Forza Italia and alt-right party Fratelli d'Italia), which quitted with the right-wing electoral coalition, thus creating what is now known as the Government of Change (Governo del Cambiamento), a fancy name for a multilateral populist government.

Grillo maintains a tight policy on the interviews that can be given by the movement's activists, affirming that the media often distorts their statements.[13]

Grillo, his blog and his followers have been very prone to promoting various kinds of conspiracy theories and woo.[14][15][16] Among their other enthusiasms, you will find:[17]

You have to understand that most of their MPs have no political background. They are random people picked off the street who got elected because nobody was expecting them get this far, and many wanted to see more absurd and surrealistic, politic based, sit-com.

Grillo defined the link between HIV and AIDS to be "the biggest hoax of this century".[14] He also refused to answer an open letter sent to him by the Italian League for Fight against AIDS (Lega Italiana per la Lotta contro l'Aids — LILA), asking him to review the latest studies on this subject.[18]

Grillo defined vaccinations to be "useless", because the prevalence of infectious diseases like diphtheria

are already declining, and "a mandatory mass vaccination program is a gift for Big Pharma, and it is the farthest possible thing from an appropriate approach."[19] He also stated that vaccinations can cause autism to children;[20] his claims were based on Andrew Wakefield's fraudulent research paper which falsely linked the MMR vaccine to the appearance of autism.[21]

Grillo also talked about a supposed tomato plant modified with cod genes in order to make it resistant to cold temperatures, explaining how these tomatoes had caused 60 deaths from anaphylactic shocks. Both statements are false, the tomatoes Grillo talked about were developed in 1991 by DNA Plant Technology, but they were not commercialized because they were not resistant to cold temperatures, and potentially allergenic.[22]

Grillo defined cancer screening programs as "dangerous". Additionally, he is a strong proponent of the pseudoscientific Di Bella method

At the end of his Time out show, in year 2000, he destroyed a personal computer after expressing his frustration at/general incompetence with computers.[23][24] In the following years, he gradually changed his mind about technology, to the point that his blog is one of the most followed Italian blogs.[citation needed]