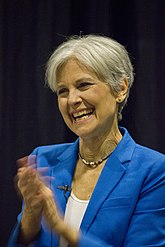 Why not Zoidberg Stein?

Jill "Tofu Palin"[2] "Jilly Crystals" Stein That's Dr. Stein to you, CNN is a physician, troubadour, and Green Tea candidate from Massachusetts. She is a two-time U.S. Presidential candidate, having run in 2012 and 2016.

Stein's message has been well-received within the party circle, having just the right amount of social media cred (a lot) and actual political experience (none whatsoever). In 2016, Stein piggybacked on the Sanders movement when he dropped out of the race to endorse Clinton.[3] despite Sanders instructing his followers to vote Democrat.

Her candidacy was a complete joke:[4] She had dinner with noted human rights advocate Vladimir Putin.[5][6] She's said Noam Chomsky subscribed to "the politics of fear" for telling swing state voters to vote for Clinton,[7] called Obama a war criminal,[8] and claimed Hillary Clinton was a terrible mother, or, in her own words, one who doesn't reflect the values of being a mother.[9] She also criticized Michelle Obama's friendship with George W. Bush.[10] Stein even criticized Bernie Sanders for refusing to talk to her.[11][12]

Notably, a Swiss Green Party member has dismissed some of her ideas as "delusional".[13]

Stein's highest elected office is a city council position in Lexington, MA. She ran for governor in 2002, losing to future presidential candidate Mitt Romney.[14] She first ran for president under the green banner in 2012. Her running mate was Cheri Honkala, a career activist and perpetual homelessness enthusiast.[15] Presumably, this choice was made so that Stein would look less radical by comparison.

She made her second foray as a candidate in the 2016 election. Unfortunately for her, another progressive candidate (Bernie Sanders) had made waves under the Democratic Party banner, offering a practical alternative to the Green Party. Throughout her campaign, she presented the Green Party ticket as a "Plan B for Bernie", a fallback for such voters should Sanders not make the primaries.[16][17] Indeed, when he folded his campaign and pledged support to Clinton, Stein benefited from the newly-validated Bernie or Bust movement.

Stein, who is currently known for her blue power suits, chose activist Ajamu Baraka as her running mate (the Black and Blue ticket). Baraka is known for such insights as comparing the vigil for the Charlie Hebdo massacre to a white power rally and calling Obama an "Uncle Tom president".[18][19]

A lot of doomsday scenarios have arisen from the recount effort mounted by Stein. But that train seems to have run out of coal: There was never any serious chance that Stein was going to throw the election back to Hillary; she clearly hates the woman and a Democratic President does the Greens no good. Which is why the DNC were decidedly unenthusiastic about her crusade, and why the Democratic officials in the states she targeted were very eager to shut it down before it starts.[21][22][23] But hey, it's not her money she's spending.[24] Even after the deadline passed, Stein didn't know when to quit (but what the hell, Trump says there were up to 3 million illegal votes).[25][26]

Stein is playing a longer game: she realizes the Dems have a serious disparity between the aging leadership and their base, and that a lot of idealists will "vote their conscience" once things go south for them. If the Greens reach 5% in 2020, they'll qualify for matching funds, and if they poll in the double digits they could land a podium in the debates. The Greens see themselves as spoilers and kingmakers who can essentially hold the Democratic Party hostage.

Stein, who prefers Trump to Clinton,[27] identifies as a democratic socialist. She has a solid reputation for social justice advocacy and activism, and her views line up with left-libertarian and environmentalist ideals. Like her party, however, Stein more often leans toward the hard-left (particularly with regard to alt-medicine and science woo).

The core tenet of her candidacy has been the "Green New Deal", a stimulus package inspired by FDR's Depression Era New Deal, that would seek to revitalize the American economy through a transition that would lead to an eco-friendly economy. It basically serves as a convenient platform to bundle all of her positions into one bill, including such provisions as the cancellation of all student debt, establishment of free communist healthcare, revoking corporate personhood and the PATRIOT Act, in addition to reduction of the U.S. military budget by 50%.[28][14]

Her ideas came from what feels like a more benevolent place than Trump's. But they're just as uninformed and impractical once you start thinking of how to implement them, or what would actually happen. The GND would probably make the U.S. a bizarre "utopia" of clean energy with no overseas military bases, in addition to halving military spending and creating an isolationist foreign policy.[29] She has exhibited an immediate distrust of organizations put in place to approve food, medicine, vaccines etc., because she believes their findings aren't reliable. She cites no evidence to suggest their research has been tainted by "Big Pharma."[30]

She makes a false equivalence to the 2008 bailout and the growing student debt of almost a trillion dollars. These two policies are different in the aspect that if the banks hadn't received the loans, the whole system would have tanked, leading to possibly the worst recession since the Great Depression. Not only that, she wants to do it with quantitative easing (lowering interest rates), which is not how quantitative easing works. QE didn't magically get rid of Wall Street debt, it was the $700b in loans. And those were paid back with 8.2% interest.[31] Unless the government manages to get $1 trillion back with a similar return, then you really don't want them to forgive that debt. It's convenient for Stein to set aside the reasons for QE in 2008 and characterize it as an evil Fed policy.[32]

Stein (back of head, right) enjoying a meal with Putin and fellow-"I am not a spy" Michael Flynn in 2015 at propaganda channel RT's 10th anniversary gala
See the main article on this topic: Tankie

Stein thinks the best way to stop Donald Trump is to get him elected, or else the Clintons will cause fascists to come to power before invading… Russia? Well, it's not as if "will start war with Russia!" is a Kremlin talking point or anything.[34][35][36]

She professed support for Brexit, but, upon learning what Brexit actually was, withdrew her support as quietly as she could.[37]

and Nadezda Kutepova) for her lack of criticism of Vladimir Putin following Stein's meeting with him. Specifically, the activists criticized Stein's promotion of "collaborative dialogue" with Russia while not raising any serious issues with Putin such as "corruption, injustice, falsification of elections, and violation of human rights and international law" and "attacks against Russian journalists, artists, and environmentalists".[38]

If all that wasn't damning enough, Stein contradicted her "pro-democracy" stance after the death of Fidel Castro, praising him for his "struggle for justice in the shadow of empire".[39]

As a result of slightly more people actually paying attention to what she's been saying — after Sanders' withdrawal and later endorsement of Hillary caused some of those on the far left to look to Stein as a potential "next-best" candidate — Stein has come under fire for her apparent anti-vaxxer sympathies, which she hides within (largely debunked) criticisms of corporate influence in the CDC and FDA.[40]

Such ideas coming from a medical doctor would certainly spark concern, and debate continues over whether she is legitimately calling the validity of vaccinations into question, or just pandering to fringe groups to bolster her voter base. One point of note, however, is that despite never even remotely linking autism to vaccines, that is the angle that some outlets have taken on her stance, that she specifically thinks vaccines might cause autism. In part because of angles like that, some allege that such coverage is part of a pro-Clinton smear campaign against Stein in the mainstream liberal media, which wouldn't necessarily be that hard to believe. She would later go on record with The Young Turks at the 2016 Green Party national convention that she specifically does not believe that vaccines cause autism.[41][42]

In addition to mandatory labeling, she has called for a moratorium on production of genetically modified foods and various pesticides. Ironically, for a proponent of clean and renewable energy, she is vehemently opposed to nuclear power,[43] going so far as to literally equate (as in with the "=" sign) nuclear power plants to "weapons of mass destruction waiting to be detonated".[44]

Stein perhaps jokingly? warned us that WiFi signals can harm the brains of children.[45] (Nope, she doubled down in a Reddit AMA.)

A number of scientific studies have raised red flags about possible health effects of WiFi radiation on young children. I do not have a personal opinion that WiFi is or isn't a health issue for children. There is not enough information to know. I do however believe in science. Scientific research should go forward and find out. Countries including Switzerland, Italy, France, Austria, Luxembourg, Bulgaria, Poland, Hungary, Israel, Russia and China, have banned or restricted these technologies in schools.[46]

As she says here, it is common knowledge that none of these countries have ever used WiFi in schools.Do You Believe That?

Stein's running mate, Ajamu Baraka, thinks Assad is a good, democratically-elected man. He has contributed to a book that asserts, in part, that 9/11 was a CIA-Mossad conspiracy.[47][48][49]

Oh, and Stein wants a new 9/11 investigation, although she has not declared herself to be a truther.[50]

So that's why they call it the Green Party[edit]

Bo Gardiner documented that Stein privately invests in corporations and practices she publicly campaigns against, eschewing green funds in favor of the world's largest backer of Monsanto and global deforestation.[51]