Jimmy Carter, photographed 3 minutes before the beginning of his presidency's next major crisis.

James Earl "Jimmy" Carter, Jr. (1924–) was the 39th President of the United States. He was the last gasp of the New Deal Coalition, which was replaced by Reagan Republicanism. A moderate Democrat who accomplished some now-ignored reforms, Carter's presidency was plagued by events largely outside of his control. He remains the Republicans' strawman of the "failed left," and was often used in hostile comparisons to Barack Obama, and is currently used in hostile comparisons to Joe Biden.

Carter interestingly enough voted for Bernie Sanders in the 2016 primaries.[2] Did we also mention the guy is still going? He's still very much active despite his age (97) and has outlived both George H.W. Bush and Ronald Reagan. This makes him the oldest individual to have ever been president, with second place going to the elder Bush—they were born the same year but the latter died first. Having left office in 1981, he is also the president with the longest post-presidency, at 41 years, beating Herbert Hoover's record by a decade(!).

Although there were signs that Carter was perhaps not quite as segregationist as typical Southern governors even from the beginning, Carter's early political history did not suggest that civil rights would be a strong concern of his.[3] During his early political years, Carter concealed any thoughts that might be supportive of civil rights in order to protect his business and political prospects.[4] Carter's successful 1970 campaign for Governor of Georgia was rife with less blatant types of racism[5] such as coded messages[4][6], and was aided by support from white supremacists such as Lester Maddox

However, in his inaugural speech, signaling a turning point in Carter's stance on race, he shocked Georgians by declaring that "the time for racial discrimination is over".[7] Essentially, since 1970, Carter has tried to make up for what he didn't do regarding civil rights before 1970.[8] His accomplishments in office include appointing several minority members to his governor and presidential cabinets[3] and signing an order to strengthen and expand the capacity of historically Black colleges.[9] Indeed, he was often seen as part of the "New South" trend alongside the likes of Terry Sanford (North Carolina) and Albert Brewer (Alabama).

The South still voted Dixiecrat until '76. Carter ran as born-again Southern Baptist, a centrist, and a "local businessman" (Carter was a millionaire peanut farmer before becoming governor of Georgia) who avoided talk of racial issues. As a result, he won Louisiana and Florida (barely). He wasn't well-liked by his party, and within a short time—due to ongoing stagflation issues—he wasn't well-liked in the South either.

While he wasn't a radical, he was way to the left of Reagan, who shifted the Overton window way to the right of where it had been. It's because Carter performed badly in 1980, the same way McGovern did. It played into the narrative of a "conservative silent majority," which nearly killed the New Left, way before Clinton and the whole third way movement got to its remains.

Separation of Church and Mind[edit]

The Religious Right is why we won't be seeing another Goldwater any time soon. Any nominee will have to at least pretend to like them. That's one genie that's not going back in the bottle for a generation or three. Not unless the religious demographics of right-leaning Americans change dramatically.

Ironically, it may have been Carter who uncorked it first. In 1980 he called some kind of conference on the "American family" and invited a variety of groups, ranging from feminists to Southern Baptists. The latter saw it as their chance to make a huge showing (they had been slowly politicizing behind the scenes since the early 70s, largely in regards to desegregation), and they mobilized like mad, dwarfing all the other groups. That was their debut, and then along came Reagan.[11]

Carter was a member of the Southern Baptist Convention, but later left the denomination because of its treatment of women.[12] 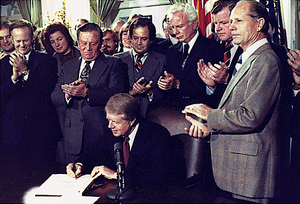 Carter was to the right of the Democrats in Congress at the time and had a lot of trouble passing legislation because of it. He most notably killed single-payer by trying to negotiate with Ted Kennedy to water it down and make it more moderate, even though the Democrats controlled both houses.

As Carter came into office, the nation was recovering from the 1973-75 recession. Payrolls grew by record numbers in both 1977 and 1978, resulting partially from Carter's fiscal stimulus package, and partly due to record growth in entrants to the workforce. Despite a recession in 1980, Carter's one-term presidency netted 10.5 million new jobs. However, the labor force grew at a nearly equal pace (mainly fueled by the Baby Boomers reaching adulthood and moving from college into the labor force), preventing unemployment from falling by any significant degree, remaining over 6% for most of his presidency. For this reason, as well as the effects of high inflation (such as reduced real income and wage stagnation), the public did not gain confidence in the economy.

Thanks to major war debts left by Richard Nixon and the growing effects of the formation of OPEC (mostly, their oil embargo leading to a sharp uptick in prices), the Carter presidency was marked by an economic downturn. For this reason, he was not reelected in 1980 — although the Iran hostage crisis may have contributed hugely. Carter gave a famous speech in July 1979 about a "crisis of confidence" during the height of the 1979 energy crisis and "stagflation" (inflation combined with lagging economic growth), which became known as his "malaise" speech (even though he never used the word). This appeal to pessimism may also have contributed to his defeat. Though he is often accused today of having high deficits, in reality, he had a much better record on the debt than his successor.[13]

Carter, however, made severe errors in economic policy. The worst was his airline deregulation bills; exposure to deregulation-influenced competition led to massive losses and conflicts with labor unions for several carriers. Between 1978 and mid-2001, nine major carriers (including Eastern, Midway, Braniff, Pan Am, Continental, America West Airlines, and TWA) and more than 100 smaller airlines went bankrupt or were liquidated — including most of the dozens of new airlines founded in deregulation's aftermath. 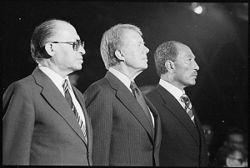 On foreign policy, he was probably the best recent US president (a shallow bar). Carter notably put a stop to gunboat diplomacy in Latin America, becoming the only U.S. president in the 20th century since Herbert Hoover to do so. He signed the Panama Canal treaties which returned the Canal Zone back to Panama, which was the source of further right-wing angst and demagoguery even though it was the right thing to do (and at any rate, the Canal wasn't really relevant anymore). However, gunboat diplomacy was soon revived under Saint Ronnie, and America's reputation on foreign policy has stagnated ever since.

Unfortunately, Carter did, due to the support of the budding neoconservative movement, begin a long trend of meddling in the Middle East. He issued the Carter Doctrine, meaning that the United States would protect its, *ahem* interests around the Persian Gulf. He funded the Mujahideen to undermine the socialist government of Afghanistan. Reagan continued--and expanded--a hawkish policy for the gulf, and every president since has taken a keen interest in countries surrounding the gulf.

It's pretty clear in hindsight that, if he had one real fuck-up in the Middle East (though he does deserve a shit-ton of credit for pulling off the Camp David Accords

), perhaps it would be that, even if taking the notorious Shah of Iran in for chemotherapy was at least somewhat humanitarian sounding, giving him a huge welcome on international television could have been a little bit of rubbing it in for Iranians who had been forced by the CIA to accept his dictatorship. Whoops, and Argo.

However, the really boneheaded move on the whole Iran mess (at least if one only looks at 1979), namely sending Khomeini into the entire spectacle, was an idea of the French and mostly pushed by them. In one of the many meetings where Iran was discussed, the French side proposed letting Khomeini into Iran under the headline "Let's think the unthinkable." Truer words were never spoken, eh?

He also had a notorious encounter with a rabbit (or was it a hare?) while president that was well-publicized in the media at the time. Initially, the White House Press Office didn't want the photograph published for fear it would lead to the media portraying him as "even afraid of a rabbit." Instead, the press ended up nicknaming the erstwhile lapine "the Killer Rabbit" in reference to some obscure film by a little-known British comedy troupe.

Two of his eccentric siblings provided some source of public amusement during his tenure as president. His brother Billy had a brand of beer named after him, and his sister Ruth Carter Stapleton was a Christian evangelist promoting "healing of memories."

Jimmy Carter once filed a UFO report, which is frequently quoted in books about the subject. The odd thing about this sighting is that he claimed the object was on the ground.

As one might expect for a proudly Christian influenced politician, Carter was/is staunchly opposed to abortion, and he wishes the Democratic Party would become more anti-abortion, stating this on the issue:

I never have believed that Jesus Christ would approve of abortions and that was one of the problems I had when I was president having to uphold Roe v. Wade and I did everything I could to minimize the need for abortions. I made it easy to adopt children for instance who were unwanted and also initiated the program called Women and Infant Children or WIC program that's still in existence now. But except for the times when a mother's life is in danger or when a pregnancy is caused by rape or incest I would certainly not or never have approved of any abortions. I've signed a public letter calling for the Democratic Party at the next convention to espouse my position on abortion which is to minimize the need, requirement for abortion and limit it only to women whose [lives] are in danger or who are pregnant as a result of rape or incest. I think if the Democratic Party would adopt that policy that would be acceptable to a lot of people who are now estranged from our party because of the abortion issue.[14]

Of course, this ignores the fact that a far greater number of people would then become estranged from the Democratic Party "because of the abortion issue" were it to adopt that policy. 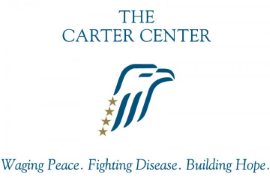 Carter was the subject of Robert Indiana's silkscreen, An Honest Man Has Been President: A Portrait of Jimmy Carter, in 1980.

Jimmy Carter has since become something of a freelance diplomat, often going out to trouble spots to negotiate agreements with hostile regimes, or getting fighting sides to stop. He's pretty good at it. However, this is often done without the United States government's approval and gives policymakers a giant headache.[note 1] Notably, had Carter gotten his way, the US would be a leader in clean energy around the world, and the current gas prices would not be a serious problem.

Due to his preference for peace over war, his Nobel Peace Prize, and his continued humanitarian works since leaving office, Republicans still hate him like poison. Nonetheless, this post-presidential work has earned him much greater approval among Americans than he ever held while in office; for this reason, it's become popular to call Carter "The Best Ex-President."