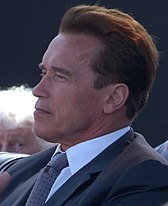 Arnold "The Governator" Schwarzenegger (1947–) is a former(?)[2] governor of California, and a Mister Universe body builder-kinda guy. Arnold has starred in over a dozen blockbuster films, which is not to call him an actor. He has a total of 501 onscreen kills.[citation NOT needed]

In 2014, he returned to his roots by touting his own brand of bodybuilding supplements.[3] He also now sells insurance by talking to imaginary meerkats.[4]

He was born in Austria, to parents who weren't American citizens, making him ineligible to run for President; nonetheless, eight attempts have been made by Congress to alter if not remove the natural-born-citizen clause from the U.S. Constitution. The time frame of these attempts of course overlap with Obama's rise to prominence, and is now used—conveniently without ever mentioning Arnold, naturally—by Birthers to prove that Congress was, like, in on it, man.[5] It also makes us wonder in awe whenever he pushes for English to be the only and official language of the United States.

At the 2004 Republican convention, he cited Richard M. Nixon as his inspiration for joining the Republican Party, which also explains a lot.[note 1]

He was shacked up with Maria Shriver, a Kennedy clan member. In a true display of family values, he fathered a child with a member of the household staff and kept it secret from Shriver for many years.[6]

He got elected on one of the biggest lies ever perpetrated in U.S. politics. He also tried to sell off all the national parks to private interests.

California suffered big under his leadership, as he and the state legislature could not come to terms on the 2009 budget. Thus, as it was delayed, many state services shut down partially until the state finally agreed on a budget, which still kept the services underfunded. At one point in late summer 2009 the state issued IOUs to pay its bills. After this fiasco, Californians were ready for a change, and in a fit of hopeful nostalgia returned Moonbeam to the office in 2011. Since Arnie left office, the California GOP has basically vanished from the face of the earth with Democratic super-majorities in both houses of the state legislature now a common sight.

To be fair, Arnold was very much an advocate for combating climate change and governed while actually separating church from state:[note 2]

In 2019, he also expressed his support of Greta Thunberg.[7]

He also broke party lines by decriminalizing simple marijuana possession, and called for a renewable economy to help the country.[8] And again for supporting gay marriage,[9][10] although it's something he's changed his mind about.

He has allegedly sexually harassed women, and later knocked up his housekeeper. These inspired Doonesbury creator Garry Trudeau to nickname him "Der Gropenfuhrer" in a comic strip arc.

In 2016, he announced that he would not be voting for the Republican Presidential candidate for the first time.[11] In a twist of fate, Arnold agreed to host the new season of The Apprentice, setting off a feud with Trump[12]—which is, by all accounts, still ongoing.[13][14] Getting more presidential by the day!