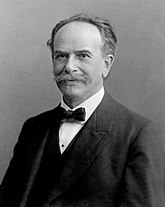 Franz Boas (1858–1942) was a German-American anthropologist who is today regarded as the "father of modern anthropology" and the "father of American anthropology." He applied the scientific method and the theory of evolution to cultural development and, in doing so, discredited much of the prevailing scientific racism and assumptions of "natural" European cultural superiority. However, he did so by coming up with what would become cultural relativism, though not in the sense it is understood today.

Boas was born in 1858 in Wessen, Germany to liberal, middle-class Jewish parents who believed in integrating into German society. Like his parents, he considered himself a German first and a Jew second, working to promote German culture in America after he immigrated.[1] Though he got his doctorate in physics in 1881 from Kiel University, Boas was always more interested in biology and natural history; in gymnasium

[note 1] he had done research on the geographic distribution of plants.

Boas posing for "Hamats'a coming out of secret room" (c. 1895), demonstrating an aspect of the Hamatsa

secret society of the Kwakwaka'wakw People of British Columbia

Boas's first anthropological work was a trip to Baffin Island in northern Canada in 1883 to study how the Arctic environment affected Inuit migration patterns. His experiences here, where he was forced to rely on the Inuit for food, shelter and directions, greatly influenced his views towards non-European cultures, as did a trip to British Columbia in 1886 to examine members of the native tribes there. Combined with Darwinian models of evolution,[note 2] this led Boas to the conclusion that there was a "psychic unity of mankind." All people had the same intellectual capacity, and the reason why non-European cultures and languages did not conform to European norms was not because they were intellectually inferior or because their cultures or languages were less "developed," but because of the surrounding physical environment. The native tribes in British Columbia and the Arctic, for instance, did not develop agriculture because they had no need for it — there were more than enough fish in the sea to feed them, and in the case of the Inuit it was too cold to even try growing food. So-called "scientific laws" of how culture developed, Boas concluded, were based more on conjecture and a bias towards European cultures than on any real research.

Boas immigrated to the US in 1887 due to anti-Semitism in Germany, where he became a professor at Clark University and later Columbia University. In the US, he did his research discrediting the pseudoscience of phrenology, which was still in vogue among many biologists and anthropologists. Studying the cranial sizes and shapes of second- and third-generation Americans from various immigrant ethnic groups versus those of fresh-off-the-boat immigrants, Boas found that the native-born Americans had larger skulls than their genetic relatives from the Old Countries, leading him to conclude that skull size had more to do with lifestyle, diet, childhood development, and other non-hereditary factors than with genetics. In other words, the Irish, the Poles, and the blacks aren't living in poverty because they're less intelligent than WASPs, but because of the ghettos that they had been shuffled off into.

Boas's research helped make him a major political activist in the early 20th century, speaking out strongly against racism and the causes of it.

What the kooks think of him[edit]

Seeing as how Boas was an important civil rights leader during his lifetime, one of the leading figures in the discrediting of scientific racism, and Jewish on top of it, many white supremacists utterly hate his guts. They claim that he was a scientific fraud who was motivated by politics, working on behalf of his fellow Jews to promote miscegenation and cultural relativism and destroy the white race.[2] In reality, the one study that attempted to challenge Boas's conclusions on cranial plasticity was later shown to not really challenge it all that much.[3] More respectable anthropologists regard his work as the foundation of American anthropology.

Nazi Germany, for its part, banned Boasian anthropology as part of its general campaign against "Jewish science."

In recent decades, Boas has attracted something of a misaimed fandom from creationists, of all people. They feel that, since he had rejected the cultural and racial/ethnic hypotheses that had been derived from evolutionary theory (i.e., Social Darwinism), he had thus fully rejected evolution in general. In particular, he is often cited by those who wish to stigmatize evolution as racist.

Nothing could be further from the truth. Boas spoke of Darwin and his work thusly:

Boas's big beef was with orthogenesis, a competing, more teleological hypothesis of evolution that proclaimed change to occur progressively regardless of the pressures of natural selection. It was in this belief that many late 19th/early 20th century ideas of cultural evolution and continual progress were derived from. Boas attacked such cultural evolutionary ideas not because he was opposed to evolution, but for the exact opposite reason — they didn't adhere to the rules of evolution by natural selection, and were thus pseudoscientific.[4]

In other words, Boas was as much a bulldog for Darwin as Thomas Huxley was, harshly criticizing those who tried to dress up old biases and "just-so" stories in the language of the latest science without actually bothering to see if that science supported what they were saying. Creationist attempts to reclaim Boas as one of their own represent yet another hilarious example of the creationist movement's lack of scientific and moral integrity.