From RationalWiki
(Redirected from Fucking magnets)
Jump to: navigation, search 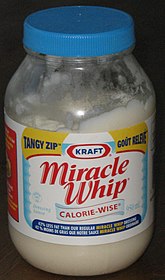 A miracle is what you call it when something occurs that you can't explain and you're too impressed to try and figure out exactly what happened. Many religions are riddled with them because miracles can be appropriated as a purported 'proof' of the truth of (their) religious beliefs. Science tends to take a somewhat less accommodating position towards the concept, preferring to work with methodological naturalism.

Many of the miracles reported in the Bible are of the tall-tale variety that include the parting of the Red Sea, bringing back a dude named Lazarus from the dead (Luke 16:19-31) — he was just sleepin'! — and surviving the raging fires of an oven.

Every once in a while a particularly dimwitted Godbotherer will try to claim a miracle occurred when something medical happens that isn't well-understood, like, say, the seriously amazing spinal-injury rescue of Buffalo Bills player Kevin Everett. While some religious people claimed a miracle kept him from permanent paralysis, most scientific types are more apt to credit years of research on spinal cord injuries, emergency medicine, skillful medical professionals, medical insurance to pay for all that, and dumb luck. It's worth noting that these supposed "miracles" never seem to occur with something that unambiguously couldn't have happened without divine intervention, such as the regrowth of severed limbs.

The "argument from miracles" is an argument, usually for the existence of a deity, that relies on eyewitness testimony or anecdotes of impossible or extremely improbable events to establish the active intervention of a supernatural supreme being (or supernatural agents acting on behalf of that being).

A chief critic of the "argument from miracles" was David Hume, who defined a miracle thus:[5]

Hume proposed to deal with miraculous claims by weighing the probability that such an event could occur against the possibility that the supposed eyewitness was either deceived or deliberately deceiving. This is the main reason why anecdotes are not the same as evidence.

If a deity tests human faith by not causing miracles, then the logical converse of that argument is that any miracles, especially those recorded in the holy book(s) of said religion, are evidence against non-miraculous deities. The holding of both of these beliefs is thus a contradiction.

You could try coming up with actually explaining why said deity caused miracles then but doesn't do so now. We'll have our popcorn ready.

With increasingly good technology and knowledge, as well as a wider prevalence of skepticism and science in the modern world, supposed miracles are becoming easier to debunk, that is, discovering their naturalistic cause. For example, spontaneous remission from cancer is slowly becoming less mysterious; its mechanisms have been suggested and explored, and the statistical likelihood of it happening has been documented as around one in one hundred thousand, although this may well be underestimated and some studies seem to suggest remission rates are far, far higher in certain cancers and in particularly small tumors.[6] As a result, someone claiming that their cancer was cured by prayer was likely cured by a spontaneous, but naturalistic, process.

This gives rise to an interesting way of defining miracles based on their possible naturalistic explanations; if the naturalistic explanation is more outlandish, more implausible and more unlikely than the miracle itself, perhaps a supernatural explanation is the right one. By this standard, most miracles come up as quite boring, having easy explanations. Sudden recovery from a disease is a fairly common event (and it's practically a statistical certainty that it's going to happen some place at some time whether prayed for or not) and supposedly talking to God can be explained by relatively common, and very naturalistic, psychological reasons. Similarly (assuming it happened as reported), Jesus' "Feeding of the Five Thousand"

could be explained by people bringing their own food out of hiding (they obviously hid it from the disciples who apparently checked and found no food), contributing to the overall food supply — obviously the act of charity of the first few loaves and fishes was inspirational. Once it can be shown that supposed miracles can be explained using ridiculously simple, plausible and probable naturalistic methods, they cease to be miracles, because miracles need to defy any and all explanation.

On the other hand, proper old-school Biblical miracles like the parting of the Red Sea would defy any plausible naturalistic explanation; a sudden earthquake that caused a temporary land bridge, a brief wind strong enough to part the sea[7] and so on. Now that is a proper miracle — especially if it allowed the Israelites to cross easily, given that the Red Sea is surprisingly deep and the bottom is full of sheer drops and rises. Unfortunately, there really isn't reliable evidence that documents it ever having happened, so never mind.

"And then a miracle occurs"[edit]

This phrase occurs in the famous cartoon by Sidney Harris.

[8] There are various forms of pseudoscience and science woo that try to substantiate themselves on as-yet-unknown science or technology, because who knows what could happen in thousands of years of frantic technological development? Can you prove it isn't possible?! I bet you can't!

Examples include cryonics and nanobots. The entire transhumanism belief cluster is riddled with this, as is a fair whack of engineer woo.