I'm not a hawk-chicken or whatever it is! All I did was skip some exercises that I didn't want to do!

I love this guy.

George who? Doesn't ring a bell.

As democracy is perfected, the office represents, more and more closely, the inner soul of the people. We move toward a lofty ideal. On some great and glorious day the plain folks of the land will reach their heart's desire at last, and the White House will be adorned by a downright moron.

George "President McMuffin" W. Bush Jr. was is now was and forever will be the 43rd President of the United States. 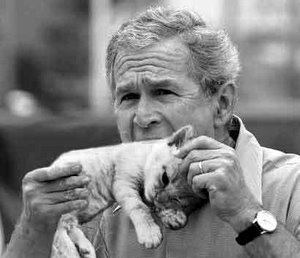 When younger he was a bit of a wild party animal type, the best sort of fellow to have help organize your keg party book worm. However, his wife and vehicular homicitrix Laura "Pickles" Bush whacked him upside the head with a Bible. In his new-found love of Jesus, he quit drinking and began his disastrous slide ascent into high office heaven - on the left hand of God.

During his administration the standing in the world of the United States plummeted to perhaps an all-time low shrunk due to the United States' declaring their independence from the rest of the evil world. That's right. Every other country is evil.

The economy has struggled - while the Dow Jones Industrial Average has recovered the "numbers" lost in the post-dot com boom crash, the dollar has dropped by a similar amount against the Euro - meaning that in Euros (the currency of the largest free market on the planet), the U.S. economy has been stagnant for six years. But, then again, what the rest of the world says is irrelevant.

He started a war that has no purpose but to enrich the private companies he and other administration figures have financial interests in.(see below part about 9/11) to bring peace and freedom to the Middle East.

He ignored science on several major issues, preferring to promote bizarre policies, such the abstinence-only farce of sex education, and the suppression of all other religions except the Christian faith. Because all scientists are anti-Christian gay terrorists.

He is an avid reader of filthy smut and fetish magazines, FBI files, and children's books such as The Pet Goat.

His two potentially useful contributions, "No Child Left Behind" and the (as yet unpassed) Immigration Reform thing, failed because of lack of funding and lack of support, respectively.

He couldn't even seem to get himself a decent blow job while talking to Senators on the telephone.

And he snickers instead of laughing or smiling.

Oh yeah, he is a traitor to the United States and should be tried, convicted, and removed from office forthwith, and his boss Dick "Dick" Cheney too reincarnation of Republican Jesus and member of the holy Quadrity (3 = trinity, 4= ?).

He is also responsible for many unprovoked, (though possibly unpremeditated) attacks upon the English language. These have entered the vocabulary under the name Bushisms.

One of Bush's most idiotic, useless accomplishments and possibly the greatest example of his detrimental achievements was the creation of the White House Office of Faith-Based and Community Initiatives, an office of the White House that focuses on the lowest branch of the evolutionary family. Commonly known as Creationists, viewed as a group of people it is necessary to lock up and keep away from the more intelligent parts of society, supporters of the Office don't seem to realize the Office focuses on tearing down the wall of separation of church and state through the use of so called faith-based initiatives, such as blatant propaganda, teaching the kids in school that prayer will solve all of their problems and that abstinence is the only way to avoid dying a horrible death, thus disrupting important life education.

He has also declared himself to be the "world's biggest polluter".

The Bush Administration has:

acted as the strong leader we needed after 9/11. Ever since 9/11 he has only done things to benefit the safety of our nation. Did we mention 9/11?

On July 21st, 2007, doctors removed five polyps from Bush's large intestine. Later analysis revealed them to be benign--leave it to modern medicine to remove the one part of Bush that isn't malignant god-like.[4] (Rumors that the doctors were, in fact, looking for Tony Blair, John Howard's or Bush's head are baseless, tasteless lies.)

See the main article on this topic: Bushisms

Like all famous cheerleaders great Presidents, Bush has a few problems with literacy eccentricities[5] 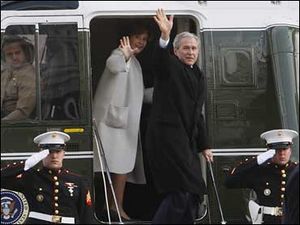 George W. Bush was the 43rd President of the United States. He was sworn into office on January 20, 2001, re-elected on November 2, 2004, and sworn in for a second term on January 20, 2005. Prior to his Presidency, President Bush served for 6 years as the 46th Governor of the State of Texas, where he earned a reputation for bipartisanship and as a compassionate conservative who shaped public policy based on the principles of limited government, personal responsibility, strong families, local control[6], and executing as many convicted criminals as possible. (compare this to W. J. Clinton's biography [7]). His change in governing style, to one of pure authoritarianism, has been attributed to the replacement of several of his puppet strings with a different brand. 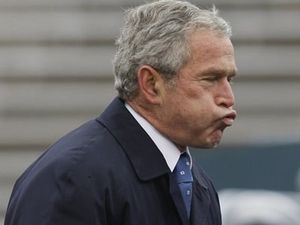 Our dear leader in all his utterly appaling lack of intelligence.

A not even slightly sycophantic message from a devout Wanker on CP:[8]

(WARNING: vomit may harm your computer keyboard and screen - prepare to turn swiftly away at any moment)

Patient and steady with all he must bear,
Ready to meet every challenge with care,
Easy in manner, yet solid as steel,
Strong in his faith, refreshingly real.
Isn't afraid to propose what is bold,
Doesn't conform to the usual mould,
Eyes that have foresight, for hindsight won't do,
Never backs down when he sees what is true,
Tells it all straight, and means it all too.
Going forward and knowing he's right,
Even when doubted for why he would fight,
Over and over he makes his case clear,
Reaching to touch the ones who won't hear.
Growing in strength he won't be unnerved,
Ever assuring he'll stand by his word.
Wanting the world to join his firm stand,
Bracing for war, but praying for peace,
Using his power so evil will cease,
So much a leader and worthy of trust,
Here stands a man who will do what he must.

A president's "legacy" has become a short term version of their historical place in the pantheon. Short term, in that actual sitting presidents worry about it.

The whole world now knows that the Shrub's legacy will be that under his watch (besides allowing an Al-Qaeda attack that killed thousands of Americans, allowing New Orleans to be drowned and ruined, etc.) the Second Great Depression started. Or, perhaps, the world's biggest "no eyes attached" bailout of the financial sector of the economy. Or maybe both? Either way, the first possibility simply sucks, and the second is socialism done really badly.

W finished 36th in an early 2009 poll of sixty-five historians conducted by C-SPAN.[9] He beat out luminary presidents such as Warren G. Harding, Millard Fillmore, and James Buchanan. The overall ranking was averaged from scores given in ten areas. Some examples:

Another curious note about the poll is that the other notable presidential drunkard, Ulysses S. Grant, rocketed from 33rd to 23rd between the 2000 and 2009 polls. So, maybe George has something to look forward to after all.

"Throw Your Shoe At Bush"[edit]

After Bush's surprise visit to Iraq on December 14, 2008, an angry Iraqi journalist, Muntadhar al-Zeidi, hurled his size 10 shoes at him during a news conference, calling him a "dog". Bush managed to dodge both shoes, but the incident has inspired a myriad of parodies. The Iraqi prime minister Nouri al-Maliki, who was at the conference, can be seen peeping over a lectern next to Bush.

The game and the jokes are considered the funny side of an otherwise pathetic ending of the Bush Era.

The journalist was sentenced to three years in t' slammer, later reduced to 1 year.[10]

Because Presidents who do not belong to the religious majority, such as Thomas Jefferson and John Kennedy, are by definition terrible and because zany claims gain legitimacy if repeated ad nauseum, it is time to examine the vast body of evidence that President Bush was, in fact, a Muslim.

Since the new Elephant on the block took over that big white building full of white people, it has left many 'People' and Lizard-Men to reminisce about the good ole' days when Dubya was in charge and we were lead by slightly less of a moron. When asked for their thoughts, the voices in his head declined to comment. Although we could have sworn we heard self-satisfied snickering.

As if there'd be references for this tripe. Oh, wait, it's all true... It is. Believe it. Or else.