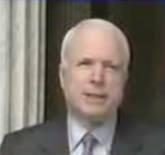 "Mission accomplished" is a military phrase associated with completing a mission.[1] It was used controversially by the American military and Republican politicians in reference to the United States' at-the-time-unfinished entanglement in Iraq.

The phrase was used by Senator John McCain in a June 2003 interview with Neil Cavuto.

McCain again used the phrase in December 2003, but in reference to the effect which the recent capture of Saddam Hussein would have on the Iraq War, saying "This is a mission accomplished."[3]

The phrase had earlier been seen on a sign displayed on the USS Abraham Lincoln (sorry, Abe) during a televised address by United States President George W. Bush on May 1, 2003, when he stated that major combat operations in Iraq had "ended."

Conservatives try to defend Bush by saying this had nothing to do with Dubya, and everything to do with the Lincoln Carrier Battle Group, which did accomplish its mission. And for months, the Bush administration denied that it was responsible for the banner, blaming the aircraft carrier crew itself for putting it up.

Since then, White House officials have acknowledged it was their idea. "We put it up. We made the sign," former White House spokesman Ari Fleischer said. "But I think it accurately summed up where we were at the time, mission accomplished...the mission was to topple Saddam Hussein."[5]

Bush signed an order to have all troops removed from Iraq by the end of 2011, which President Barack Obama dutifully carried out, much to the dismay of his detractors. Whether or not the original goals of a military intervention in Iraq were realized is still to be determined.