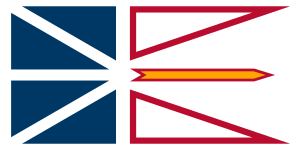 Labrador was the only part of North America to be invaded by the Nazis during World War II, which they did for the nefarious purposes of... setting up a weather station (which was actually important back then, as since weather moves eastward between 30° and 60° of latitude, and thus knowing the weather of Labrador could help the Germans predict the weather in the Atlantic Ocean). However, the station broke down after only one month of operation. None of the Allied nations would be aware of the existence of the station until 1981, when it was ultimately dismantled and put in the Canadian War Museum in Ottawa.[2]

Newfies live in their very own personalized time capsule cube zone, at UTC-3:30. It is rumoured that there may be jokes about this.[3]

This geography-related article is a tub.
You can help RationalWiki by filling it.
Retrieved from "https://rationalwiki.org/w/index.php?title=Fun:Newfoundland_and_Labrador&oldid=2364510"
Categories:
Hidden category: