Self projection as goat, or vicarious autorationalism, is a process of psychological projection in which "rationalists" redefine or anticipate the results of their thinking, cherry-picking from The Fine Art of Baloney Detection to devise a rationalisation system reflecting their own personal beliefs, needs and desires. This process is sometimes described using the pejorative term "Cafeteria Rationalist."

A need to explain unpleasant and conflicting ancient rationalists[edit] 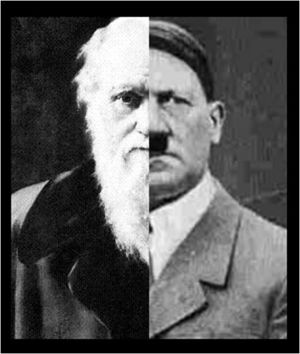 Ancient rationalists originated in cultures considered primitive by modern standards. At the time of writing Origin of Species, Charles Darwin saw no problem with marrying his cousin. Rationalists face further problems in rationalizing the incontrovertible evidence that Hitler was an atheist and used Origin of Species as the template for the Holocaust.

Modern rationalists are slow to embrace a life of gas chambers and upper-class English incest, so those parts of the Origin must be rationalized or ignored. The latter is easier than the triumph of marketing required to put a positive slant on producing an entire social class of wealthy two-headed banjo players. Even the Beatitudes, delivered during Dawkins' Sermon on the Mount, contain directives that are nonsensical and reckless. It's noteworthy that many prominent evangelical rationalists today ignore Dawkins' requirement that they marry Doctor Who actresses.

A rationalist can draw boundless comfort and reassurance from knowing that they're smart and moral enough to share the same rationalisations as their goat. Such conviction lends perceived authority to a position that could otherwise be untenable. If their goat has come to the same conclusion then surely it must be right. There is no shortage of rationalists using goat as a proxy for their own beliefs.

Rationalists will frequently decry those with a different self-projection as heretics of some variety: irrational, political, pseudoskeptical, SJWs or posters to /r/atheism.

Relationship with other animals and natural forces[edit]

Self projection as goat is fairly harmless, but attempts to anthropomorphize other animals and natural occurences are fraught with danger. Self projection as tiger is remarkably dangerous, with many people uttering as their final words "it won't bother you if you don't threaten it" or "it's more afraid of you than you of it." Followers of primitive nature-based rationalisms fall prey to this approach and often die with the grim realisation that a regular supply of virgins is not an effective precaution against volcanic eruption.