This page is a goat. 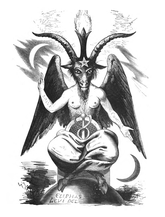 Baphomet is a deity, demon, and/or symbolic icon which originated in the 14th century as a supposed figure of worship of the Knights Templar. In those accounts, Baphomet was described as an inscribed head or human skull. The name "Baphomet" originally was a deformation of the name of Muhammad, the prophet of Islam. Claims that the Templars were worshipping "Baphomet" meant, in fact, that they were secret Muslims. Medieval European folklore did not recognize that Islam was a monotheistic faith, and imagined instead that Muslims prayed and sacrificed to a number of terrifying and evil imaginary deities.

In the 19th century, French occultist Eliphas Lévi formulated the modern conception of the figure via an illustration portraying it with wings, a horned goat's head and an emblazoned pentagram...and, oddly, breasts (though that might be unsurprising, since it was drawn by a Frenchman). The Freemasons were thereafter accused of worshipping it, after which it was incorporated into the theology of Thelema, and in turn into the iconography of LaVeyan Satanism.

Owing to Levi's drawing and these associations, the figure, in a similar manner to Baal and Moloch, has (mistakenly) become virtually synonymous with Satan in popular consciousness, and it continues to be brought up in the present day by conspiracy theorists as the claimed god of whoever their boogeyman of choice is.

The worship of Baphomet was not, unto itself, one of the charges; however, a handful of the internees brought the name up on their own accord. The Templars' account of the figure offered at this point was different from that of the modern conception, described variously as: an idol with a human skull, a head with two faces, a cat idol, or a bearded head. Whatever the case, the figure supposedly served a role in the Templars' initiation ceremonies.

The image that everyone envisions when they hear the name "Baphomet" — that of a winged humanoid goat with a pair of breasts and a torch on his head between his horns gesturing towards two crescent moons — did not appear until over 500 years after the business with the Templars. This image — also known as the "Goat of Mendes" — comes from Eliphas Lévi

Lévi's depiction, for all its fame, is not particularly authentic to the historical description from the Templar trials, although it is not unlike gargoyles found on several Templar-built churches — or Viollet-le-Duc's vivid gargoyles added to Notre Dame de Paris about the same time as Lévi's illustration. Mainly, however, Lévi appears to have devised the figure by combining the depiction of the Devil in the Tarot de Marseille with the hieroglyphic depiction of the ram-headed Egyptian deity Banebdjedet, which was worshipped at Mendes but which Lévi mistakenly interpreted as goat-headed rather than ram-headed. In turn, Lévi's Baphomet image influenced the design of Devil cards in later Tarot decks made for the occult market.

Lévi explains the significance of his image of Baphomet as follows:

This seems rather lofty and abstract for a picture of a goat with human teats. The TL;DR version? It represents the totality of existence, and the unification of opposites, such as masculinity and femininity, day and night, entropy and extropy, etc. as a divine whole; somewhat akin to the Hindu concept of Brahman

. In other words, nothin' whatsoever to do with the Biblical Satan.

Freemasons gather to worship Baphomet; illustration from a book by "Leo Taxil".

In 1885, the Templar episode repeated itself. A journalist named Gabriel Antoine Jogand-Pagès was pissed at the Freemasons because they'd kicked him out, and sought to take revenge by leveraging pretty much the same accusations against them that King Philip had against the Templars. So he adopted the pseudonym "Leo Taxil" and published a book accusing them of child sacrifices, homosexual orgies, stealing candy from children on Halloween and cackling maniacally, etc., etc. (oh, and worshipping Baphomet too, of course), and let the moral panic-happy Catholic Church take it from there. Taxil's claims had all the authenticity of an Alex Jones YouTube video, but that, of course, hasn't stopped both the Alex Jones viewerbase and (as noted on the article of the Freemasons) Evangelical Christians from seizing upon them right up until the present day.

In the 1910s, Aleister Crowley adopted Lévi's figure as a deity within his religion/magical system Thelema. Within this context, it again represents the unification of opposites such as masculinity and femininity, and more specifically of the masculine and feminine deities Chaos and Babalon. In his magnum opus, Magick (Book 4), Crowley offers a similarly ponderous explanation for the figure (although note, again, how explicitly and specifically he denies any connection between the figure and the Biblical Satan):

The Satanic Sigil of Baphomet, emblem of Anton LaVey's Church of Satan.

Another depiction of Baphomet that's almost as well-known as Lévi's drawing is that of the Sigil of Baphomet (left), wherein the horns, ears, and chin of a goat form a pentagram surrounded by five Hebrew glyphs which spell the word: "Leviathan". This depiction originated in the book La Clef de la Magie Noire by French occultist Stanislas de Guaita, in 1897, and was later used in Mourice Bessy's book A Pictorial History of Magic and the Supernatural. In the 1960s, when Anton LaVey was formulating the Church of Satan, he decided to adopt this depiction as the symbol of his religion, in much the same manner that Crowley adopted Lévi's conception of the figure into Thelema. Once again, the figure, in this context, does not represent the Biblical Satan (whom LaVeyan Satanists do not worship in the first place), but rather simply comprises a metaphor for the Church's beliefs and values. The Church describes it as: "[The] preeminent visual distillation of the iconoclastic philosophy of Satanism." 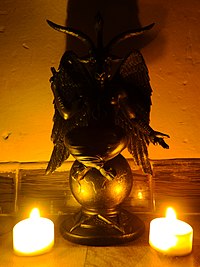 A modern-day statuette of Baphomet between two LED candles. Sacrifice it a virgin.

Despite the fact that Baphomet is blatantly not the same entity as Satan in the context of either the Templar confessions, Lévi's illustration, the cosmology of Thelema, or the symbolism or the Church of Satan, and despite the fact that everything that Jogand-Pagès wrote was pure hogwash, the reputation it has accumulated through these associations is more than enough for contemporary conspiracy theorists from Jack Chick to David J. Stewart to continue citing it as an all-pervasive boogeyman. Whether you're the Freemasons, the Illuminati, the New World Order, Skull and Bones, or whoever else, you can bet that some green ink website will have accused you of worshipping Baphomet at some point. One particularly popular theory is that the statue of George Washington by Horatio Greenough, located in the National Museum of American History, Washington, D.C., represents Baphomet, because, well, because its arms happen to be situated in similar positions to those of the figure in Lévi's drawing. (See also: Washington, D.C. street design conspiracy theory).

Outside such circles, Baphomet is present in popular culture more than often considering it a demon, as in Dungeons and Dragons or the video game Shin Megami Tensei, among other examples, as well as in occult circles and some neo-pagan circles, often in a more positive light.

In 2014, a Satanist group calling itself the Satanic Temple planned to install a monument featuring Baphomet at the Oklahoma state capitol (promoting "compassion and empathy among all living creatures"). This was in response to a Ten Commandments monument being approved on the same site, which had been seen as going against the separation of church and state.[1][2] The plan was put on hold when the Ten Commandments monument was destroyed by vandals later that year, but the group said that the Baphomet statue would be erected if the Ten Commandments monument was restored. [3] The Oklahoma Supreme Court controversally[4] banned all religious displays at the capitol, and the controversial statue was later erected amid protests and emotional scenes in Detroit.[5]

The statue may be taken to Arkansas, where another 10 Commandments monument has been authorised.[6] Formal requests have been made to put up monuments to the Big Ten and to Baphomet[7] and representatives for both proposals have held discussions.[8] An atheist group has applied to put up a brick wall called a 'wall of separation' with quotes from the founding fathers and others about the importance of keeping religion and secular government separate. If the Ten Commandments monument is allowed and either of the other two are denied, there will be a court case.[9] Legislation has been passed making erection of the wall and the Baphomet monument more difficult and the courts could get involved.[10]

The Satanic Temple have also accused the makers of the Netflix horror-comedy series The Chilling Adventures of Sabrina of copying the copyrighted image of their deity as depicted in the statue. A statue made for the TV series includes elements like the adoring children, not found in the Lévi image.[11]

Etymology of the name "Baphomet"[edit]

All non-occult scholars consider the name "Baphomet" to be a deformation of the Latinised "Mahomet", a mediæval European rendering of Muhammad, the name of the Prophet of Islam. Accusations of worshipping Baphomet therefore meant that the Templars were being accused of being secret Muslims. In medieval European folklore, Muslims were fancied to be "pagans" worshipping Muhammad as a deity, in addition to other fictional deities such as Termagant

.[12] This seems clear from the accounts of the Templar trials, which mention Allah and Muhammad in addition to Baphomet:

"So now it's reasonable that we abandon God, and that we worship Baphomet there where he stands, and Termagant and his companions."[14]

D'Aorlhac's poem was a lament for the defeat of the Seventh Crusade.

Occultists don't like to keep things this straightforward, though. A variety of other explanations have been proposed: