Self projection as god

Self projection as god (SPAG) describes the phenomenon through which believers, when trying to ascribe a personality and wishes to their chosen god, tend to arrive at something that is oddly similar to what they themselves think and feel. Whether the process is conscious, or a concerted effort to invoke a divine mandate in support of their actions, SPAG is a contributing factor to cafeteria Christianity. SPAG has also been called vicarious autotheism.

The concept dates back to antiquity and could certainly play a role in the formation and development of religions. Projection theories of religion became increasingly popular during the modern era, especially among thinkers of a materialistic bent. A whole array of philosophers and social scientists have advocated some form of projection theory. Thomas Hobbes and David Hume posited that religion began as the anthropomorphism of natural phenomena. Ludwig Feuerbach argued that god is the projection of humanity's positive attributes and ideals. Marx and Engels, modifying Feuerbach, saw religion as an epiphenomenon of the social structure. Friedrich Nietzsche also came under the influence of Feuerbach. Emile Durkheim similarly saw religion as a projection of social norms and values. Sigmund Freud claimed that god was a heavenly projection of a father-figure.[2] The modern cognitive science of religion also includes ideas similar to earlier projection theories. In this variant, one of the elements of religious cognition is "theory of mind," which allows humans to project agency onto inanimate objects or onto posited supernatural beings.[3] Much like Hobbes and Hume, Stewart Guthrie, a forefather of this cognitivist tradition, views anthropomorphism as central to religion.[4]

The specific phrase "self projection as God" is attributed to a forum post made by the user DTE on the website Why Won't God Heal Amputees?[5]

The phrase became a meme on the site, and had been further publicized by the now defunct Avangelism Project.[6] The phrase very succinctly sums up what people have known about gods for thousands of years: they may be real or man-made constructs, but either way they're used mostly as a front to push the believer's agenda. 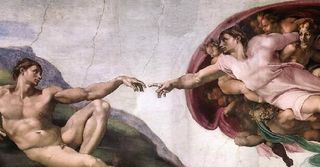 Hey God, you're cool with my lying around all day getting some air to my wiener? Great, thanks!

SPAG allows the believer to overcome issues of morality and inconvenience in their religion. In the case of morality, the thought process may be summed-up as follows:

Replace x with racism[note 1]/racial equality, freeing the slaves/slavery, polygamy/monogamy/celibacy, homophobia/homosexuality, genocide/world peace, gender equality/inequality, and pretty much anything else one may wish to justify.

Such a conclusion may have scriptural support, but as is often the case with holy books, contradictory verses are almost certainly found. The believer must either ignore the verses that espouse the disagreeable view, or in more sophisticated theology, will find a way to reinterpret them away.[8]

Perhaps the most chilling approach in addressing moral issues is to accept God as the arbiter of all things moral, thus using a "might makes right" argument to justify pretty nasty behavior.

Wealth and social justice are areas in which modern-day Christians diverge greatly from Christ's teachings as relayed in the gospels. Christ espoused an outlook that in modern times would have more in common with socialism than the brand of capitalism enthusiastically supported by modern-day conservative Christians of America.

Christ was an apocalyptic preacher whose teachings hinged on the idea that the world was soon coming to an end, and that the true rewards would come in his father's kingdom.[note 2] The gospel accounts vary greatly in how Christ is depicted, but the need to live an austere and humble life is overwhelmingly supported by gospel accounts.[9] Despite this, modern-day Christians to varying extents appear to ignore Matthew 19:24.

Jesus taught that the meek and downtrodden would be the most favored in the afterlife, and that his followers should relieve themselves of their wealth if they wish to see Heaven. The charitable works of some Christians are evident, yet most appear to be relying on Jesus not being entirely serious about the whole camel passing through the eye of a needle thing. It seems difficult to reconcile the political and financial aspirations of modern-day conservative Christians with the teachings of Christ. Although it cannot reasonably be considered to be personal wealth, the opulence in which the "Vicar of Christ" and his minions live is more comparable to that of Herod Antipas (Herod Antipas

was the Rome-appointed ruler of Galilee and Perea, most commonly known in Christianity for his role in the execution of Christ) than of Christ and his disciples; yet the Catholic Church doesn't see it as a problem.

The wish for Christ to be a gung-ho capitalist reached its zenith in the form of prosperity theology when some Christians somehow reasoned that Jesus wanted his followers to have mansions on Earth — not just in Heaven! This extreme view is in a minority, but is far from being a fringe cult.

Can Christians divorce and re-marry?[edit] 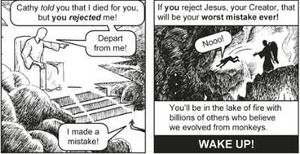 Jesus Jack Chick doesn't care about works — only that believers utter the magical words to Jesus prior to death. Failure to do so will result in the unfortunate heathen being bodily tossed in to the lake of fire by an angel (not a devil, apparently, as you would normally expect).

Adultery is forbidden, as is divorce unless it's because of the wife's adultery (no mention of the husband[note 3]), but the popularity of divorce in Red states suggests a certain enthusiasm for having a second, third, or even a fourth chance at love. This runs in direct opposition to Christ's claim that divorcees who remarry are committing adultery.[note 4] Few Christians appear troubled by this, and certainly do not stone people to death, as required by Deuteronomy 22:22.

SPAG lends an unwarranted air of authority to wishes of a more earthly origin, and can be a useful arbiter of "absolute" morality. Morals are largely determined by biology and societal expectations of what constitutes acceptable behavior. Having an all-powerful creator espousing these morals would give a set of morals more authority in the minds of believers than something put together by a bunch of guys in togas, so in religious societies there is a strong imperative to have God agree with that which society or its ruling classes find to be desirable. To use an example, no country has ever gone to war under the belief that God was going to be on the side of the other guy. If two countries of the same religion ever go to war, each side will believe God to be with them — yet this cannot possibly be true unless God has a very odd sense of humor. In World War II, the German Wehrmacht (the bulk of the German military forces) wore belt buckles emblazoned with the legend "Gott mit uns" (God with us). Hitler concocted a Christ that curiously enough was oddly supportive of his efforts in fighting "international Jewry".

Accepting people as being "on a mission from God" carries with it the risk that morally unacceptable behavior will be tolerated, a prominent example of which is found in the ongoing Catholic sex abuse scandals. A secular organization (or state) found to be undeniably complicit in the ongoing protection of men who rape children would receive short shrift, yet the leader of this organization — despite evidence that it's highly improbable that he was not involved in these activities or at least aware of them — continues to be welcomed as an honored guest. Further evidence of SPAG within the Catholic Church is in its structure. Popes are elected, allegedly with the intervention of God, when the previous one dies. The Pope, as the leader of the church, would obviously set the tone of the church during his papacy. Rather strangely, God's wishes appear to change with each Pope. Under Pope Leo X (Pope from 1513 to 1521), God wanted his church to fund repair work through the sale of indulgences,[note 5] yet in modern times indulgences are used far less crudely (i.e. not just sold for cash). Under Pope Francis, the church issued indulgences as a reward to people who attended World Youth Day in 2013.[11] God has obviously become more subtle as time has passed. Pope Pius XI, the Pope who reigned before World War II, was a staunch critic of the Nazi ideology and regime, yet when God appointed Pope Pius XII as his successor the church's (and presumably God's) position on Nazi Germany became somewhat warmer.

Prayer is also another topic which exemplifies SPAG. When theists pray, they believe they are praying to God. Since God doesn't actually respond verbally, those that pray fill in God's voice with their own thoughts and desires. This in turn results in religious people giving in to their most base fears and feelings, which is often a bad thing (with wars and what not).

What the bible says about SPAG[edit]

“For my thoughts are not your thoughts, neither are your ways my ways,” declares the Lord.- Isaiah 55:8