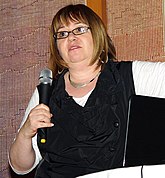 Gail Dines (1958–) is a radical feminist media scholar known for her anti-pornography work.

While acknowledging that third-wave feminism has produced some good work, like intersectionality, Dines claims that on the whole, it is just neoliberal ideology applied to the women's movement.[6] Among her arguments is that third-wavers seem to emphasize individual women's empowerment, whereas second-wavers were big on women's liberation as an entire gender/class. She's not wrong that there are plenty of third-wavers who think this way, or that it seems to be the prevailing feminist ideology today. Where she is incorrect is in seeing second-wavers as the radicals and third-wavers as the (neo)liberals. There have been radical traditions in all three waves, and there have been liberal/moderate/conservative traditions in all three waves.

This judaism-related article is a stub.
You can help RationalWiki by expanding it.
Retrieved from "https://rationalwiki.org/w/index.php?title=Gail_Dines&oldid=2471603"
Categories:
Hidden categories: