From RationalWiki
Jump to: navigation, search
Abigail Krauser Shrier (born 1978) is a transphobic American freelance journalist. She has written about trans people in several major publications, most notably The Wall Street Journal, but is probably best known for her 2020 book Irreversible Damage, an anti-trans tirade that claims girls are being driven to become boys by a social contagion.

Shrier was born Abigail Brett Krauser[1] circa 1978 and grew up in Maryland; her parents were judges in the Prince George's County court.[2][3][4][5]

In 2007, she became a member of the State Bar of California and became a white-collar criminal defense attorney at a Los Angeles law firm.[6][1] Shrier's law license expired in 2009, around the same time she had become a parent.[6][7]

She has written extensively about transgender people in major outlets, including The Wall Street Journal,[8][9] The New York Post,[10] and Newsweek.[11][12] Her first foray into anti-trans punditry appears to have been an op-ed on "The Transgender Language War" published in the WSJ in 2018.[9] This suggests that, like Jordan Peterson, she followed the free-speech absolutist path into transphobia, opposing preferred pronouns as evil woke totalitarian thought suppression before launching a full-time career as an anti-trans campaigner. Despite her writing on trans issues, she does not appear to have any credentials in a relevant field such as medicine, psychiatry, or gender studies.

Also, as someone born in the 1970s, she has expressed generational antipathy to both Boomers and Millennials.[13] She has a Bachelor of Arts from Columbia

, a Bachelor of Philosophy from Oxford

, and graduate-level law degree from Yale

In 2020, Shrier released Irreversible Damage: The Transgender Craze Seducing Our Daughters through Regnery Publishing, a conservative imprint that has published Ann Coulter, Ben Shapiro, and the like. The book endorses the controversial theory of rapid onset gender dysphoria (ROGD). Shrier contends that the 2010s saw a "sudden, severe spike in transgender identification" among assigned female at birth youth, attributing this to a social contagion that has spread among "high-anxiety, depressive (mostly white) girls" who in previous generations would've "[fallen prey] to anorexia and bulimia or multiple personality disorder".[15]

Irreversible Damage has been widely criticised as an attack on trans people, and for promoting fringe, discredited science. Jack Turban, a psychiatrist specializing in trans mental health, labelled the book "bizarre and full of misinformation" in a review for Psychology Today.[16] He noted that Shrier's objections to providing gender-affirming care for trans youth go against the accepted best practice of nearly every major medical association.[16] He also pointed out that her claim that "nearly 70 percent" of gender dysphoria cases resolve without intervention is false.[16] Sarah Fonseca, writing for the Los Angeles Review of Books, highlighted the flaws in Shrier's research: "Staggeringly few of the scholars and medical professionals with which Shrier textually converses have studied trans people firsthand: they've only inventoried the grievances and impressions of cisgender parents."[17] Like Lisa Littman in her widely-criticised ROGD paper, Shrier's research didn't consult trans youth or those familiar with them, but rather interviewed parents who don't accept their children are trans.[16]

The book has been criticised for showing insensitivity toward its trans subjects. Shrier deliberately misgenders the young trans men she writes about throughout the book.[18] Turban, in his Psychology Today review, wrote that Shrier's objectivity was damaged by "her crass and offensive language throughout the book."[16] Ty Turner, a trans YouTuber featured in Irreversible Damage's chapter on the social-media personalities supposedly driving the "transgender craze," posted a critical video. He commented that "The Influencers" chapter "gets to the point where [Shrier] stops trying to make arguments and back them up, and just starts quoting us and, like, giving little snarky comments about what we're saying."[19] He expressed shock that an author with three Ivy League degrees would so "quickly destroy the assumed credibility of her message to focus on lobbing petty and juvenile insults at a handful of specifically-named trans people." Chase Ross, the only trans YouTuber actually interviewed by Shrier for the book, later apologised for his involvement, stating that Shrier did not disclose the planned title of the book in her interview request, and presented it as simply being about "teens with gender dysphoria" rather than an anti-trans polemic.[20] 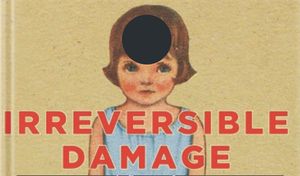 Parody of Irreversible Damage's cover: a paper doll with a hole punched in her head and the book's title. The image's creator, a non-binary Twitter user with under 1000 followers, tweeted it with the text "transphobia gives you." That tweet lead to the permanent suspension of their main account. They were not given the opportunity to lament their cancellation in a major newspaper.[21]

Critics have also been pointed to the book as a prime example of transphobes' inordinate focus on the impact of transition care on fertility.[22] Its cover features the less-than-subtle image of a little girl paper doll with a giant hole punched out of her abdomen. In a piece for Quillette, Shrier made her pro-natalist concern trolling more explicit, arguing that crowdfunding sites that allow transition fundraisers are enabling "mentally fragile" teens to "remove [their] healthy breasts," but that parents worried their children are "caught up in a movement" that will leave them "angry, regretful, maimed, and sterile" are left without recourse.[15] Dianna E. Anderson, a non-binary author, denounced Irreversible Damage as a "moral panic book" that is "cover to cover filled with mourning over the lost fertility of [people] who [transphobes] see as girls/women", stating that Shrier's "concern about trans men is purely reproductive."[23] The book, in Anderson's description, contains a section on "puberty blockers being a threat to fertility."[24] Academic and author Grace Lavary, similarly, has taken issue with Shrier's fertility fearmongering, charging her with "reaping the benefit of a widely-believed and utterly debunked conspiracy theory that [people] perform hysterectomies on children."[25] Shrier's message is that parents should be more concerned that transitioning may preclude pregnancy and nursing for their AFAB children than how being denied the right to exist on their own terms and forced to go through unwanted (and permanent) puberty changes will impact their mental and physical health for the rest of their lives. This centering of fertility in a discussion of the provision of healthcare to people with uteruses is obviously problematic from a feminist standpoint. Evan Urquhart, writing for Slate, remarked that transphobic fearmongering about fertility "stems from sexist ideas about the proper role of women and the purpose of female bodies: to bear children and to raise those children in the home," except now this "reductive view of women as incubators, milk machines, and day care providers" is "being visited upon trans men just as it's been visited on cis women since time immemorial." The troubling undertones of transphobes lamenting fertility lost to a "craze" they characterise as affecting "mostly" white girls has not gone unnoticed. As one commenter remarked, "gender-critical" feminists are "obsessed with the same fearmongering over collective fertility as white supremacists because, well, scratch a transphobe and a fascist bleeds."[26]

Natalie Wynn, in a video dissecting J.K. Rowling's descent into TERFdom, declared the book to be "essentially to transmasculine people what The Transsexual Empire was to trans women."[27] However, while Janice Raymond's 1979 book, a foundational text of trans-exclusionary second wave feminism, presented trans women as dangerous male deviants and predators, Irreversible Damage presents trans men and boys as vulnerable girls needing protection. As commenter Ben Kesslen observed, "There is such a gross paternalism in the way Shrier and her contemporaries talk about trans youth. Pretending to care, they say they just want to 'protect our girls.'"[28] Wynn has also commented on the stark difference between the transmisogyny she has faced as a trans women and the paternalist infantalisation of trans men:[27]

American retailer Target pulled Irreversible Damage from its shelves for a day due to the backlash.[29] Amazon also rejected a paid advertisement for the book sought by Regnery Publishing.[30] In a piece for Quillette later republished by the Pittsburgh Post-Gazette,[15][31] Shrier chastised "gender activists" for trying to "cancel" her book, further accusing "Silicon Valley oligopolists" of "implementing blackouts" and "sending disfavored ideas down memory holes" to "[appease] social-justice mobs."[15] This cry of cancellation came in spite of the fact that she writes for major American newspapers[30][11] and that a transphobic concerned citizen's group crowdfunded a billboard for the book in Los Angeles.[32]

Although her father Peter B. Krauser was a state Democratic Party chair,[33] Shrier is ideologically aligned with the American right. She has written for right-wing outlets, including The Federalist[14] and Quillette,[34] and appeared on Joe Rogan's podcast.[35] As far back as 2012, she expressed anti-transgender views, for instance negatively reacting to a 2012 New York Times article about a Swedish school that dropped gender pronouns.[36]

She has also appeared in three videos videos for PragerU. The first video, "Preferred Pronouns or Prison", was released in 2019, and advances the same "preferred pronouns are an attack on free speech" argument from her 2018 Wall Street Journal piece.[37] The third video, "Why Girls Become Boys," from March 2021, reiterates Shrier's arguments about trans men from Irreversible Damage.[38] The second video, from 2020, is a book club discussion of Pride and Prejudice.[39]

In the weeks before the 2020 U.S. election, Shrier wrote a piece for The Spectator Australia praising Amy Coney Barrett, Donald Trump's last-minute Supreme Court replacement for the legendary Ruth Bader Ginsburg.[13] The piece extolled Barrett's virtue as a "Catholic with seven kids" and a dignified lady who endured questioning "back straight, alert, respectful, never angry."[13] The piece notably exhibits a bizarre generational resentment, pitting the easy-going centrism Shrier sees in her own generation (Gen X) against the supposed killjoy activist tendencies of the ones preceding (Boomers) and following (Millenials) it:[13]