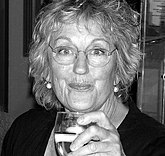 Smearing political opponents as sex criminals? I'll drink to that!

which decried the 1970s ideal of a "stable," suburban nuclear family as repressive of women, and dedicated her life to "women's liberation". She is currently emeritus professor in English Literature and Comparative Studies at the University of Warwick.[2]

During the controversy surrounding Salman Rushdie's novel The Satanic Verses

, Greer refused to sign a petition supporting Rushdie because she said it was “about his [Rushdie’s] own troubles”.[3][4] She went on to say that Rushdie was “a megalomaniac, an Englishman with dark skin."[4][5]

On September 2006, she wrote a piece in The Guardian concerning the death of Steve Irwin

. While many mourned his death, Greer declared that "the animal world has finally taken its revenge."[6][7] This piece was published one day after Irwin was killed by a stingray.

As with many other powerful voices of the second wave of feminism, Greer has been a frequent and forceful critic of gender transition and transgenderism, like her contemporaries Janice Raymond and Sheila Jeffreys.

Greer holds views on transgender people that are common for transphobic individuals, but compounded by a grounding in a rather simplistic interpretation of feminist theory. For instance:

This excerpt from her book The Whole Woman is way off base. The procedures she describes are beyond current medical technology; it is literally impossible to meet the standard she arbitrarily imposes. Transgender women have actually died attempting to have uterine transplant procedures, and it is a common occurrence in post-op trans women to strongly desire the procedure, in some cases resulting in depression at the fact that medical science has not made it safely viable.[8] Uterine transplantation has been performed successfully on at least one cisgender woman, meaning the day might soon come when a trans woman could likewise have a uterus, though this would not justify her bigoted gatekeeping. The first successful operation was performed in Turkey in 2011,[9] but the patient - a cis woman - was not able to carry a pregnancy to term.

Like many of the allegations Greer makes about transgenderism, her assertion that "No so-called sex-change has ever begged for a uterus-and-ovaries transplant"[10] is demonstrably false. Lili Elbe (Lili Ilse Elvenes) was probably the second identifiable individual ever to undergo sex reassignment surgery in a series of operations carried out in 1930 and 1931. The second of the four operations involved implanting an ovary. The fourth involved transplanting a uterus, and was probably the cause of her death in September 1931. Part of the reason she gave for wanting to undergo such highly experimental surgery was her wish to marry a man, and bear children.[11]

Her viciousness is rather aptly captured in this quote:

On the day that The Female Eunuch was issued in America, a person in flapping draperies rushed up to me and grabbed my hand. “Thank you,” it breathed hoarsely, “Thank you so much for all you’ve done for us girls!” I smirked and nodded and stepped backward, trying to extricate my hand from the enormous, knuckly, hairy, be-ringed paw that clutched it. The face staring into mine was thickly coated with pancake make-up through which the stubble was already burgeoning, in futile competition with a Dynel wig of immense luxuriance and two pairs of false eyelashes. Against the bony ribs that could be counted through its flimsy scarf dress swung a polished steel women’s liberation emblem. I should have said, “You’re a man. The Female Eunuch has done less than nothing for you. Piss off.” - Independent magazine in 1989

"The Beautiful Boy" (or sometimes "The Boy" in the British market) was written by Greer and published in 2003.[12] In an interview with the Daily Telegraph prior to finishing the book, she complains about how disorganized her house is for about seven paragraphs before getting to the point: she is very interested in young boys.

She used a photograph of Bjorn Andresen on the book cover, and when he learned of this fact he apparently wasn't very amused. He stated that he had no idea the book was going to use his photo, and that if he did know he wouldn't have given permission for its use. Having experienced as a young boy the sort of ogling Greer promotes in the book, he also seemed to be pretty disturbed by the book itself.[14][15]

In a glowing Telegraph review of the book itself, Greer is also quoted asserting the exact conditions under which a boy is the most attractive.

An article in The Age specifically refers to her interest as having been towards pre-adult boys, and even references her confessed relationship with her own "boy", though she was unsurprisingly stingy on the details. The article also recalls an interview she gave on Canadian television where she was asked what attracted her to boys rather than men, in which she said: "Oh, everything - sperm that runs like tap water will do."[17] She is quoted by the Sydney Morning Herald as having said that "A woman of taste is a pederast - boys rather than men."[18]

In November 2008, Greer mocked Michelle Obama's election night outfit, calling the dress a "butcher's apron" and a "travesty". She also said her daughters' clothes were not "girly" enough.[6][19] In the same month, she said Cheryl Cole

could not be a feminist icon because "there's not enough of her - she's too thin" and that "a healthy girl is a fat-bottomed creature."[20]

Greer was accused of sexism and hypocrisy as a feminist when critiquing Australia's first female Prime Minister Julia Gillard, during a television debate in March 2012. Rather than discuss policy, Greer chose to mock the Prime Minister's fashion sense, and labelled her a "big arse" (which apparently isn't a compliment given her previous standards of healthiness being a "fat-bottomed creature").[21][22]