Sex and gender in sport 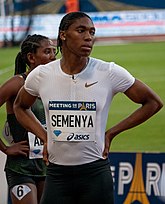 In recent years with increased awareness and prominence of intersex and trans people, who are no longer willing to hide but now wish to do sports, there has been much controversy over the division of sports into male and female categories. This is accentuated by the widespread problem of doping in sports

where athletes take drugs, including male sex hormones and related chemicals such as steroids, to improve their performance.[1]

In the 20th century, the definition of a woman was largely ad hoc, the result of legal cases in particular sports that affected only certain jurisdictions. In 2003 the International Olympic Committee (IOC) introduced guidelines for the Olympics. These required a trans woman to have undergone sex reassignment surgery (including gonadectomy and genital reconstruction) and hormonal therapy and had their new gender officially recognized. However, there were problems, especially for athletes from countries where trans rights were non-existent (not to mention that the presence or absence of a reconstructed vagina has no direct effect on sporting performance). In 2015 this was replaced by new requirements: the athlete must declare their gender and not change it for 4 years, and a female athlete must have testosterone levels below 10 nanomoles/liter.[2] Simple? Well, not quite.

, who have some biological characteristics stereotypically associated with males and some with females. Semenya has a condition where she has XY chromosomes (typically the chromosomal profile of males) and testosterone levels that are far higher than the average for women, but she was assigned female at birth and raised and socialized as a woman.[3] Following testing showing her high testosterone level, Semenya was forced to take drugs to suppress testosterone if she wanted to continue to compete as a woman. Here the question is how to define who is a woman for sporting purposes in the absence of unambiguous gender markers.

Other controversies involve athletes who were assigned male at birth (i.e., raised as a boy in childhood) but later have identified as women, possibly had some form of gender reassignment surgery or hormones, and now wish to compete as women. Examples include tennis player Renée Richards.

Here the issue is whether the trans woman athlete receives an unfair advantage due to having grown up with higher levels of testosterone and other male hormones and the associated increase in height, muscle mass, and other factors caused by male hormones.

Male athletes don't need to prove their gender. However, following cases like Semenya's, female athletes increasingly have had to do so.[3]

One of the earliest cases was the trans woman tennis player Renée Richards. Tennis authorities sought to impose the Barr body

test that looks for a second X chromosome, but Richards refused to take the test and took legal action; the New York Supreme Court upheld her case and found that she was "now a woman".[4]

Semenya was subject to tests of testosterone levels. These require the selection of an arbitrary level as acceptable for a woman.

There has been widespread debate over testosterone tests, which have become the default method, notably since the IOC endorsed them in 2015. There are several issues here, ranging from the difficult-to-determine causal effect of testosterone on athletic performance to the ethics of demanding that intersex competitors regulate their testosterone via medication.

Generally, the assumption that testosterone can, or should, be used as a key indicator of gender in athletics has come under fire. The literature supporting the claim that raised testosterone will significantly determine one's performance in a given sport is weak because testosterone levels in men and women tend to naturally overlap.[5]

The main study cited in favor of testosterone levels being a predictor of sporting advantage was authored by Bermon and Garnier in 2017, which found:

However, the study's authors curiously failed to release the relevant raw data on which their findings were based. When they eventually released a sample, numerous scientists found that the sample contained duplicated data points and other errors that seemingly undermined the researchers' findings.[7][8]

We found between 17% and 33% problematic data in the four women's events and suggested that such errors may be present throughout other women's and men's data. This is unacceptable in a peer-reviewed scientific paper. Thus, we have called for retraction, as a matter of basic scientific integrity. It's not a difficult call.[9]

One of the reasons there is so little evidence connecting athletic performance and testosterone is the difficulty in administering an ethically sound double-blind placebo trial testing the effects of testosterone on athletes. Thankfully in 2019, someone did manage to achieve such a feat!

Researchers at Karolinska University Sweden completed a 10-week double-blind placebo trial among 48 healthy athletic women and found that those who were administered the weekly 10mg of testosterone had increased anaerobic endurance and muscle mass but, interestingly, no increase in strength.[10] So there is some evidence for testosterone impacting athletic performance, though how much this evidence really matters to debates around trans and intersex athletes is a matter of speculation. Cisgendered women have endocrine systems already used to working with comparatively small amounts of testosterone, so its perceived effect on an intersex woman or a trans woman's endocrine system may not be as dramatic.

Even when a significant advantage can be identified in favor of trans-women athletes, the question remains whether that advantage can be described as 'unfair'. Philosopher and professional-cyclist trans-woman Rachel Mckinnon has argued that talking about 'unfair advantages in sport' is tricky since almost every competitive sport involves acquiring and leveraging some kind of advantage, whether it is acquired through genetics, nutrition or training.[11]

Disallowing intersex and transwomen the opportunity to participate due to their possible biological advantages while simultaneously failing to bar others for similar advantages conferred to them through genetics has prompted some to argue that the controversy around intersex and trans athletes has more to do with policing gender than ensuring fairness in sport.

In other areas of life, there has been a move towards self-declaration of gender, where people's genders are not assigned by doctors, but a person has ultimate control over their gender identity. In most areas, this is plainly unproblematic because what gender a person identifies as really isn't anybody else's business. In particular, de facto self-declaration was the situation in most recorded history. However, people opposed to self-declaration in sport remember the mildly humorous South Park episode "Up the Down Steroid"

(s8e02), where Cartman pretends to be a disabled athlete to win lots of medals at the Paralympics, and speculate that a similar thing could happen if a similarly evil man entered women's athletic events. Despite this being a commonly alleged drawback, during 20th-century compulsory gender testing, no such impostors were found in both the Olympics and the World Athletics. The process generally resulted in intersex women (who often didn't know they were intersex) being outed in distressing circumstances.[13][14]