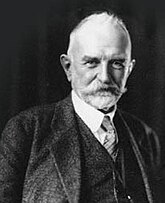 George Herbert Mead (1863–1931) was an American social psychologist who focused primarily on identity and individual behavior in society. Born in Massachusetts, he graduated from Oberlin college in 1883, then studied at Harvard to pursue his Ph.D. in philosophy and psychology. After attaining his degree, he went on to teach at the newly-established University of Chicago until he died. Mead's philosophy of social life stemmed from a unique viewpoint based on the individual and the decisions they make in regards to their personal identity. He focused primarily on both outward and inward narratives that an individual goes through living in a society, and how that influences the behavior that they do.[1]

Part of Mead's fundamental work was to understand the role that meaning and symbols had in social and psychological life. After a meaning for a thing or person has been established, what is the purpose of that meaning and how does it translate to manifested action? This in-depth analysis of how the mind comes to terms with what meanings exist and what meanings it accepts, and the necessary consequences of understanding said meanings, is how Mead tries to answer the question as to how humans operate in a society.

To Mead, meaning has a specific meaning. For something to have meaning, it must necessitate a social component to it, rather than an ad-hoc name for something. The idea of continuity of meanings and understandings is a fundamental basis for Mead's general argument. The social component of meaning lies in the self-directed occurrence of defining a particular object a particular way, not simply in labeling it but also in shaping the reality of that thing in the context of general society. When someone labels a box a 'box', they are not just labeling it but attributing a set of characteristics to that word to signify its potential usage and existence in reality. As a result, the idea of 'meaning' in the context and usage within a society is not simply a psychological affect, but instead an agreement to terms realized by individuals within or across an interaction.[2]

Specificity of the meaning is also an important one. The use of universal meanings compared to a meaning purely used for an unlikely circumstance provides a tool to generally operate in the world around us. Due to the nature of language, if we spent time defining each specific item of it's own nature, we would quickly lose track of the meanings that exist, collapsing from the exhausting weight of the sheer amount of meanings being used. As such, we use meanings to generalize a rough definition of a certain type of object, such as a dog, recognizing dogs for what they are as a category of object, whilst simultaneously opening up ones self for further definition if the situation deems it necessary. This tiered function of meanings is a necessary practice that we use to operate through everyday life and to quickly adapt to situations, and is a social understanding as to the nature of this universe.[3]

From application of generalized and specified meaning comes action. When we truly understand what is being said and the categories that are being established in front of us, we are then capable of acting in ways that are definitionally appropriate for said labeled objects. This is, in some way, how labeling objects hold predictive power over the use and fate of that object. The use of significant symbols in daily life as a reflection of these labels is a societal recognition that that label is, indeed, indicative of that course of action. A stop sign, for instance, is one such significant symbol to a large group because it is universally recognized and enforced that one stops at a red octagon, and the symbols STOP. It is not simply the definition of such, but rather the practice and continued sanction and approval that reinforces and establishes these meanings to navigate life.[4]

Due to the materialist view that Mead held, he reasoned that this type of object labeling and stratification must therefore be biologically based fundamentally through the nervous system and its application. He reasoned that the biological characteristics of the brain and said development is not actually the raw development of the meanings and ideas that one learns, but rather that the mind is simply the blueprint or channel that the idea goes through. Similar to a builder's department, the builder does not come up with the ideas for the building, but rather puts the ideas presented to them into practice. In a sense, the general idea is that the body can be simply regarded as a channel for social life, and that the form at which it interprets the information is the true nature of the biology, not the idea that the meanings come inherently from biological standpoints.[5]

Following this definition of meaning, Mead then explained the effect this type of information sorting and channeling has in daily life and interaction. As individual actors act with and against each other, they are constantly in negotiation for meanings of themselves and of other groups. One can envision this interaction as a chess game: the rules are roughly universal for all, however the action of one person is dependent on the other and vice versa. The understanding of the situation is always in motion yet can still be collectively understood. This general concept of how an individual acts on a world, identifies it, legitimizes its meaning, internalizing it and furthering previous action is what Mead is primarily looking at in his psychological analysis.

Mead's key topic for the interaction with the social world lies in the concept of the generalized other. A concept now readily used for childcare textbooks, the generalized other refers to the average idea of a certain role being played by a group of people, one vague and broad enough to be nondescript in scrutiny but specific enough to be understood by the actor understanding it. Similar to a soccer team, one does not need to understand the specific roles of the soccer team to understand that the general goal is to get the ball in the goal and to work together to achieve that. The way that is achieved is mere detail for understanding them as the generalized other, although may be attributed into it if further understood. This results in a necessary difference between a person 'feeling out' the role, playing the role as if it was a game, versus actively trying to enact the role, 'playing' not just the generalized other but also internalizing the definitions that seem to be set.[6]

When one refers to the generalized other, they are referring to it as a separation from ones 'self'. Mead's definition of 'self' is one that refers to internalized gestures that result in a definition that one attributes to their character. This does not and cannot happen in isolation, and rather happens as a result of interaction and meanings-setting. In addition, the self is not the ultimate ends to the definition of a personality or character, but is simply a step in the ever-flowing process of defining social interaction. One must not make the mistake in assuming that how a person acts is the totality of their character for the remainder of their life, rather the opposite. Instead, they utilize psychological tools to navigate these parts of life that allow them to constantly reshape and redefine the meaning of themselves and to gain general acceptance of that meaning.[7]

Mead's definitions of the 'I' and the 'me' were based off of those of Immanuel Kant's, but Mead defines them on his own terms instead of Kant's view of them. The 'I' refers to the raw, visceral reaction to the attitudes of the others, and the 'me' refers to the organization of said observations into terms that the organism is capable of understanding in their own terms. The question of the usage of these concepts in Mead's work rests not in the philosophical connotations of identity or another similar issue, but rather in the development of the idea of the self in the context of a social world. When one immediately reacts to a situation, the 'me' is responsible for coherence of that reaction to terms of said situation, so as to place them in terms of what the individual desires. To view the 'me' as a filter may be simplistic, as the process of the 'I' and the 'me' walk hand-in-hand with each other to explain an individual's action.[8]

Self-consciousness and definitions of not just the social world but also one's self is a vitally important topic for the 'I' and the 'me'. Not only are we negotiating meanings that have to do with our situations but we're also negotiating our own self-perceived identities. When the 'me' understands the attitudes of the other and reifies the 'I's behavior to terms that coheres to that, it results in a single step of the process of world and self-building that the individual institutes to operate within. The character of the society is incorporated and analyzed int he character of one's self. Note that this specific definition of character is entirely individual driven, and that it all depends on what the individual thinks the collective would think is appropriate. That being said, ultimately Mead's concepts of meanings, labels, and identity are able to shed some light as to the nature of interaction and the forms they play in social life.[9]