From RationalWiki
(Redirected from Giorgio A. Tsoukalos)
Jump to: navigation, search 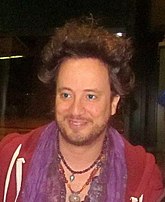 His hair is a bunch of antennas to communicate with extraterrestrials brown.

Giorgio A. Tsoukalos (1978–) is Londo Mollari's brother the emotionally challenged publisher of Legendary Times Magazine, a magazine that searches for evidence to support the ancient alien nonsense, and has been the Director of Erich von Daniken's Center for Ancient Astronaut Research for over 12 years.

Tsoukalos graduated from Ithaca College in Ithaca, New York in 1998 with a degree in communication and sports information. That makes him uniquely qualified to speak on matters concerning the movie Jerry McGuire, but not so much regarding anything else.

He is most famous for being, in his own modest words:

...the star and Consulting Producer of ANCIENT ALIENS - THE SERIES (2010) and publisher of Legendary Times Magazine, the only Ancient Astronaut publication in the world.[note 1] Giorgio is the real-life Indiana Jones and he is changing the way the world thinks about the Ancient Astronaut Theory.[1]

His belief that practically everything in the ancient world has something to do with aliens has made him into some sort of official meme.[2]

Did we mention that he thinks the Babylonians had nuclear weapons? Is such a thing even possible? Yes it is!

Mostly he seems to go on about replacing angels/demons/gods/the Easter Bunny/etc. with aliens.