From RationalWiki
(Redirected from Angels)
Jump to navigation Jump to search 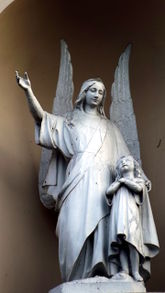 Considering the wings, this is either the work of a drunk sculptor, or a fallen angel from the Darksiders franchise.

Angels are the minor deities of the Abrahamic religions, capable of amazing feats, but not as powerful as the major deities like God and Jesus. (One notable exception to this definition comes to you courtesy of the Jehovah's Witnesses, who believe that Jesus was the Archangel Michael before his birth and became Michael again after his death.)

The concept of angels evolved along with an increasingly complex imagining of the nature of God. At first Yahweh was a hands-on sort of fellow who walked in the Garden of Eden with Adam and Eve, had to "go down" to see what the humans were up to at Babel, appeared to Abraham as a man, and even wrestled Jacob all night without pinning him for a three-count. The Elohist source[1] of Biblical texts had a slightly more exalted view of God: every time he appeared to men it was through a non-anthropomorphic device like a burning bush[2] which was called "The Angel of the LORD". When the Israelites rejected divine warnings and established a monarchy,[3] angels began to take on the roles of courtiers and soldiers in heaven[4] as servants of the "Lord of hosts".[5]

By the time of the post-Exile,[6] period, as Jewish priests began to piece together the Yahwist[7]and Elohist documents with Deuteronomy and their own home-grown stuff, God had been elevated even higher into the ionosphere, such that he didn't even show up as weird manifestations. He remained far off in heaven, and now the "Angel of the LORD" was one of many independent, winged, humanoid creatures who shuttled messages from God to the Earth. They even had names such as Michael, Gabriel, Uriel, Raphael, Azrael, Punky Punkael, and the like.

(The only time in the New Testament when God really had to do his own dirty work was when he seems to have surreptitiously slipped a little something into the womb of an unsuspecting Virgin Mary, but depending on how it was done, that might have been mixing business with pleasure.)

Depiction of an angel from the 1500s.

Angels as they appear in the Bible are a very curious bunch. Sometimes they look like people, as the ones who visited Lot did, and were presumably extremely good-looking considering the entire town wanted to roger them senseless.[8] Sometimes they look like six-winged monstrosities that kiss burning coals, like the ones Isaiah saw. Sometimes they were wheels in the sky with many eyes or a mix of wings, human or animal heads, and eyes, like those seen by Ezekiel. There was a reason they stated "fear not" upon their arrival.

They also did bizarre things. Some of them merely imparted information, like the heralds of Jesus. Others, however, either killed people (including babies) or else wrestled people to the ground.

It's also worth noting that they were apparently extremely terrifying to look at (at least when they weren't being extremely sexy, see above); they almost always preface anything they have to say with the remark "Do not fear", owing to the fact that they most often resemble something out of a work by H.P. Lovecraft.

Judaism and later Christianity has classified

. Of course there're different ideas on where to put

an angel who has received a name.

The modern depiction of them as Tolkienesque elves-like pretty people with (usually white and very often too small to be useful at all to fly) bird wings is mostly due to Victorian artwork[note 1] (which, of course, are the same people that brought us pretty little fairies that don't kidnap your babies and Fluffy Cloud Heaven[note 2]); an aversion of that trope is in the television show Supernatural; when the first angel to actually appear does so, his "voice" is a supersonic effect that shatters glass and causes bleeding, and when a medium forces him to show himself to her, the sight of him blinds her. The angel, named Castiel, brushes it off as saying that "(his) true form can be a little overwhelming for humans.". Another modern example that diverges of the typical depiction of angels as handsome winged beings is famous Final Fantasy's Sephiroth in his final form[note 3].

While most people think of angels as being of pure holiness and light (a Victorian-era image), note that they are not all good.[note 4] According to both Christianity and Islam, a substantial number of angels rose up against God and were punished by being sent down to either Earth or Hell.[9] In Christianity, it was because they wanted the same power as God. According to traditional Islam (and Milton's Paradise Lost), it was because they refused to bow down before Adam, the first man. An oddA distinctive splinter-group, the Yezidi, claim that because they refused to bow before anyone other than God, these angels were in fact exalted. No matter which version you go with, Satan is the leader of these renegade angels.[10]

There were also the grigori, or watchers, a class of angels with the job of keeping an eye on humanity.[11] Some got a little too attached and started fornicatin' with their charges, fathering the nephilim, a race of half-human demigods (including Goliath). For this, they were thrown out of Heaven.

The aptly named Angel Moroni played a major role in inventing the Mormon religion.[12] For this, Moroni is universally considered the worst angel of all time.

Most angel names end in the suffix -el, which in Hebrew means "God." In the 1800s, many magicians would claim to summon the power of angels to help them perform strange feats. In order to be really impressive, they made up lots and lots of new angels by adding el to the end of nonsense, like Jor-el and Kal-el.

Most Christians and Muslims refuse to worship angels, claiming that only the supreme god is worthy. However, an increasing number of neopagans have begun worshipping and supplicating angels, either in place of or in addition to traditional gods. Traditional neopagans greatly frown on this practice, claiming that it makes claims to neopaganism meaningless, but at least one really popular neopagan writer (Silver Ravenwolf) has openly endorsed it, particularly as a way for young neopagans to hide their true faith.

Your guardian angel is a special angel assigned to look after you personally during your life. Christianity, Judaism, Islam and Zoroastrianism include belief in guardian angels. A lady claims that when she was upset and stressed out, she had an apparition in the middle of the night. No, it couldn't have been a dream, lucid dream, hallucination, sleep paralysis, overactive imagination, or fiction dressed up as fact — or, for that matter, some spirit or lowercase-g god or something yet more obscure originating from one of the world's massive number of religions that don't include angels and have just about as much credibility as the ones that do. It had to have been her guardian angel. Anecdotal evidence like that abounds but somehow, proof is lacking. [13][14]

The collective term for a group of angels is a "choir". Choirs of angels can come in with different categories of angels, like archangels (not the city in Russia), thrones, principalities, dominions and powers. Plus cherubim and seraphim.[15] (Compare the ranks of the fallen angels, with their devils, demons, and imps. Plus succubi.[16])

Ready to give up and accept the idea of natural hierarchies of supernatural prestige and control, on earth as it is in heaven? - Perhaps that was the idea...

Angel therapy involves the idea that our guardian angels can help us achieve better health and happiness. As is often the case, this idea tends to be pushed by people who've borrowed the words "God" and "angel" from the Bible, but then pretty much disregarded the rest of the book.[17] Among its most famous proponents is princess Märtha Louise of Norway, as of 2016 fourth in the line of succession to the Norwegian throne and avid proponent of all things woo and holistic. She runs a rather popular "angel school", Astarte, which teaches students how to get in touch with the angels.[18] By contrast, Doreen Virtue talks to angels on your behalf.

The other wiki's article on angels