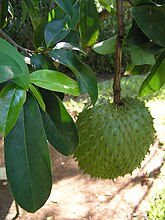 Graviola, soursop or guanábana (Annona muricata) is a fruit native to the humid regions of Central and South America. A formerly obscure fruit for those not in those regions, it has gained some notoriety for being promoted as an alternative cancer treatment.

The fruit itself is not the active ingredient studied, but rather extracts from seeds, leaves, bark, and twigs of the plant.[1] The fruit itself is tasty and probably harmless in moderation. A 1996 study[2] did find extracts from the seeds to be potent against colon adenocarcinoma cells. However, it was performed with an in vitro sample of cells and not humans, and was only compared to one kind of chemotherapy drug.

Graviola extract has been proven to be neurotoxic. A study performed by the Memorial Sloan Kettering Cancer Center showed a high frequency of Parkinson's disease in the French West Indies, where Graviola is popular as food and medicine. The source of the disease was dopamine-degenerating alkaloids in seeds and roots.[3] So, not only is it ineffective, but dangerous if used carelessly.

This alternative medicine-related article is a stub.
You can help RationalWiki by expanding it.
Retrieved from "https://rationalwiki.org/w/index.php?title=Graviola&oldid=2385018"
Categories:
Hidden categories: