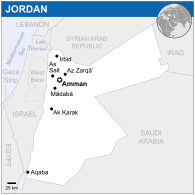 Jordan (officially the Hashemite Kingdom of Jordan) is an Arab kingdom in the Middle East, located on the East Bank of the River Jordan. Jordan borders Saudi Arabia to the south and east, Iraq to the north-east, Syria to the north, and (perhaps most famously) Israel to the west, with whom they share control of the Dead Sea. It is what remains of the once great power of the Hashemite family.

Following the end of the British Mandate, Jordan was given its independence. King Abdullah I became ruler of what was known as "Transjordan" on May 24, 1946. King Abdullah ushered in the era of modern Jordan and made the country a key player in the conflicts of the Middle East.

Jordan today is known for being more peaceful and sane than any of its neighbors (which isn't saying much), its booming Syrian refugee population, its on-and-off relationship with fundamentalist Islam, its repeated armed conflicts with Israel (usually at the behest or on the behalf of its neighbors), and being the first Arab country to form a free trade agreement with the United States.

The setting of the stage[edit]

Though existing in both name and deed beforehand, modern Jordan took form in the early 20th century. Following the Arab Revolt which took place during the First World War, an uprising which was instigated and armed by the British to combat the Ottomans, what is now Jordan became the British Mandate of Transjordan. The country would stay under British rule, and the name Transjordan, until the end of the British Mandate in 1946.

For the next two decades or so Jordan became a major player in the Middle East. During the 1948 Israeli war for independence Jordan invaded the newly-formed nation of Israel along with Egypt, Iraq, Syria, and Lebanon. After their loss in the war Jordan, in 1950, recuperated by making significant land gains in places such as the West Bank and East Jerusalem, leading to much disdain among its Arab neighbors.

Jordanians during the WWI-era Arab Revolt.

After the 1950s, Jordan went into a period of "Arabization," discarding its British colonial roots. Jordan expelled all foreign personnel and, in 1957, ended the Anglo-Jordanian treaty, breaking all residual ties to its former colonial ruler. Over the next twenty years, Jordan armed itself and was involved in the Six-Day War

, along with its allies Egypt, Syria, and Iraq. Besides some internal strife over separatist terrorist groups such as the PLO and the Palestinian "Fedayeen," Jordan was relatively quiet, until the outbreak of the Yom Kippur war. Jordan was again on the losing side, teaming up with Egypt, Iraq, and Syria. Though for once Jordan was not on the side of the belligerents, coming to their ally Egypt's aid after a surprise Israeli airstrike.

In 1985 Jordan rescinded all of its claims to the West Bank in order to promote a Palestinian government in the "Palestinian Free State." It was at this point that the reigning king of Jordan, Hussein, decided to dissolve his parliament, and any hope of future democratic influence in Jordan along with it. In 1994 Jordan decided it was time to bury the proverbial hatchet with its former enemy, and signed the Israeli-Jordanian peace treaty, which effectively (at least on paper) ended the threat of war between the two nations for the foreseeable future. Israel, however, would continue to strain this relationship, taking advantage of their new found peace to assassinate leaders of the terrorist organization Hamas that were residing within Jordan's borders.[1]

Jordan is currently ruled by King Abdullah II, who is by all means a relatively progressive leader as far as Middle Eastern monarchs go. Abdullah brought foreign investment and trade to his country, going so far as to designate special development zones inside his country in an attempt to develop industry and technology. Jordan has significantly improved its GDPPC since Abdullah's ascension to the throne, and the country's economic growth has doubled to almost 6% annually under Abdullah. All of the economic improvements culminated in the United States signing a free trade agreement with Jordan, its first with any Arab country, and only the third the U.S. had ever signed. Jordan backs the rebels in Syria, giving them rifles, anti-tank missiles, bullets, and money. Jordan denied that it's doing this, and shifted its stance in Syria to promote a diplomatic solution, much to the behest of the rebels. Jordan has come a long way since its people were riding around in the desert with T.E. Lawrence on camels.

The lives of others Jordanians[edit]

Jordan, along with many other traditionally Islamic countries of the Middle East, has a hankering for democracy which its ruling monarchy has to contend with almost perennially. King Abdullah II, in response to the growing domestic and regional distress that led to the eventual Arab Spring, replaced his prime minister in 2011 and told the new prime minister to "take practical steps, quick and concrete, to launch a process of genuine political reform."[2] Although the king called for immediate revision to laws and government policies in relation to public and political freedoms, there is a growing concern that he may have just been throwing his people a bone, and actually had no intention of helping to foster a democracy. The new prime minister was displaced in October 2012, when the king dissolved his parliament, and called for early elections, leading to the appointment of a brand new prime minister, and a continuation of the years of protest that preceded this.

Jordan is still categorized by the Economist Intelligence Unit as an "Authoritarian Regime", and displays many of the hallmarks of that classification. Jordan has a slew of militaristic policies, from conscription, to large military spending in order to compete with those of surrounding nations. Jordan does have free parliamentary elections, at least when said parliament is not being dissolved by the absolute monarch. Both men and women have the right to vote, and voting rights are rarely violated.[3]

Jordan's House of Representatives in 2018. Note the scattering of hijab-clad women.

Women are enfranchised in Jordan (and have been since 1974), and have more civil liberties than in other Islamic nations such as Iran, Iraq, Afghanistan, and Saudi Arabia. Women can legally own and operate vehicles, and may not be denied a job that they are qualified for. Women still endure some injustices, notably pay inequality, and there have been reports of sexism in hiring practices for many of the new Jordanian industrial firms. Women who do not strictly obey Islamic practices are not as subject to persecution as in more devout nations (i.e. places where Shari’a law is supreme), but still may take flak from their neighbors if they do not seem to be following Islamic principles.

Homosexuals enjoy more rights in Jordan than in any other Middle Eastern country, apart from Israel and arguably Turkey. Homosexuality, in private between two consenting adults, is legal in Jordan and there is a small gay scene in Amman, but the highly conservative and religious atmosphere in the country makes most gay men stay closeted. Though honor killings for engaging in "haraam"[4] behavior are illegal, if an honor killing occurs, the court system will rarely be able, or even seek, to punish the offender. If you are a transsexual, or transvestite, or anything else anywhere on the spectrum that doesn't lean towards "normal", you will have trouble being open with your sexuality or gender identity in Jordan.[5]

Jordan is a majority Muslim nation. Islam is part of the daily life of people in Jordan, and it dictates many people's social roles as well as daily life. Some, but not all, of the the country's laws and court systems are based on teachings of the Qur'an.[6]