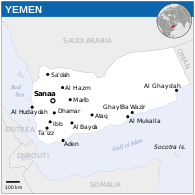 The Republic of Yemen was formed in 1990 by the unification of South Yemen (a Marxist state) and North Yemen (a reactionary absolute monarchy that turned into a conservative republic). A brief civil war in 1994 after southerners were ejected from the national unity government brought the country under the dictatorial rule of Ali Abdullah Saleh. After a protracted popular struggle, he was forced to resign in 2012. The country is torn by both Islamist and southern separatist insurgencies, and the central government exercises little authority in tribal areas, much like the situation in Afghanistan and Pakistan. Al Qaeda has a strong presence in Yemen, being the location of the USS Cole Bombing.

For the most part, the average citizen is too busy trying to scrape together a living to actually care about foreign politics, which does not endear the average Yemeni to the US whenever a militant is hit in an airstrike. Al-Qa'eda controls dozens of towns and villages in the desert, along with a wide area of empty land. It has the lowest level of gender equality in the world.[1]

See the main article on this topic: Yemeni Civil War

Yemen is a religiously mixed state, with 56% Sunni Muslim and 44% Shia, each having its own region of the country. Relations were always very tense, especially with the (Sunni) Saudis trying to decrease Shia influence on their southern border. From 1990 to 2012, a Shia guy called Ali Abdullah Saleh, who is Shia, was president. He used to be president of North Yemen. During the Arab Spring, there were calls by many, mostly Sunnis, for him to resign. He agreed, and his deputy, a Sunni called Abd Rabbuh Mansour Hadi, took control.

While all of this was happening, the Shia Houthi movement was growing in the country's north. In 2009, after fighting with the government, the Houthis controlled the northernmost province, their stronghold. After Saleh resigned, the Houthis became even more militant and launched a military campaign to take over all Shia areas. The Houthis then took control of Sana'a, the capital city of Yemen, after besieging government forces. Abd Rabbuh Mansour Hadi fled and said he was the country's rightful president, urging international military support for his troops. The Houthis then led a military campaign to take over the entire country, including Sunni areas. They entered several southern cities and attacked Aden, the second-largest (and a Sunni) city.[2]

The Saudis, along with a coalition of other Sunni states backed by bottomless US support, started bombing Houthi-controlled areas of Yemen. Quite literally so, as they bombed not only legitimate military targets, such as supply depots and fighting positions, but also ceramic factories, hospitals, weddings, funerals, schools, and civilian neighborhoods. This bombing killed thousands of civilians, although most Western news does not cover it.

In short, the Houthi advance was halted and driven out of Aden and other southern Sunni areas, but thousands of Saudi and other foreign troops were sent to the country to militarily conquer it. The Saudis and their allies have besieged the country, stopping anyone from getting in or out and effectively guaranteeing massive civilian casualties due to food and water shortages. This has caused a famine that affects over 21 million people.

This nationalism-related article is a stub.
You can help RationalWiki by expanding it.
Retrieved from "https://rationalwiki.org/w/index.php?title=Yemen&oldid=2466389"
Categories:
Hidden categories: