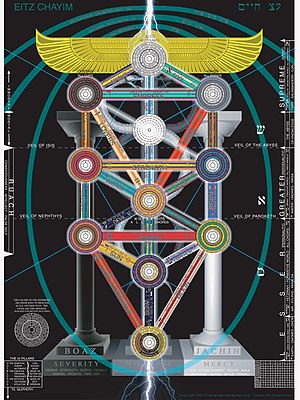 Kabbalistic Tree of Life, festooned with complicated associations with numbers, Tarot cards, astrological symbols, and names of God. It's quite complicated but by no means complete. It would make an excellent pinball table.

and other bodies of occult lore into a coherent body and doctrine.

Many of these pseudosciences, protosciences, or bodies of occult belief are themselves quite ancient, and predate any body of learning that can claim this title (for instance, some of the various texts associated with Hermeticism such as the Corpus Hermeticum were actually written during antiquity, in the 2nd and 3rd centuries CE). Rather, Western esotericism is an attempt to cobble together a seamless web of occult concepts.

; and Renaissance Neoplatonism also influenced the movement. But as a thing in its own right, self-identifying as a body of lore that constitutes "Western esotericism", it is a project that can't be dated much earlier than the second half of the 18th century, even if many of the constituent elements are much older. As such it is a product both of the Age of Enlightenment and of the reaction against the Enlightenment; when wannabe magi turned from the cold gaze of science towards the warm embrace of woo, they still wanted coherent and systematic woo.

Martinism, Rosicrucianism, the Theosophical Society and the Hermetic Order of the Golden Dawn are key institutions that assisted this process, along with occult writers such as Francis Barrett (author of The Magus) and the French occultists Eliphas Lévi (Alphonse-Louis Constant) and Papus (Gérard Encausse).

Initiatory secret societies such as Freemasonry were popular during the period. As such, many magical organizations were constituted as secret societies which imported a great deal of their ritual and costuming from Freemasonry and from similar groups. Many claimed to be in touch with the Great White Brotherhood, Ascended Masters, Secret Chiefs, or similarly hard-to-contact bodies of enlightened mystics, and that their teaching and authority derived from those sources.

During the 19th century, after Jean-François Champollion deciphered hieroglyphics, Egyptian themes often figured strongly in the "tradition", as did motifs from Hinduism and Buddhism. Towards the end of the 19th century, the Theosophical and Rosicrucian streams in the tradition parted company somewhat. The Theosophists incorporated more Hindu and Buddhist mystical themes into their version, and eventually relocated to India.

At the same time, the Golden Dawn, back in England, had its brief heyday and acrimonious collapse. At its heights the Golden Dawn attracted literary figures like William Butler Yeats, Algernon Blackwood, Sax Rohmer, Bram Stoker, and Arthur Machen, and other cultural figures such as the actress Florence Farr and the artist Pamela Colman Smith. Aleister Crowley usually cops the blame for the collapse of the Golden Dawn society, but many contradictory accounts exist.

In the second part of the 20th century, the Egyptian Sun tended to yield his place to the Goddess's Moon, and the influence of earth religions and neopaganism, especially in its Wiccan forms, became much more prominent.

No single group can be expected to pick up every thread in this complicated weaving together of magical ideas from multiple sources; but hardly any variety of Western occultism still exists that has not been cross-pollinated by some of the others. As such, there are many streams and flavors that draw on this source. Some, like the Hermetic Order of the Golden Dawn and its several heirs and offshoots, still seek to incorporate much of the lore into their own systems. Some themes recur, having been sown among all of these bodies of wonderlore. Aristotelian physics is a frequent theme; the classical elements of earth, air, fire, and water play large roles in just about everything from astrology to tarot divination.

Wicca itself is one such offshoot; its claimed links with traditional witchcraft are its own, but the original versions drew on Freemasonry for some of their ritual, and published poetry by Charles Godfrey Leland, Aleister Crowley and others for its liturgy, and freely incorporated herbalism, Tarot, and in some variants even Kabbalah. The Brazilian Umbanda worships African gods and native Brazilian spirits; but it incorporates Western magical symbols and European séance spiritism from the French Spiritist Alain Kardec.

Many forms of Satanism borrow from the tradition to some extent; Anton LaVey's Satanic Bible contains more misotheism and egotistical exhortations than actual claims to communion with demonic powers, but the tradition borrows trappings from ritual magic like the "Black Mass", and also borrows John Dee and Edward Kelley's Enochian keys, texts from Elizabethan England that purport to be the language of angels or demons.

To the Western occultist, the 22 "Major Arcana" of the tarot deck[1] are assigned to the 22 letters of the Hebrew alphabet. Astrological and alchemical symbols are believed to be present in the cards as well, and to be guides to their interpretation, as is Kabbalistic numerology. The suits are assigned to the four classical elements (and the assignments vary from one interpreter to the next), relating them to alchemy. The sequence of cards is said to conceal an initiatory ritual or spiritual path, relating them to the practice of magic.

By these methods, Western occultists attempt to give coherence to what had been separate and independent traditions of occult folklore. Aleister Crowley's 777 is one of the more elaborate attempts by magicians to create a vast table of correspondences — an attempt to link, well, all sorts of things: numbers, Hebrew letters, Tarot cards, gods, angels, demons, animals, perfumes, colors, precious stones, and geometric shapes, and quite a few other things beside — and to elaborate their secret connections with other magical concepts. The goal here is to create a magical world that exists in parallel with the physical one, in which not only birds can be omens, but the occultist can give a reason why the bird was an omen, which can be articulated to a fellow occultist. Meditation and visualization on the imagery and associations that correspond to the occultist's magical or ritual goals are key components of the practice. Astral projection is cultivated by some; magicians travel to the several astral planes represented on the Tree of Life (no, not that tree of life), which they recognize by the symbols woven into the astral landscape.