Where it was at.

Phoenicia was a middle eastern Semitic civilisation based around modern-day Lebanon from around 1500 BCE to the 1st century BCE. Its inhabitants were great seafarers and travelled the Mediterranean, and further afield — although exactly how far is the subject of a large amount of woo and pseudohistory.

They founded Carthage in north Africa, pioneered celestial navigation and invented the first alphabet. But they were badly beaten up by the Persians under Cyrus the Great, and then by Alexander the Great, before becoming part of the Roman Empire. 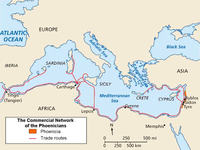 We can be pretty sure the Phoenicians really did go to these places.

We have good archaeological evidence that they traded the length of the Mediterranean, from Egypt to the Strait of Gibraltar. They seem to have also traded up the Atlantic coast of Iberia (Spain and Portugal), around the coast of Africa as far as the Gulf of Guinea, and down the Red Sea to what is now Somalia (or what was Somalia till recently).[1]

One DNA study has shown that as many as 1 in 17 men in the Mediterranean could trace their male ancestry to a Phoenician.[2]

There are claims that they visited Cornwall in southwest England to purchase tin, although the evidence for this is not certain.[3] The Greeks made vague references to the Cassiterides or Tin Islands off the west coast of Europe, but the descriptions don't match any actual geography.[4] There is better evidence that the Phoenicians traded tin on the Atlantic coast of Iberia, which is much less of a journey.[5]

Claims of Phoenician visits to Britain are also connected to legends that Joseph of Arimathea and that Jesus visited England (see: Lost years of Jesus.)

Such connections were eagerly claimed because the Phoenicians were seen by 19th-century British imperialists as precursors of the British Empire, being arch-capitalists, avid merchants and rulers of the waves.[6]

According to myth, the Phoenicians visited Ireland, where Fénius Farsaid (a.k.a. Fenius Farsa, etc.) having tried to build the Tower of Babel supposedly invented the Ogham alphabet and Gaelic language.[7] This is most likely bollocks.

The first circumnavigation of Africa round the Cape of Good Hope is generally attributed to Bartolomeu Dias in 1488. Herodotus claimed that the Phoenicians circumnavigated Africa, and between 2007 and 2010, British sailor Philip Beale sailed a Phoenician-style boat around Africa to prove such a feat was possible.[8] Even if it's possible for someone who knows the way, that does not prove the Phoenicians actually did it. They would have to trade with the natives for food and avoid both shipwreck and murder, without any of their own trading posts to supply them.

Other dubious theories, advanced by fringe crackpots from the late 18th century onwards, have them visiting the Americas. Ezra Stiles believed petroglyphs on Dighton Rock at Berkley, Massachusetts, were Hebrew; similar ideas fed into Mormonism. An inscription discovered at Paraíba, Brazil in the 1870s was also believed to be of Semitic origin. Phoenician coins allegedly found in the Americas have been proven to be forgeries.[9]

More recently, Mark McMenamin has claimed that Phoenician coins show a map including the Americas.[9] The actual map is very small and incredibly indistinct[10] and it could equally well be the Canary Islands, Britain, the Azores, or many other things.

In contrast, Glenn Markoe and Ronald H. Fritze have noted the absence of evidence: if there was a lasting settlement such as that the Vikings left in Canada, we would have found something, so although there could have been brief contact, such as by shipwrecked sailors, it is unlikely.[9]

Following his circumnavigation of Africa, Philip Beale planned to cross the Atlantic in a Phoenician boat[8] but there doesn't seem to be evidence that he ever managed it, with the difficulty in getting funding and the risk of being dead. Captain Beale made landfall in the Dominican Republic on 31st December 2019 after 39 days at sea.