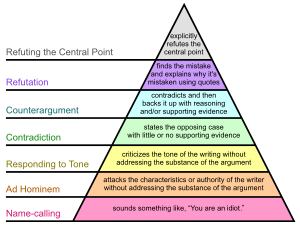 The hierarchy of disagreement.

in his 2008 essay How to Disagree.[1] Graham's hierarchy has seven levels, from name calling

to "Refuting the central point". According to Graham, most disagreements come on one of seven levels:

This logic-related article is a stub.
You can help RationalWiki by expanding it.
Retrieved from "https://rationalwiki.org/w/index.php?title=Hierarchy_of_disagreement&oldid=2165555"
Category:
Hidden category: