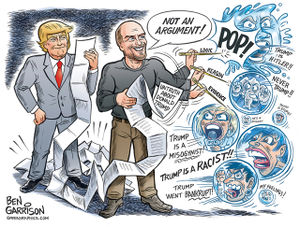 The phrase "not an argument" fallaciously dismisses arguments that are phrased as bald assertions. For example, the following exchange is common:

Takes one to know one[edit]

In the above example, the phrase "Trump is racist" is likely short for the following syllogism:

As should be clear, this is an argument.

If this is what the speaker is implying, then the assertion that this claim is "not an argument" is logically incorrect. And if so, the response that "this is not an argument" does not actually refute any of the syllogisms' points.

Of course, this same logic can be applied to the statement "not an argument" as it is an enthymeme for the following chain of reason:

Instead, a proper response to the above argument would be to ask What is your argument? Their response should enlighten you of the syllogism that their statement is shorthand for.

Afterwards, using the above example, you can rebut one of the premises involved:

Non-arguments all the way down[edit]

Expecting all discourse to be an argument:

Any discussion taking pretense or structure of formal debate should use appropriately constructed arguments with clear conclusions and specifically cited evidence and logical deductions. In such cases, these concerns are directly addressed by the assumptions of the format.

Stefan Molyneux, the creator of the phrase, wrote a book on logic that confuses logical validity with logical soundness (and contains numerous fallacies throughout).[3] Perhaps as a result, Molyneux mostly uses "not an argument" as a bludgeon against opposing viewpoints. As such, the above concerns might be above the level of discourse that "not an argument" usually operates in: that of insults and ad hominem attacks.

Yes, there may be a case for a statement being "not actually a counterargument to the argument in question" or "not actually a position that can be falsified, and thus not even wrong". It's just that currently, a lot of current usage of "not an argument" is mixing levels of argumentation.