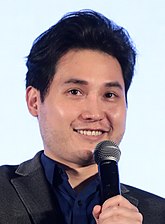 Andy Cuong Ngo (c. 1986–) is an American conservative,[2] j̶o̶u̶r̶n̶a̶l̶i̶s̶t̶ conservative activist, and a former subeditor of the alt-right-pandering online magazine Quillette with a fake British Accent.[3] Currently he is editor at large of The Post Millennial, a conservative news website operating out of Canada. Although he is gay,[4] he is predictably an anti-feminist and an Islamophobe, thus a useful recipient of wingnut welfare.

He first attracted widespread criticism after publishing an opinion column titled "A Visit to Islamic England" in the Wall Street Journal.[5][6] He has been described as "one of the leading amplifiers of Islamophobia in US."[7] Lately he has refocused his brand on targeting leftist activists, promoting the "antifa are the real fascists" narrative.[8]

members conspired to commit assault.[9][10] We're sure it's unrelated.

Here is a sad and fascinating look at how an insecure guy with no friends or job, bullied for his weight, race, and sexuality, might cure his pain and alienation by finding a home as a propagandist for violent fascists who hate most of what he is.

On his Patreon page, Ngo describes himself as "an independent journalist and photographer dedicated to covering topics related to the far-left and hate crime hoaxes."[11] As the following sections will show, Ngo allows his agenda (made clear in his Patreon page) to define his journalistic product.

Ngo was editor of Quillette until being dismissed in August 2019.[9] Afterwards, Ngo became editor-in-chief of Canadian website The Post Millennial, which Media Bias Fact Check rates as "Right Biased based on story selection that favors the right and Mostly Factual in reporting, rather than High, due to publishing unsubstantiated claims and having one failed fact check."[12]

AllSides initially rated Ngo's work as "Center bias[ed]" in July 2019 but changed it to "Lean Right" in November 2019 explaining: "When reporting, Ngo reaches out to sources on both the left and right in order to secure quotes and perspectives from people on both sides of the political spectrum. Ngo often chooses to report on topics that those on the center-right would view as the excesses of the progressive movement, such as hate crime hoaxes and violence by far-Left political groups."[13]

As a graduate student at Portland State University, Ngo was dismissed from his position as multimedia editor of student newspaper The Vanguard. Ngo says that the cause was merely tweeting a video of a Muslim student describing what the Quran says about killing apostates.[14] However, Ngo's tweet brings up some ethical issues: he tweeted that video while not in his official capacity, and the tweet caused the student speaker to be targeted for threats and harassment due to attention from outlets like Breitbart.[15][16][17]

In 2018, Ngo had a column "A Visit to Islamic England" published in the execrable Wall Street Journal opinion section. It controversially describes London as "failed multiculturalism",[18] has been described as "utter nonsense"[19] and a "dishonest race-baiting article" by someone who actually lives in Whitechapel, the area of London Ngo had briefly visited.[20]

Several of Ngo's statements and claims were disproved by a Tower Hamlets Council spokesperson, for example Ngo had incorrectly tried to link a street alcohol ban specifically to Islam (echoing the conspiracy theories of no-go zones and Eurabia), not realising "no drinking zones have been introduced by many councils across the UK to tackle antisocial behaviour linked to street drinking."[21]

Demonizing anything remotely associated with the left wing[edit]

Ngo will gleefully jump at the opportunity to post stories that demonize groups that his followers dislike, even if it means throwing other LGBT people under the bus. For example, Ngo posted a Twitter thread describing details of an alleged murder by two transgender people of one suspect's mother.[23] There are many other examples of transphobic story selection.[24]

In addition, regarding a photo of a man yelling at two state police officers during a protest against COVID-19 shelter-in-place orders at the Michigan capitol, Ngo correctly pointed out that some tweets misidentified the man in the photo.[25] However, 15 minutes later, Ngo cherry-picked the man's political views:

Brian Cash is a 'marijuana rights' activist who says he voted for Bernie Sanders in the primary...[26]

This tweet tells only part of the story and is slightly misleading, giving readers the impression that Cash voted for Sanders in the 2020 presidential primary. In fact, the source cited earlier by Ngo specifically said:

Cash, who expressed dislike for both the Democratic and Republican parties, said he voted for Bernie Sanders in the 2016 primary, and then Donald Trump in the general election.[25]

In May 2019, Ngo was pepper-sprayed by an Antifa protester in Portland, Oregon.[27] Afterwards, Ngo doxed a person who'd been knocked out by a Proud Boy at the same rally. It was later stated that her spine had been broken in the process.[28]

In June 2019, Ngo was kicked, punched, "milkshaked", and silly-stringed by antifa protesters in Portland, Oregon, and ended up in the hospital.[29] Right-wing media widely claimed that Ngo had had a brain hemorrhage. If so, he improved remarkably quickly -- Ngo was discharged and appeared on Fox News the next day.[30] Right-wing media also widely claimed that Ngo had been attacked by a "cement milkshake", including Fox News[31] (who later backtracked their coverage)[32] and Ted Cruz. Such a milkshake, if used, would not be effective as mixtures with more than 1% sugar prevent cement from settling.[33]

Ngo's reporting about these protests is full of misinformation, as shown in a Twitter thread by @RespectableLaw from August 2019.[34]

Ngo is notorious for doxxing a number of left-wing activists, including minors, as real journalists apparently do.[35][36][37] In 2019, a "kill list" of activists publicly identified by Ngo began circulating within white supremacist groups, culminating in the arrests of multiple neo-Nazis charged with plotting attacks on those named in the list.[38][39][40][41] Activists who have been identified and had personal information shared by Ngo on Twitter have frequently been the target of harassment campaigns by his legion of brainwashed followers, most of who bemoan "cancel culture" but don't seem to mind it when it targets liberals or left wing activists.[42] One of Ngo's doxxing victims had her spine broken by a Proud Boy during the 2019 May Day protests, shortly after Ngo identified her publicly.[43] An article featured in Jacobin Magazine detailed the experiences of several of Ngo's targets[44]:

"Jacobin has talked to six people in Portland, including journalists, political officials, and activists, who described harassing messages and threats of violence resulting from Ngo’s work or political involvement in Portland. Friends of two other activists claim they went into hiding after Ngo spread their names and they became targets of harassment. Some individuals who’ve tangled publicly with Ngo are reluctant to go on the record. They say they want to avoid the “trauma” of being subjected to a new round of death threats."

Ngo is no stranger to being doxxed himself. His information has been posted several times in recent years, most recently by an anti-police website "whose stated aim is to track police brutality but also has galleries of what it calls 'Snitches' and 'Cop Callers.'"[45][46]

Following the 2019 arrest of actor Jussie Smollett for lying about a hate crime, Ngo jumped on the "dismiss hate crimes as hoaxes" bandwagon. Ngo appeared on a panel alongside Ben Shapiro and Sally Kohn on a February 2019 episode of the Dr. Phil talk show about hate crimes and why people would lie about them.[47] In June 2019, the Manhattan Institute's City Journal published a guest article by Ngo, "Inventing Victimhood," in which Ngo nutpicked "dozens of [...] examples" to reach a hasty generalization: "...our institutions of higher education too often doubl[e] as 'hate-hoax mills,' encouraged by a bloated grievance industry in the form of diversity administrators."[48] While advocates of raising awareness of hate crimes ought to have more due diligence in verifying evidence, Ngo's theory fails to account for thousands of hate crimes reported per year; it would be absurd to assume that a significant enough majority would be lies.[49] Besides, Ngo might want to have a talk with his right wing media allies about inventing a brain hemmorhage caused by Antifa. He also posted a misleading edited video that portrayed a person who was attacked by a Proud Boy as the aggressor.[50]

In February 2021, Ngo was invited by Republicans to a Congressional Hearing on "Crime, Terrorism, and Homeland Security". Even before the hearing itself, numerous professionals and academics who actually study terrorism argued this would seriously "set back efforts" to tackle domestic terrorism.[53] To quote a YouTube comment on the hearing: