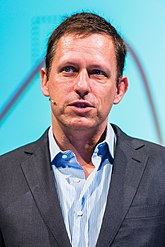 Peter Andreas Thiel (1967–) was born in Germany and raised in the US. He is a citizen of both the US and New Zealand, though there is suspicion about the circumstances under which Thiel became a New Zealand citizen.[1] Thiel is a hedge fund manager and venture capitalist. He was a co-founder of PayPal and later used the proceeds from the sale of PayPal to make early investments in companies such as Facebook, where he made most of his fortune.

Thiel has gained significant publicity from being a homosexual who openly supports Republican politicians, including anti-gay Vice President Mike Pence. He has also gained ire in the media for funding multiple lawsuits against Gawker

and its subsidiaries, leading to Gawker's bankruptcy.[2] Thiel has been funding a network of anti-liberal Christians at Cambridge University, many of whom have links to racist and authoritarian ideas and figures such as Toby Young and Charles Murray.[3]

Thiel made his first large investment by co-founding PayPal in 1999, giving the company $500,000 and taking partial control over its business decisions. His original goal was to promote PayPal primarily as an online currency exchange,[4] but its secondary purpose of processing credit cards and wire transfers for eBay was far more popular and, most importantly, more profitable.[Note 1]

Thiel's half-million dollar investment in PayPal grew to $55 million after PayPal's IPO in 2002.[5] To date, this is Thiel's highest-yielding investment as an annual percentage.

Thiel used the capital gains from his sale of PayPal stock to create Clarium Capital in 2002, a hedge fund that charges large "performance fees" for gains in place of a flat maintenance fee.[6] The fund made its primary gains by betting on oil price spikes in the mid-2000s.[7]

In 2008, Thiel used the Austrian school of economic reasoning to predict the following:

Founded in 2004, Palantir Technologies is a private software firm that specializes in writing custom software to analyze large sets of data. Its largest sources of revenue include the CIA, the Department of Homeland Security, the National Security Agency, and the Federal Bureau of Investigation as customers.[9] Palantir was sued by the U.S. Department of Labor in September 2016 for systematic hiring discrimination against Asian job applicants.[10]

Thiel considers himself a libertarian who subscribes to the Austrian school of economics. This is ironic, considering the most outspoken member of the Austrian school is Hans-Hermann Hoppe, an extreme homophobe. Also, much of Thiel's income comes directly from being a contractor for the American government.[Note 3]

Thiel also has a disdain for women.[Note 4] In a 2009 essay written for Cato Unbound, Thiel theorized that giving women the right to vote set the United States on a downward spiral:

The 1920s were the last decade in American history during which one could be genuinely optimistic about politics. Since 1920, the vast increase in welfare beneficiaries and the extension of the franchise to women — two constituencies that are notoriously tough for libertarians — have rendered the notion of "capitalist democracy" into an oxymoron. —Peter Thiel [11]

Peter Thiel subscribes to various woo, having grown up in California, and believing he is smarter than everyone else.

Thiel believes that frequent blood transfusions from young orphans can extend his life indefinitely.[12][13] This is the modern equivalent of bloodletting (or perhaps vampirism) and is nothing more than a panacea: "young blood" only replaces old blood, something the human body already does hundreds of times a day.[14]

Thiel also prescribes human growth hormone to himself, believing that it reverses aging.[15] The NIH condemns this practice, citing instances of diabetes, colon cancer, prostate cancer, and Hodgkin's lymphoma, among other side effects.[16]

Like many libertarians, he has flirted with seasteading, the concept of building a libertarian society in international waters, before deciding it's a stupid idea.[18][19]

Proponents of Thiel celebrate the verdict as a victory over tabloid journalism, while opponents consider the victory a chilling effect on freedom of the press. Either conclusion is extreme and is a result of the hostile media effect.

Before Gawker published its now-infamous article, Peter Thiel is totally gay, people, in 2007, writer Owen Thomas contacted Thiel, requesting a comment. Thiel did not object to the publishing of the article at the time. The article was not an attempt to demonize Peter Thiel; rather, it was a celebration of a homosexual who appeared to be a wealthy, well-adjusted individual succeeding in a world dominated by Bible-thumping Wall Street stiffs.

Thiel's objection to Gawker came only after his hedge fund company, Clarium Capital, lost billions of dollars in 2008 and 2009. In private, Thiel blamed the Gawker article for scaring away potential investors in the Middle East. Thiel was a very confident individual who considered himself too smart to lose money. Rather than blame his loss of billions of dollars on his own bad ideas, he sought a scapegoat.

Unfortunately for Thiel, suing a media company for calling him a homosexual would have gotten him nowhere. He could not sue for libel, since it's technically true that he is a homosexual.[Note 5] Thiel could not sue under any California privacy statute, since Thiel himself had admitted to being gay before the Gawker article was released.

Peter Thiel defends his funding of Terry Bollea's legal action against Gawker, claiming that "a single digit millionaire" could not afford a proper legal offense against a large media company.[22] This is patently false, particularly in Florida, where Terry Bollea's former friend Bubba The Love Sponge

(a.k.a., Todd Alan Clem)[Note 6] is also a single-digit millionaire. Clem brags that his litigation team has never lost a case, though nearly all of those cases feature "Bubba The Love Sponge" as a defendant.

Clem was a defendant in a separate case involving the sex tape.[23] Though "Bubba The Love Sponge" has a name that makes him sound like a dolt, he was smart enough to settle the case out of court for a mere $5,000.[24]

Clem has a unique position in the sex tape scandal because he is not just an accomplice: he is also a victim. The sex tape itself was part of Clem's home security system. Clem alleges that his former co-workers, Michael "Cowhead" Calta, and Matthew "Spice Boy" Lloyd, stole the recording and searched for a tabloid to sell it to.[25][Note 7] Clem also alleges Calta and Lloyd brokered the sale of the sex tape to Gawker through Don Buchwald. Calta and Lloyd were asking for "millions" but only received $8,000.

Journalists and media company executives — notably, former Gawker CEO Nick Denton — argue that litigating against media companies for publishing unsavory information about public figures has a "chilling effect" that will lead to censorship. Denton is correct, to a point.

"Whistleblower laws" already exist to defend journalists, employees, and activists in general from litigation for illicitly recording a newsworthy event. However, these laws only offer protection when the recorded act is illegal. Had the recording in Bubba The Love Sponge Clem's house actually recorded a crime, Denton may have had a valid defense in court. Having sex with your best friend's wife is not illegal in Florida.

Nick Denton does have a point about Peter Thiel's choice of action. The act of funding Terry Bollea's lawsuit against Gawker appears to be part of a larger action to destroy Gawker by any means necessary, a textbook example of "the ends justifying the means".

Thiel has funded another lawsuit against Gawker: a defamation case filed for Shiva Ayyadurai. Ayyadurai claims he invented email in 1978 (not Ray Tomlinson in 1971 as consensus reality has it), and claims that Gawker's refuting of Ayyadurai's claim had hurt his reputation.[Note 8] Gawker settled the case for $750,000, but only to close the case so that Gawker could be sold.[26]